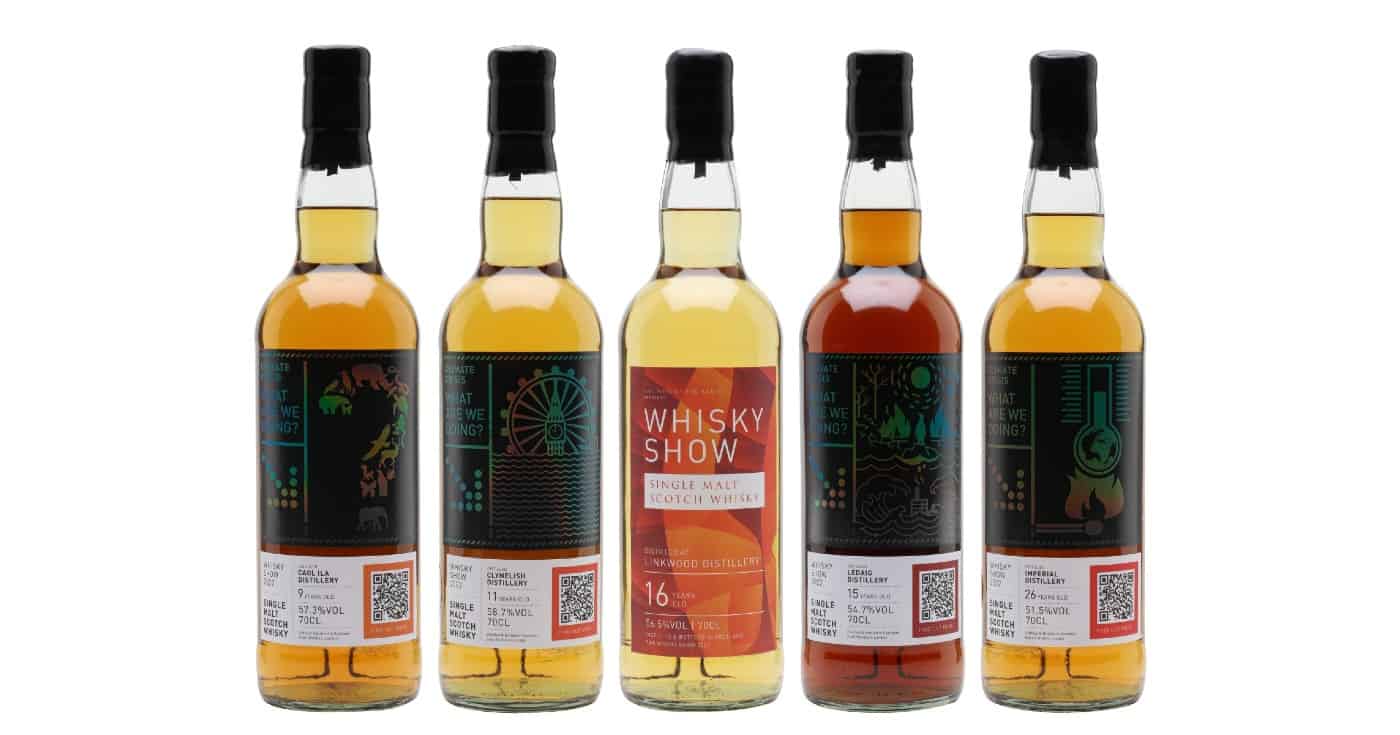 Ah yes, the Whisky Show. I’ve only been once (to the 2018 edition), but have very fond memories of it. Their yearly bottlings are highly sought after. This weekend will see London host the Whisky Show 2022, and a slew of bottlings have been announced. Bottlings of Linkwood, Caol Ila, Ledaig, Imperial and Clynelish are waiting to be scooped up by the many thousands descending onto the UK capital.

As has been the case for many years, Elixir Distillers’ creative director Raj Chavda has been tasked with finding a theme and creating artwork for the Whisky Show 2022 bottlings. This year’s bottlings illustrate a disheartening but urgent message: our climate is in crisis, it impacts the whisky industry, and we need to do something.

The From Grain to Green theme inspired the designs for the Caol Ila, Ledaig, Imperial and Clynelish (the Linkwood is just a ‘regular’ show bottling`). The labels have been printed using heat sensitive ink, turning black when cold but springing into life when heated. In other words, they react to changing environmental conditions.

“If you buy one of these whiskies in October, the overall cooler temperatures will make the labels look quite black,” explains Raj. “You’ll have to hold your hand on them to reveal the colours and see all of the design. But in the summer, particularly on a really warm day, you’ll be able to see it quite clearly. Each label essentially works like a thermometer.”

Nose: Touches of lemon curd with grainy pears and apple peel. Overall a lovely fruity nose, but I also get barley husks, maple syrup and a whiff of nail varnish.
Taste: Fairly creamy mouthfeel and the arrival is somewhat hot. A pinch of chili peppers. There’s some subtle oak, cloves and roasted hazelnuts, but also a nice minerality, elderflower liqueur, orange peels and overripe red apple.
Finish: Somewhat grassy and herbal, but ending on orchard fruits.

Conclusion
This Linkwood 2006 16 Years could use a little more polish on the palate, but the nose is very attractive, albeit fairly gentle.
8.5

Nose: Bright orange-y notes to start things off, followed by mineral touches, grape must and soft whiffs of stone fruits. Just a hint of beeswax, burlap and soft herbs too. Very elegant.
Taste: A little more oomph than the nose suggests, which is good. Creamy, almost waxy with a warming pepper-y arrival highlighted by vanilla custard, baked apples and honey, but also cotton candy. Maybe even a hint of grapefruit.
Finish: A hint of bitter oak, stone fruits and lingering honey. Medium.

Conclusion
As elegant as the nose was, I didn’t expect such a relatively muscular palate, which was a pleasant surprise. A fruity Imperial 1996 26 Years with plenty of oomph.
9

Conclusion
A fine drop with a winning nose, this Clynelish 2011 11 Years bodes well for future, hopefully slightly older releases from this or similar vintages.
8.7

Conclusion
Excellent whisky, but it feels like there are dozens of these young Caol Ila being released every month. That’s a testament to Caol Ila’s consistency, but it’s not exactly a singular release.
8.6

Nose: Notes of tar, earthy peat smoke, burnt caramel and luscious fruits all intertwine, with just a whiff of sulphur in the background. There’s plums, blackcurrants and raspberries, with finally some raw teak wood. Impressive.
Taste: Oily mouthfeel with dry oak, seaweed and ashes, but also cherry syrup, dark chocolate and a whiff of gunpowder and pepper, accompanied by beef jerky and dried red fruits. And quite a bit of peat smoke, of course.
Finish: Sweet, dry, briny and peaty. Very long.

Conclusion
A well-integrated single malt from the Isle of Mull, this Ledaig 2006 15 Years does the sweet and peat marriage very well.
8.8

While tempting to go an a tangent about the climate crisis and how it might impact (or already impacts) the whisky industry, I’ll gladly point you to the work of others. I don’t really feel like spiraling and going down that rabbit hole right now.

Instead, let’s take a look at some of these bottlings for the Whisky Show 2022. Or maybe some of the whiskies that weren’t bottled. Whisky is an inherently unsustainable product. A luxury item that anyone could do without.

But as I doubt we’re going to bring the entire whisky industry to a halt, there are some distilleries that prioritize sustainability. Think of Ardnamurchan or Nc’nean in Scotland. Or Cardrona in New Zealand. And Teerenpeli in Finland.

And it’s not just these newer distilleries that have made progress. Knockdhu and their distillery manager Gordon Bruce have put in a lot of time and effort to improve. And Glen Garioch just underwent an impressive make-over.

It would’ve been nice if some of these pioneers were highlighted in the bottlings for the Whisky Show 2022. But I suppose we can’t have it all. And creating awareness for the climate (and energy) crisis we’re in is a good thing regardless.