I’ve written about Waterford often. So much so, that I’m not entirely sure how to preface my tasting notes of the Waterford Sheestown 1.1, part of the distillery’s Single Farm Origin series. Although, come to think of it, since my last review of theirs, they’ve had some pretty big news.

With the publication of a report called ‘The Impact of Terroir on the Flavour of Single Malt Whisk(e)y New Make Spirit‘, the distillery now claims the “terroir debate is settled.” And I’d be inclined to agree with them, simply out of sheer logic but also because of my own sensory experiences with their new make and whisky. But I haven’t had time to read the entire report yet. It’s academic, which means it isn’t written for consumption by the general public, but rather something for peers to review. As I don’t have an academic background, some of the sections are almost foreign to me. And even if I had finished it, my understanding of chemistry is not at such a level that I could verify their findings.

However, the long and short of it is this: analysis found that both environment AND season had a greater impact on the aromatic sensory perception of new make spirit than barley variety alone. To my mind, that’s huge. To skeptics it might still prove nothing, because the the influence of oak isn’t researched. Yet. Because the next stage – which will be published in 2022 – further explores the same role of terroir in whisky, this time using analysis based on Waterford Distillery’s own commercial spirit and matured whisky.

I don’t find it hard to predict the conclusion the next stage. After all, if the new make is influenced by environment and season, mature whisky will have to be too. The flavour compounds already present in the new make spirit interact with oak and air. So almost by default terroir is at least partly responsible for the characteristics of whisky, even after X years of ageing. That’s just an hypothesis though and I might overlook some very important variables, but I’m almost convinced the scientists involved in this research project will provide proof.

So, what about the terroir of the Waterford Sheestown 1.1? Grown in County Kilkenny, the soil is defined by a geology of limestone and sandstone. The barley was harvested in the summer of 2015, fermented for 131.5 hours and distilled a year later. It matured for close to 4 years in a mixture of first-fill U.S. (35%), Virgin U.S. (21%), Premium French (25%) and Vin Doux Naturel (19%) oak.

Nose: Plenty of barley husks, a whiff of porridge, and some light notes of marzipan and vanilla. Somewhat yeasty with hints of moss, but also a whisper of orange marmalade and barley sugar.
Taste: Quite oily with a nice mixture of floral notes, strawberries and a good amount of bran. Also notes of apricots, pears and pickled oranges, accompanied by strong breakfast tea and peppercorns.
Finish: Lingering floral notes with a touch of limoncello and maybe even some chocolate.

Lots to like and explore here. It’s undeniably young whisky but the complexity is already there. 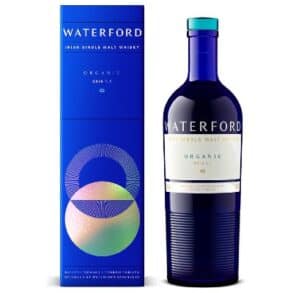