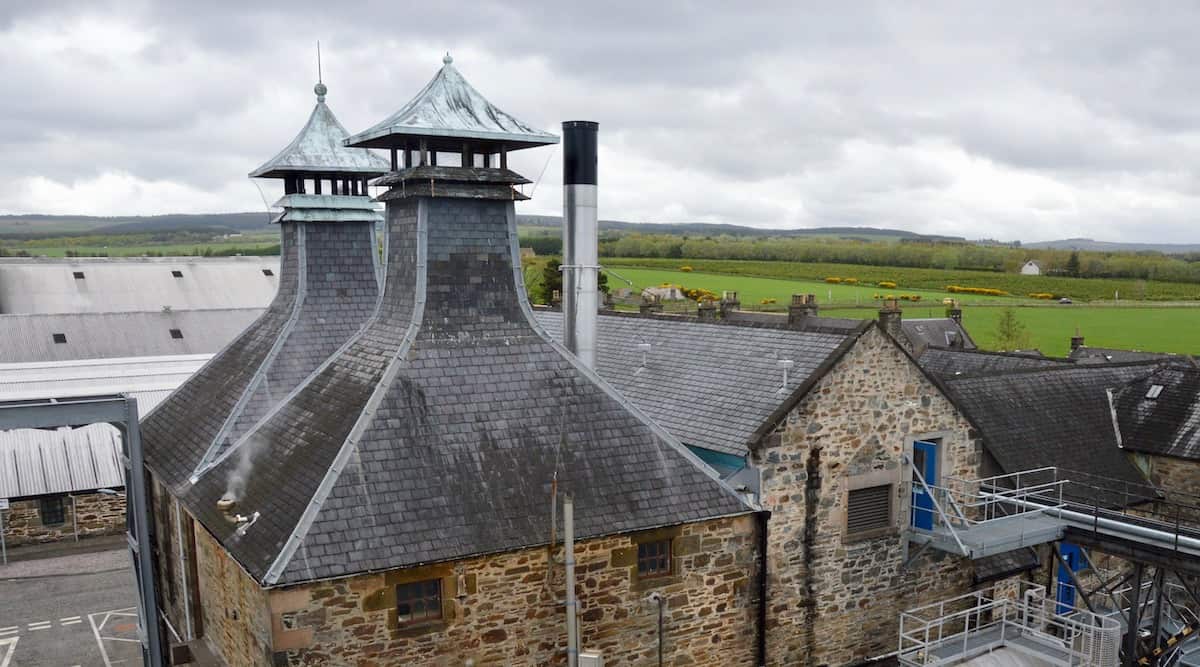 For three years in a row a whisky buddy and certified Inchgower nut, Sebastiaan, hosted a tasting themed around this coastal distillery. During those tastings, I’ve grown quite fond of Inchgower and its unusual whisky. When the opportunity presented itself during Spirit of Speyside 2019 to actually visit the distillery – which usually isn’t open to the public – I just couldn’t not jump on it. If only to find out more about their quest for a nutty new make.

Organised by The Whisky Shop Dufftown, a small coach brought 11 whisky enthusiasts, including myself, from Dufftown to Buckie, the small coastal town where Inchgower was founded in 1871. Distillery Manager David Clark was to take us around, and he immediately presented himself as a very affable and passionate person, taking pride in showing the place to visitors, but also showing an interest in us.

Upon arrival we first gathered in a sort of meeting room, outfitted with memorabilia. Quaint would be the right adjective to use here. David introduced himself, but then asked each and very one of his visitors to tell a little about themselves as well. It immediately made for an informal start of the tour, and while I’ve never quite kicked off a tour like this, I thought it was a great touch.

The Inchgower site is pretty impressive in its sheer size. That’s not surprising as at one point in time there were stables, workshops and floor maltings, and there was also room reserved for smiths, excisemen, and coopers. Not anymore though, since (logically) a lot of the operation is now centralised because the distillery is owned by industry giant Diageo. 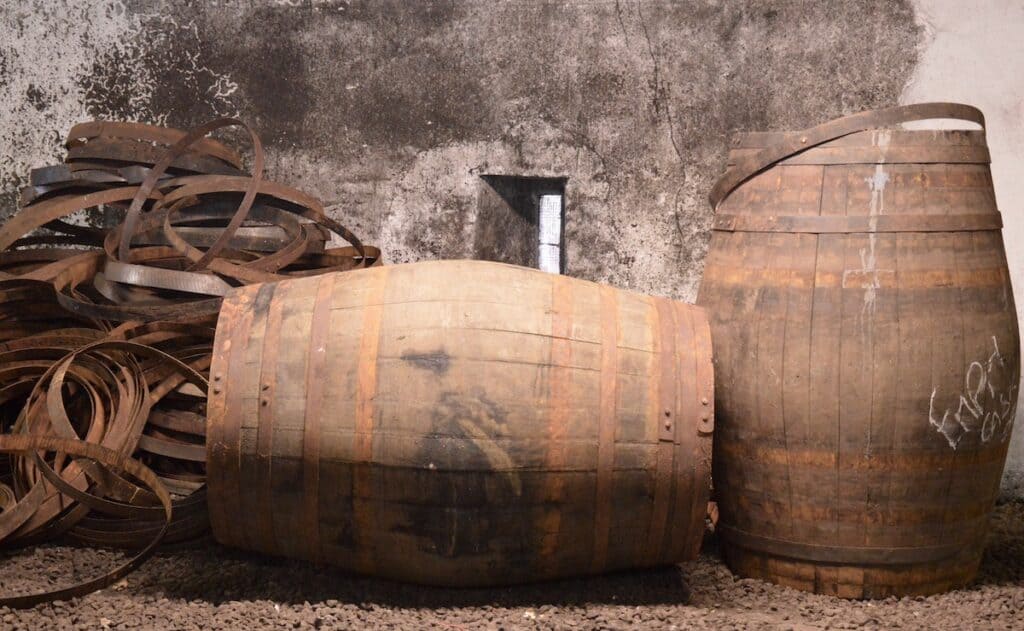 With just seven people working at Inchgower (and almost never together at the same time), us lot probably tripled or quadrupled the population once we entered the premises. Inchgower currently operates 24/5 – 24 hours a day for 5 days a week. As Inchgower is fully automated, a lone man shift is possible, and often even necessary, during holidays for example.

Most of the distillery’s output ends up in Bell’s, a well-known blended whisky. Some of it is used also for Copper Dog, a blended Speyside malt, while official single malt bottlings are very rare. There’s a Flora & Fauna edition, there have been a few Rare Malts releases, and recently a 27-year old Inchgower was included in the 2018 Diageo Special Releases. But that’s about it.

To start, David takes us to a trio of malt bins, which are erected at the rear of the distillery, looking out over the Moray Firth coast. Inchgower takes in roughly 109 tonnes of malted barley per week, either Concerto or Laureate, which is then stored first in the malt bins, of course. However, the bins served another purpose for us, as we climbed the stairs of the metal structure, which gave us great views of the distillery and the surrounding landscape (see the picture at the top of the post). 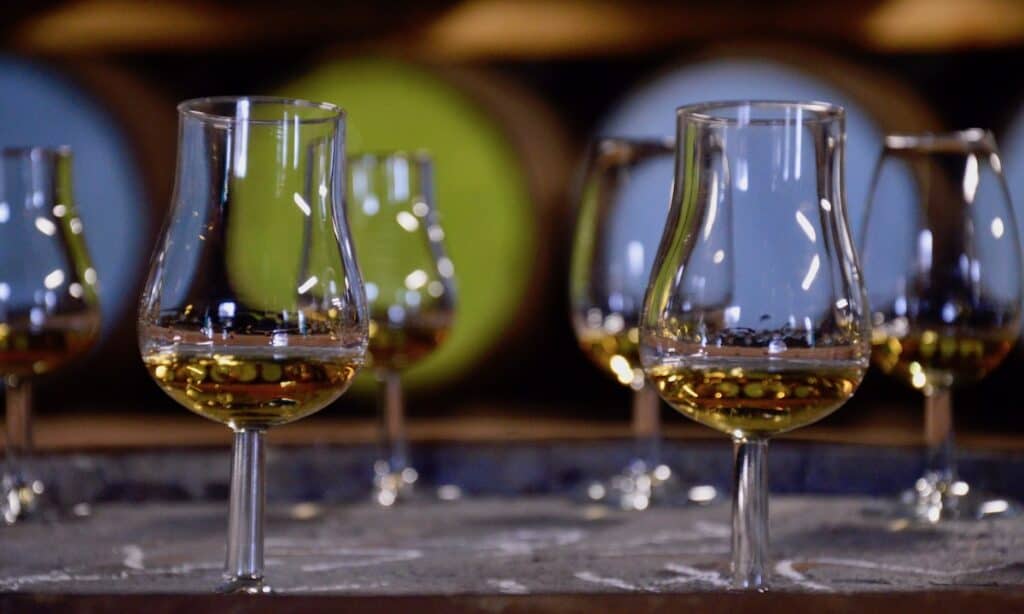 Further inland of the distillery, three miles to be exact, is where you’ll find Inchgower’s water source. Not that we could spot it from our birds eye view, but it was nice to overlook the green hills in between the distillery and Keith. The water source is called Minduff Burn, and lies 180 metres above sea level. Since Inchgower is practically at sea level, David explains, the water arrives with quite some force at the distillery.

After passing by the Boby Mill (very old, as they all are), we encountered the mash tun. This is where David first mentions the type of spirit character that they’re after at Inchgower. In a word: nutty. They do 13 mashes a week at 8.36 tonnes of barley. To achieve their signature flavour profile, a cloudy wort is preferred.

The fermentation is where things really start to get interesting. Not because of a special kind of yeast or anything of the sorts – creamed yeast is their weapon of choice. However, what does set Inchgower apart, is the extremely short fermentation of 40 hours. In a sense, the yeast is still active once the wash reaches the pot stills. It’s the shortest fermentation time in the industry, and helps achieve the nutty character.

Not all fermentations at Inchgower take only 40 hours. Some actually go up to 90 hours, depending on if the weekend gets in the way of emptying the washback. The longer fermented wash has more of a grassy quality to it, David tells us. 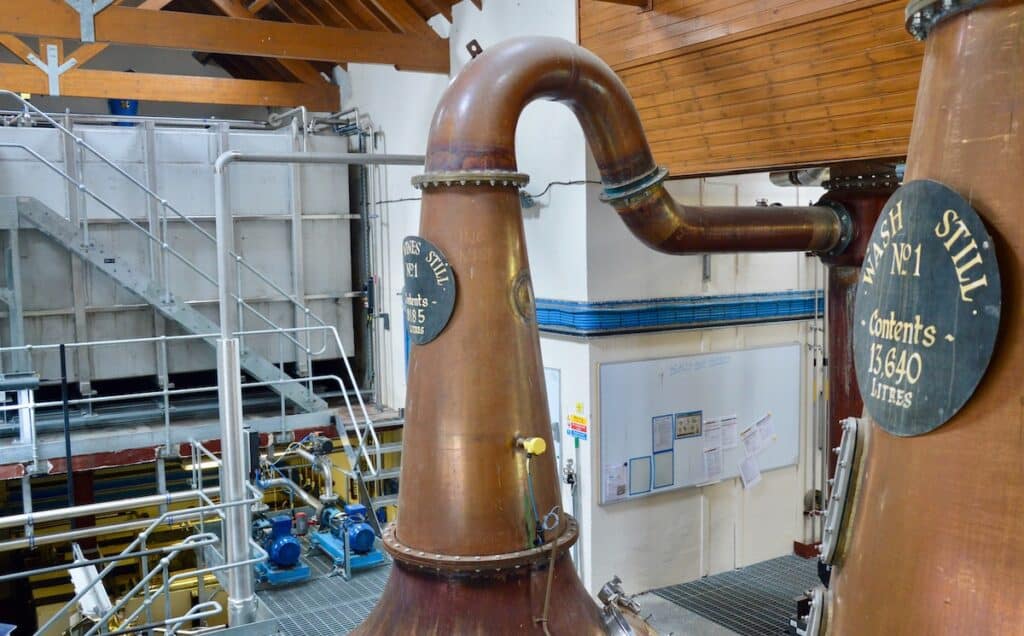 There are four copper pot stills, and they are gloriously unpolished. In a further effort to ensure the Inchgower nuttiness, the wash still is heated up rather quickly. That way, it’s not just vapours that make it into the lyne arm, but also some solids. Reflux is discouraged, as the lyne arms on both the wash and the spirit stills are designed in such a way that the vapours go up and over, and not back in the pot stills.

It’s these kind of interesting quirks that make it worthwhile to keep on visiting new distilleries. For some, distilleries might blend into one another after the tenth or so different visit, but finding new interesting tidbits is what keeps it fun, even if you’re dozens deep. If you’re a whisky geek, you understand what I’m talking about. If not, good on you. You’d have to be a bit nutty (pun intended) to willingly go to that many distilleries anyway.

Our visit ended in the warehouse, which is where all great distillery visits should. Tasting in a tasting room is nice and all, but tasting in a warehouse is much more special – even if the conditions are far from perfect. It was a fitting ending to what has turned out to be one of my favourite distillery visits of the Spirit of Speyside Festival 2019.