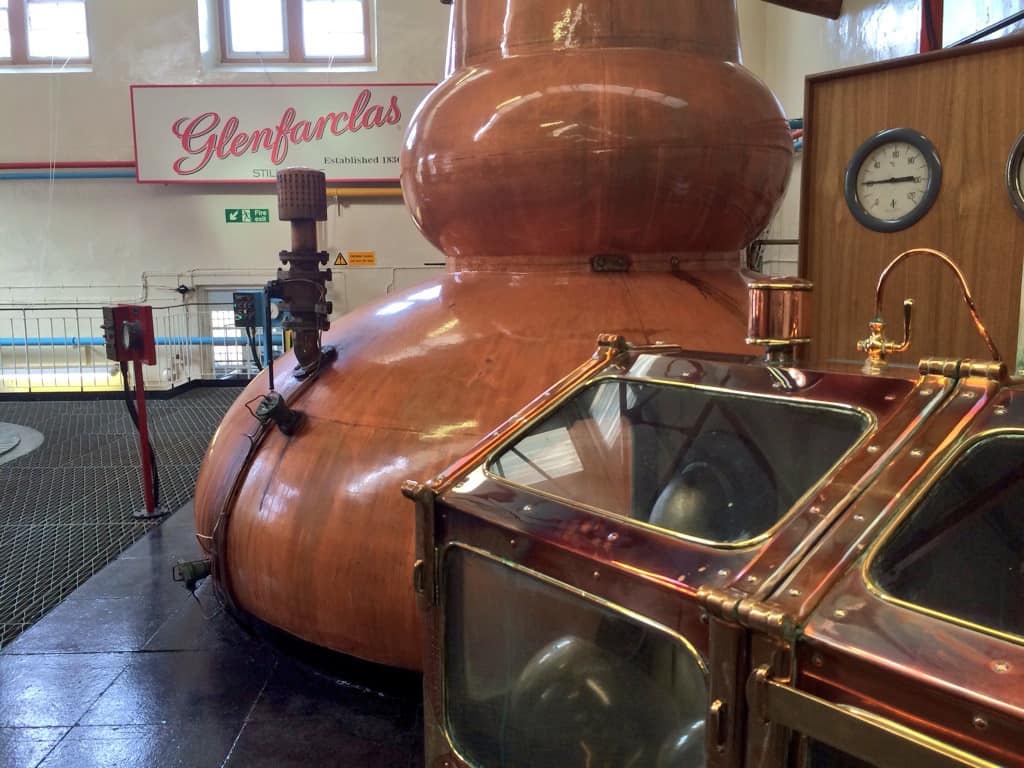 Oh Glenfarclas! The romance of whisky making is still very much alive in this small part of Speyside, just a couple of miles from the town of Aberlour. It is one of the few family run distilleries still out there. Current chairman John Grant is the fifth generation of the family to own and manage the Glenfarclas distillery. And the sixth generation, George Grant, is being groomed to fill his father’s place in the future.

Arriving on site, Glenfarclas immediately breathes a very different atmosphere compared to most Speyside distilleries. It’s not nicely tucked away in between oak trees like or in a little village. No, Glenfarclas is situated in a very open and fairly rough terrain, with the impressive mountain Ben Rinnes as the backdrop. The spring that doubles as their water source is also somewhere up there.

Normally when you visit Glenfarclas at the end of February, there’s a lot of snow. That certainly wasn’t the case when me and my girlfriend arrived. The winter of 2013/2014 has been a very mild one so far, with temperatures rarely dropping into freezing territory. Hence the lack of white mountain tops. That somewhat worries the good people at Glenfarclas, because what is now snow, will be water in the summer. They aren’t panicking yet, but if Speyside follows up that mellow winter with a dry summer, than some distilleries might be looking at a water shortage.

We had booked a standard tour at 10.30 AM and arrived a bit early. One of the best things about visiting a distillery in the off-season is that there’ss a good chance you’ll get a private tour. Since nobody else arrived before our starting time, it was just the two of us with marketing executive Ian McWilliam. Joy! Ian lives and breathes Glenfarclas. He’s been working there for close to 25 years and has held every job imaginable. He actually lives just fifty meters from the visitor centre.

The first stop on the tour was a monster of a malt mill, definitely the biggest one I’ve seen so far and according to Ian also one of the biggest in Speyside. But besides that interesting tidbit a malt mill is mostly just a noisy machine. After taking a peek inside the mash tun, the washbacks proved to be interesting mainly because of the fact that one them was being filled right at that moment. That meant that I could have a wee taste of the liquid that comes out of the mash tun. Still looks like water, but tastes like a combination of sugar and barley.

The still room is always one of the more impressive parts of a distillery tour, and Glenfarclas was no exception. There are six stills in total and they are the biggest in all of Speyside. There is a control panel but everything is still operated by hand. No computerization to see here, move along people! Not only do the still operators do everything by hand, they also write everything down (see the picture above). It’s mostly mumbo jumbo to me, I’m not much of a numbers guy. But maybe there are readers who love this kind of stuff. So have at it and enjoy yourself.

One of the best things about Glenfarclas is their independent nature. Everybody who works at Glenfarclas loves whisky. From the people working in the warehouse to the chairman of the board. And because they are family owned, they don’t have to follow certain trends like ‘No Age Statement’-whiskies. That’s how Ian explained it to me. He was very politically correct in his answers, but you could see that he was not a fan of the NAS-trend. That’s why he proudly told me that they recently added an age statement to Glenfarclas 105. If you have a (fairly) new bottle and you look at the back label, it should say that it is at least ten years old. A big win for Glenfarclas if you ask me, because that means they haven’t a single NAS-expression.

Sadly, the standard tour did not include a visit to the warehouse. It is the only negative, but a big one. Entering a warehouse is the highlight of any distillery tour. Besides that Ian showed us a wonderful time at Glenfarclas. It’s one of the must see distilleries of Speyside and most importantly, they make fantastic whisky!

Previous
A Forty-something Tamdhu, My Oldest Whisky So Far

Next
Smoky Sweetness From The Eighties