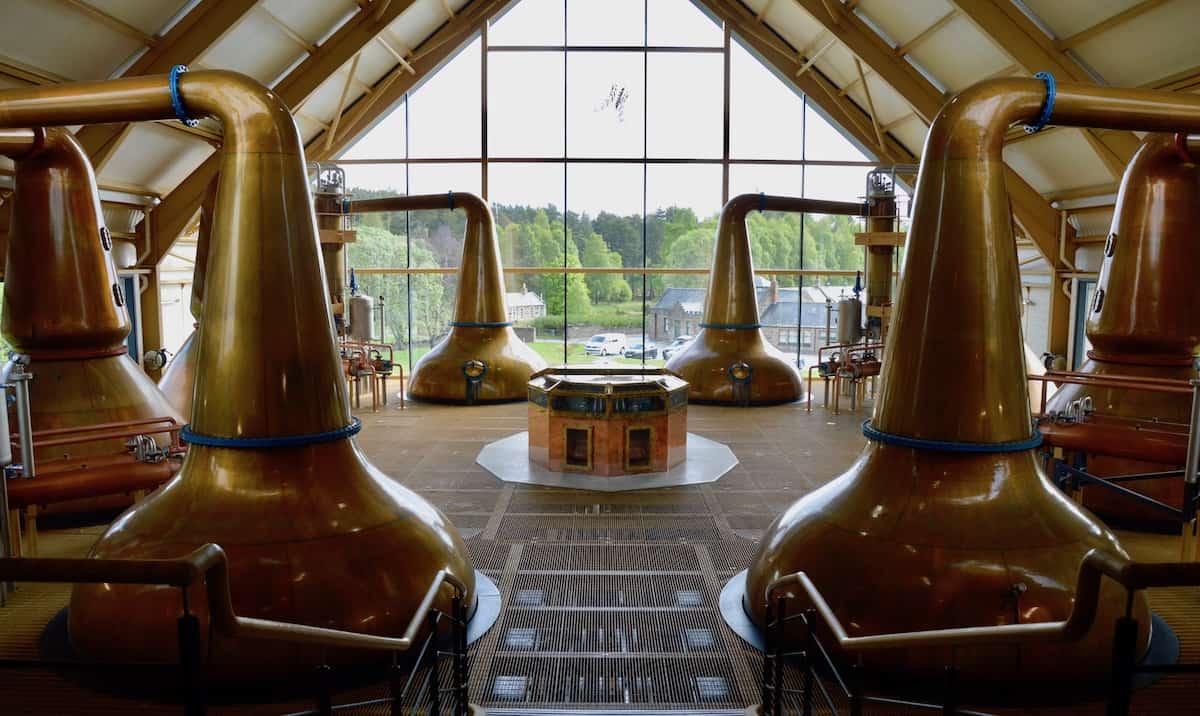 Even though it is one of the lesser known closed distilleries, you might’ve heard of Imperial. Signatory Vintage have released some very nice and fruity 1995 vintages. Dalmunach however is still very much an unknown. There is a parallel between the two: Dalmunach sits on the exact site of the now demolished Imperial.

Dalmunach only opened in 2015. It is one hell of a sight to see, and certainly one of the most technology advanced distilleries in Scotland. Although Kelsey Bruce, assistant manager, downplayed that part a bit when she showed me and about a dozen of other whisky enthusiasts (including the incomparable Noortje) around during the Spirit of Speyside Whisky Festival 2019. She was quick to say that Dalmunach was modern indeed, but had already been surpassed in the Chivas portfolio by Glenlivet.

Nonetheless, it is extremely new, bright, shiny, [insert 20 or so other adjectives here]. Even the most sceptic of whisky enthusiasts, the type that rather have their whisky made in an old rusty still by the ghost of an 80-year-old Highlander, will come away from Dalmunach impressed. The pictures do give a good impression, but it’s not exactly the same as being inside that massively enormous still house. 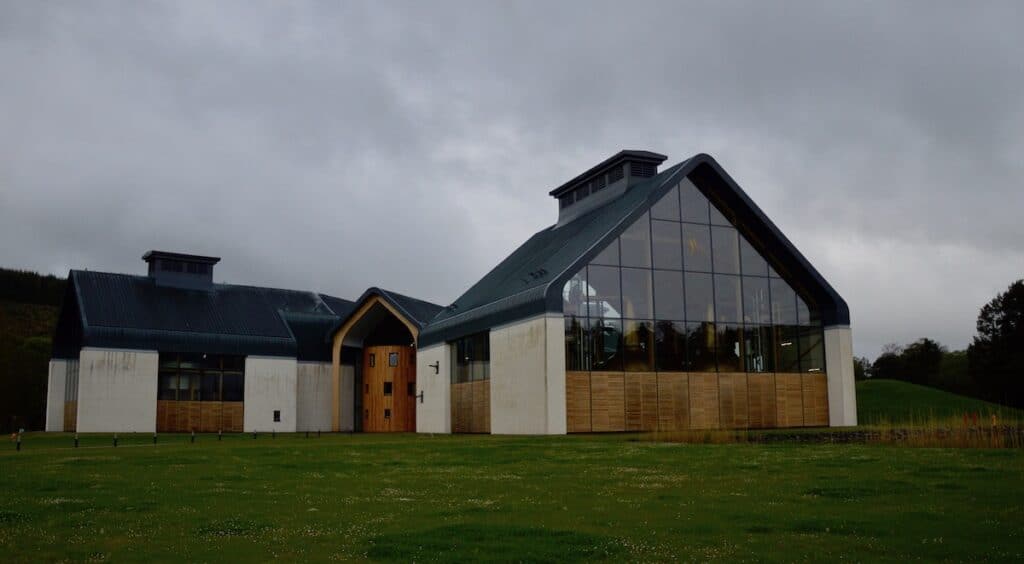 Anyway, I’m getting ahead om myself. First off, into the mill room we went. And there it was: another fucking Porteus mill. Even in this multi-million pound of a behemoth, they have a Porteus mill. These things just won’t die. Fair is fair though, the Porteus mill is only there as a back-up, and isn’t even connected. For every day milling Dalmunach uses a modern Buhler milling machine to get through the 20 loads of 28 tonnes a week.

Everything is big at Dalmunach, and the stainless steel Briggs mash tun is no exception. With a diameter of 9,5 meters, only Macallan’s new mash tun is bigger. There’s a 4 hour mash cycle, and each time 13 tonnes of grist is combined with 60,000 liters of water. They could do one wash in as little as 3,5 hours, Kelsey explained, before adding that Glenlivet does it quicker than Dalmunach ever could, but just by 8 minutes.

The rows of stainless steel washbacks is just as splendid to look at, even though it’ll never rival the sort of artisinal look that wooden washbacks provide. There’s 16 of them in total, each capable of holding 60,000 liters of wash, and most importantly, they are outfitted with cooling jackets. That means the temperature can be controlled, giving Kelsey and her colleagues all kinds of interesting possibilities. 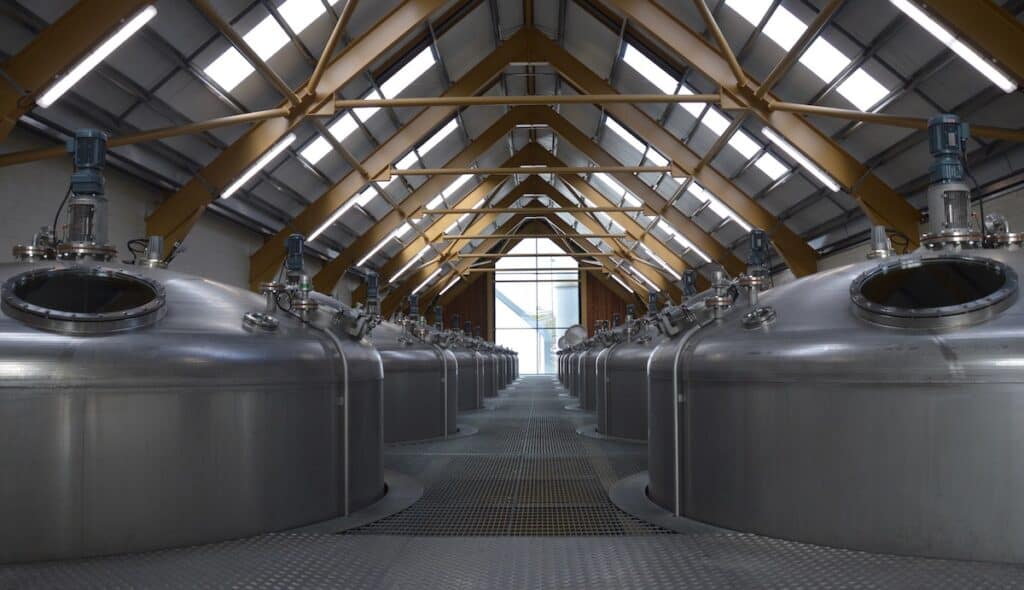 One thing they’ve experimented with, is sort of kickstarting the fermentation, as to shorten the lag phase in fermentation, referring to the first 6 hours when the yeast still has some waking up to do. Instead of starting fermentation at the usual 17 or so degrees, Dalmunach sets off this stage of production at 25 degrees. It makes for a very fiery fermentation, Kelsey told us, putting a lot of pressure on the washbacks.

In any distillery, the still house is usually the most awe-inspiring place, and Dalmunach is no exception. It is like no other you’ll have seen. The circular spirit safe(s) sits in the middle of the room, surrounded by eight immense copper pot stills. The wash stills can be charged with roughly 30,000 liters of wash, in line with some of the biggest stills in the Scotch whisky industry, like Glenkinchie’s.

Because of the thermal vapour recompression technique that Dalmunach uses, the wash stills pretty much run themselves 45 percent of the time. Kelsey explained it was like catching steam from a kettle, only to reuse it, which is about as uncomplicated as I can make this complicated process sound. One downside of the technique – it puts a lot of pressure on the condensers, which have to be replaced every five years.

When Dalmunach started off, the goal was to make a Longmorn style of fruity new make, Kelsey said. But they’ve since been allowed to experiment, especially during these first few years of production. There have been experiments with yeast, the temperature of the wash backs, the length of the ferment, and the flow rate of the distillation. It sounds to me like it must be one of the most fascinating Chivas distilleries to work at. 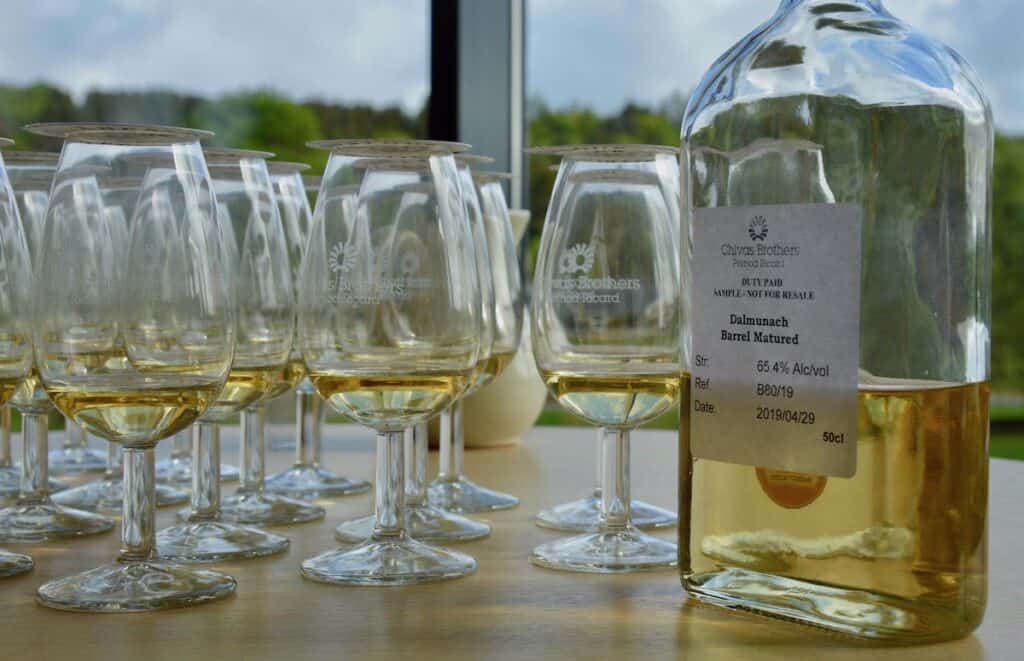 The experimenting will likely become less and less though, now that they are very happy with the new make that is coming off the stills. When we got to taste a 4-year old Dalmunach at the end of the tour, in the middle of the majestic still house, it confirmed that Dalmunach might one day become a welcome addition to the world of single malt.

High in strength, but after adding a touch of water, it became fruity and fragrant and very enticing. Dalmunach probably won’t make it to market as a standalone single malt brand soon, and will always largely keep producing for blends, but it is certainly something to look forward to.