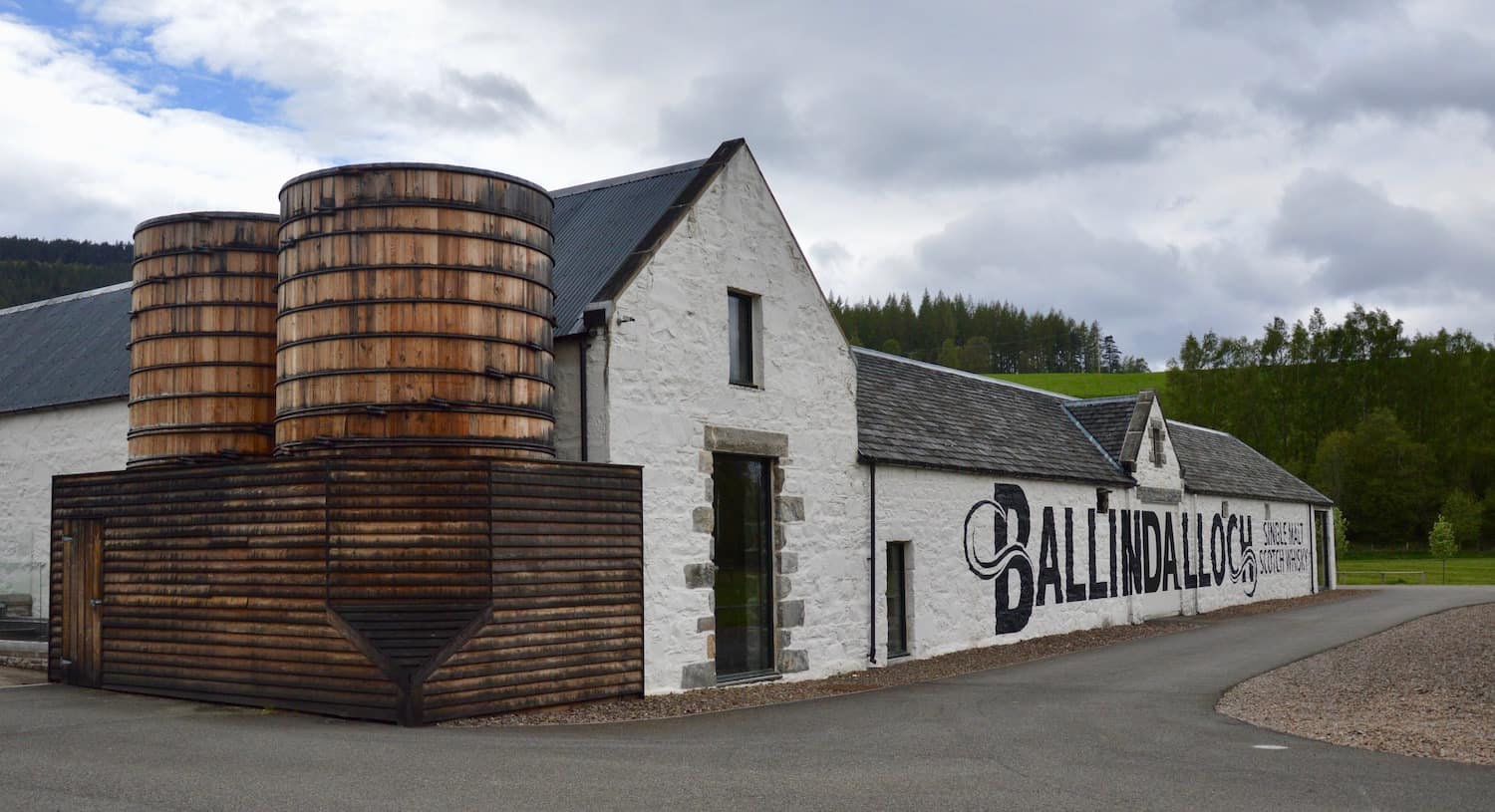 During Spirit of Speyside 2019, my goal was to visit distilleries that are usually closed to the public. Ballindalloch Distillery was an exception, and while I could have visited during any of my other semi frequent Scotland trips, I do not regret doing so during the festival. Not one bit.

I’ve always said that if you do just one tour in Speyside, it should be at Balvenie. There you can witness each part of the whisky making process (including malting and coopering) during a relaxed three hour tour. However, after touring Ballindalloch, I may have to reconsider that.

Ballindalloch Distillery is situated in the heart of the Ballindalloch Estate, owned by the Macpherson-Grant family. Known for its castle (built in 1546), golf course and herd of Aberdeen Angus cattle, the distillery is part of a decades long diversification process of the estate, initiated a few generations ago. Another such example is the 64 Mega Watt wind farm that became operational in 2006.

The distillery is built inside a former farm building, which had long been an eyesore to the family, located just off the A95. Richard Forsyth — of world-renowned Rothes coppersmiths Forsyths — may have planted the seed for the distillery, when he suggested the family might transform the derelict building after a round of golf on the Ballindalloch golf course.

It was Guy Macpherson-Grant, 23rd generation of his family, who embraced that challenge in 2011, which led to the first distillation of Ballindalloch spirit in 2014. From the very outset, Ballindalloch Distillery was going to be traditional, with a very (and I mean VERY) hands-on approach. Also worth mentioning, Ballindalloch is a single estate distillery. The barley is grown on the estate itself. 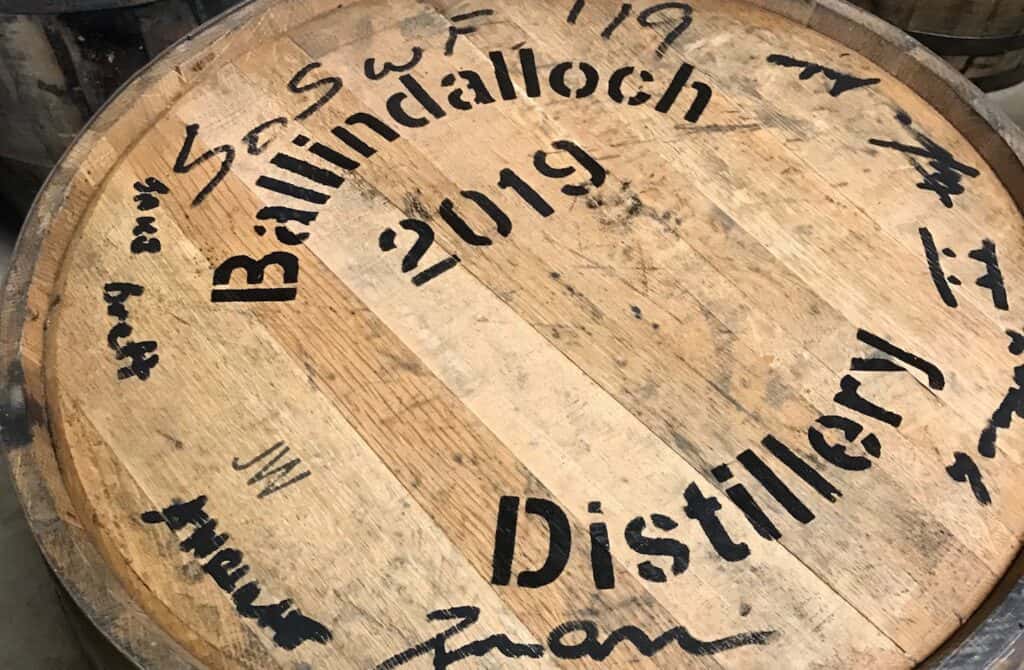 Ballindalloch has already won the Whisky Magazine Icons of Whisky ‘Craft Producer of the Year’ award twice, which is remarkable considering that there’s no whisky released yet. As of now, there are plans for an inaugural release once the whisky has matured for at least 8 years. That is at least three to four years away.

A tour of Ballindalloch takes about three hours, and there are never more than eight total visitors participating during a single tour. That’s by choice, but also by necessity, as there simply isn’t that much room in the distillery itself for larger groups. But how do you entertain visitors for three hours on such a small site?

Distillery host Brian Robinson welcomed us in a cozy and very comfortable reception room for tea and biscuits. While he explained to us the history and philosophy (patience and tradition), we probably spend an hour just talking — about Ballindalloch, but also whisky in general. It was easily the most casual start to a distillery tour I’ve ever experienced. 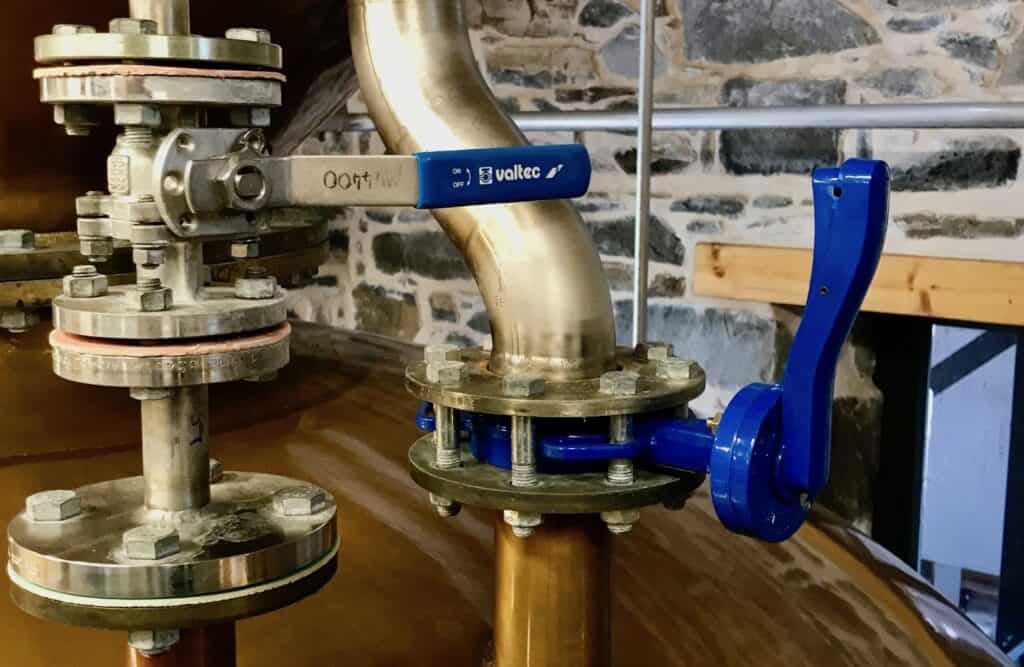 Ballindalloch is a small distillery, that much is clear from the moment we entered the production area. Roughly 100.000 liters is produced each year, which is almost negligible compared to some, or maybe even all of the other Speyside distilleries. Only about a tonne of barley is needed per day. Concerto is what they’ve been using so far, but this year Laureate is going in.

I already mentioned the hands-on approach at Ballindalloch. You really only get a proper idea of the scope of this once you’re inside. The whole place is riddled with handles and valves. There’s 122 of the blue quarter turn butterfly valves such as pictured above. And there’s a total of 272 manually operated valves at Ballindalloch. Computers are banished here. Brian did not lie when he said the distillery was as manual as they come. 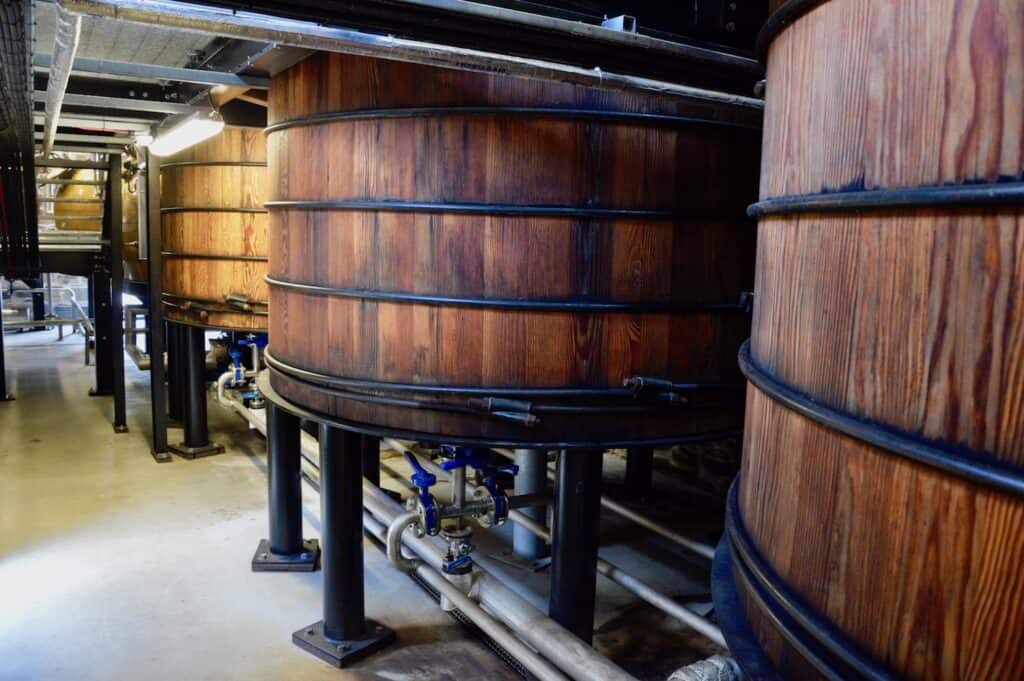 As Brian explained it, the people now working at Ballindalloch, came to the distillery because they wanted to be more involved in the whisky making process, instead of sitting behind a computer screen all day, or operating a distillery from an app on an iPad (yes, that’s a thing now). It makes total sense, although it wouldn’t surprise me if after a few years of chasing valves at Ballindalloch, that iPad might start to look a little more enticing?

The distillery has 4 washbacks, each with a capacity of 10,000 liters. Brian mentioned that these were originally destined for a distillery in Sweden, but the order was cancelled. That’s also why at Ballindalloch the washbacks are only ever half full, because the original plan was for 5,000 liter washbacks to be installed. 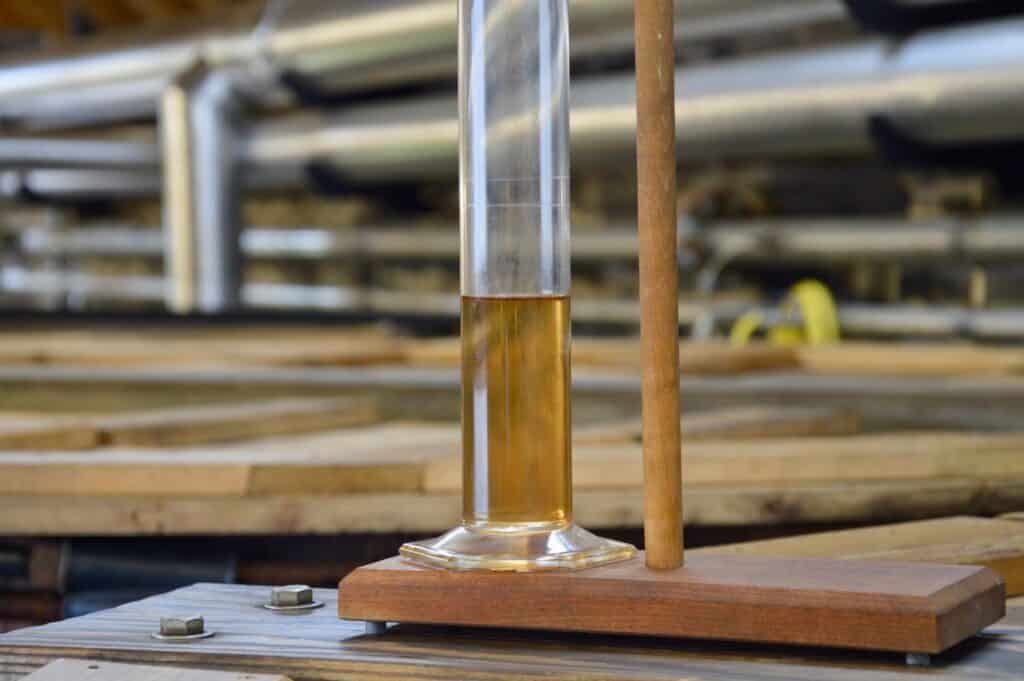 Because the Macpherson-Grant family likes their whisky to have a fruity character, that’s what they’re trying to achieve at Ballindalloch. That means working hard to get a clear wort, which is (among others) the result of a very slow mash and long fermentation. There’s five fermentations a week: one lasting 92 hours, the others a long as 140 hours. Anchor dried yeast is used, as it is believed to further encourage fruitiness.

There’s two stills: a 5,000 liter wash still that runs for about 6 hours, and a 3,600 liter spirit still that runs for roughly 5,5 hours. The latter is only ever charged with 3,100 liters of wash. The foreshots run for about 30 minutes, and the first cut is taken at 73%. The middle cut runs for about 3 hours, before the second cut, which is taken at about 62%. The result is roughly 620 liters of spirit each day running through the old spirit still from Cragganmore distillery, with which the Macpherson-Grant family have a special relationship. 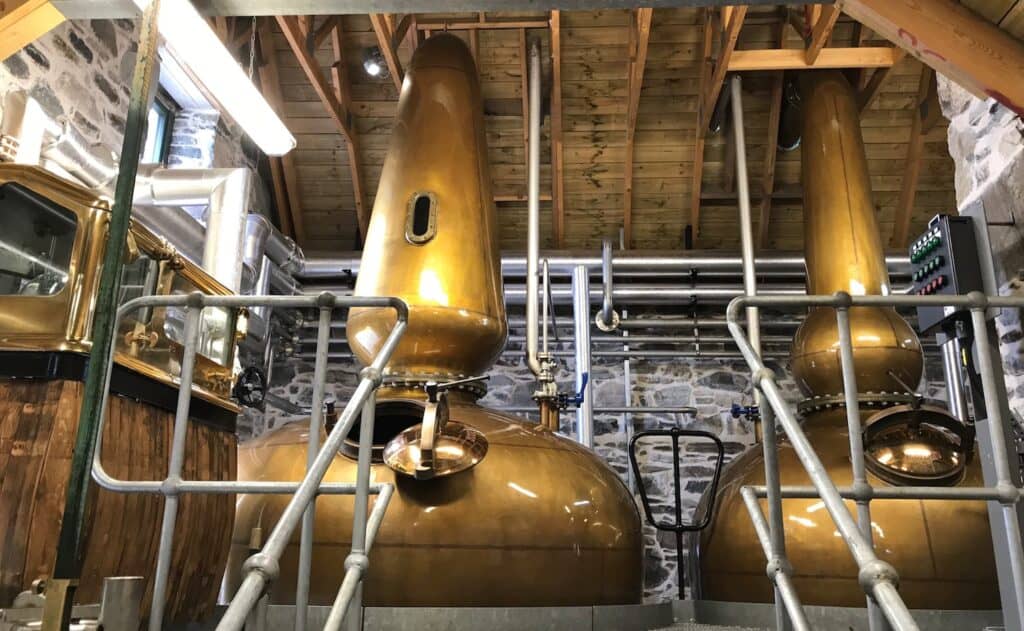 It’s all about maximising copper contact, which again helps with the fruitiness. Besides running the stills at a very slow pace, the spirit still is charged at the end of the work day, and set at a temperature of 72º Celsius. Now this is not enough to really get the distillation going, but it will make the low wines and the spirit still sweat, which results in another 15 hours of copper contact before the heat is turned up properly the next morning.

Brian then took us inside the dunnage style warehouse, where a small part of the distillery’s stocks are maturing. All of the casks from the private cask scheme are held there. They only fill 25 casks a year for private individuals, and currently there’s a wait list of 2 years. Since starting the distillery in 2014, they’ve filled just over 3,000 casks. Most of those are maturing in a warehouse elsewhere on the estate. 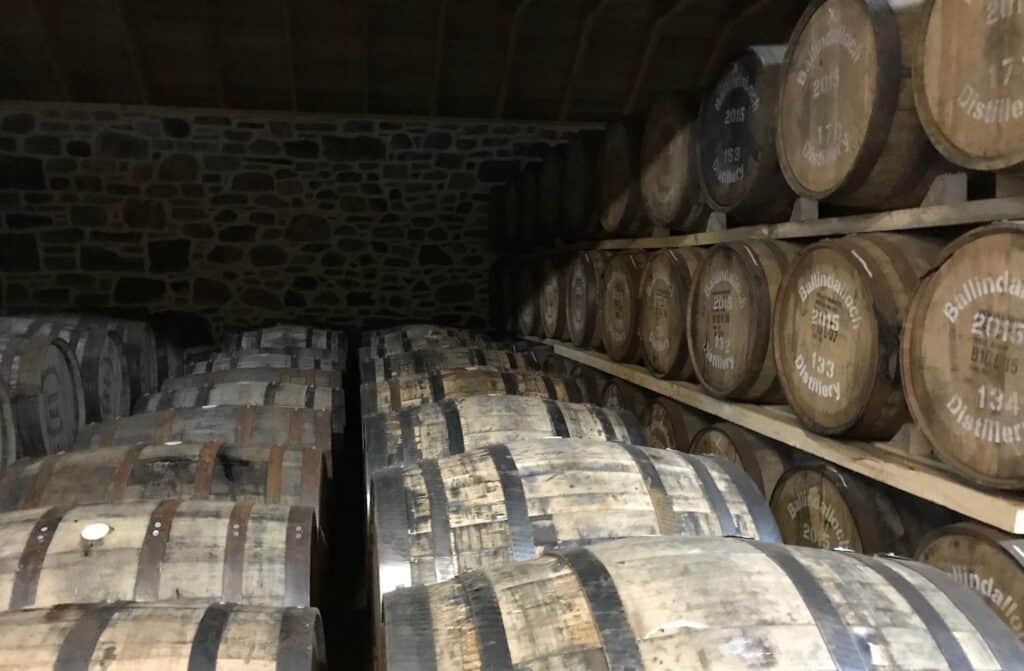 That off-site warehouse also houses a number of casks from Cragganmore distillery. It was Sir George Macpherson-Grant who leased land to distiller John Smith to build his Cragganmore distillery in 1869. Decades further down the line, an agreement was made between the family and the distillery, allowing the family to buy one cask of Cragganmore each year. Seeing as Ballindalloch hasn’t released any whisky yet, these casks now come in very handy. We concluded the tour with a tasting of three Cragganmore, from 1984, 1985 and 1986, each more impressive than the last.

The tasting room was also the end of our tour. There’s was no shop, not even some merchandise for sale. It’s all about whisky here, and despite the modest size of the distillery, Brian had no problem at all entertaining our group for well over three hours. It’s easy to see why Ballindalloch has won two Icons of Whisky Awards. And while they don’t have a cooperage or malting floor like Balvenie does, Ballindalloch is now probably my first choice when someone asks me where to go in Speyside.

The people at Ballindalloch are confidently working on their whisky with great understanding of their craft. I can’t wait until the whisky is released. Also, I will have to come back at one point for The Art of Making Whisky experience, which is a full day of working alongside the team. That’s definitely on the bucket list now.