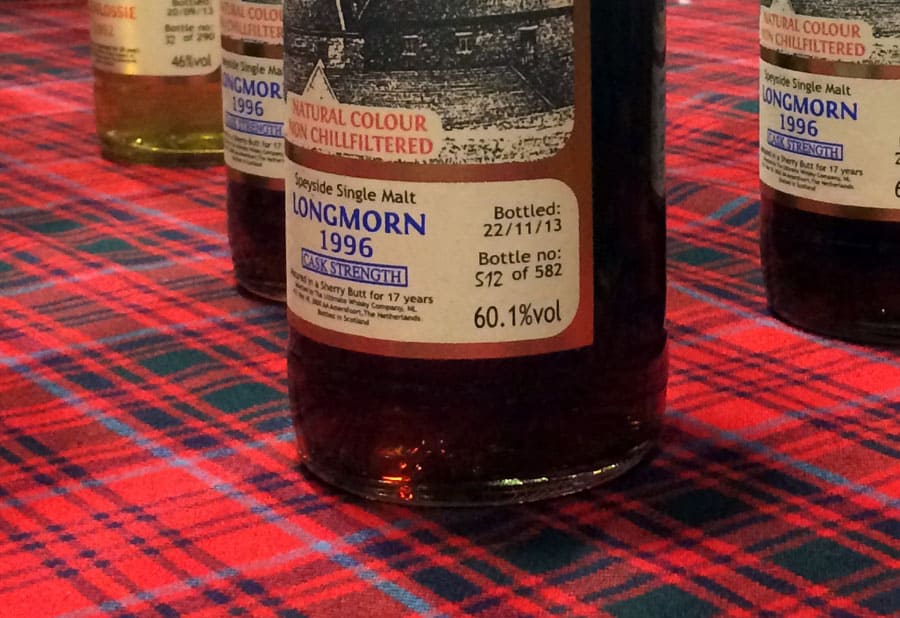 Indie-bottlings of Longmorn are usually very well received. Dutch bottler Van Wees recently discovered this when they churned out cask after cask of Longmorn, each selling faster than the other. They have now bottled seven different Longmorn-casks in little over a year, and I have tasted two of them. They all are fantastic ‘bang for your buck’-whiskies since they are/were avaliable for anywhere between 60 to 70 euros.

There is little chance that Van Wees will release more 1996 Longmorn’s, as sales manager Jan Beek told during a recent tasting. They consider themselves lucky enough for securing first five, and than another two of these wonderful Longmorn-filled sherry butts. So if you see any of the seven Longmorn-bottlings in The Ultimate-range, don’t hesitate because they are great value for money. And if you can’t find one, just try to enjoy the tasting notes below. Nose: Very sweey from the get-go, dark chocolate, amazing dried red fruit, forest fruits, berries and some wet barley. It’s a lovely and soft nose, no sharpness at all, which is surprising because of the high abv.
Taste: The high abv is more noticable now, but in a good, warm kind of way. Again plenty of chocolate and also sweet strawberry. Some spicy notes here.
Finish: A long sherry finish that never ends. A lot of spice and some wood.

Nose: At first some coffee notes, but after some warming up also some leather and chocolate. Also a great cranberry aroma to go with some mocha and raisins.
Taste: I wrote down ‘explosion’ in my notes. And it really was an explosion of taste. It’s a tiny bit salty, some orange and raspberry next to more spicy notes like cinnamon. A bit too dry.
Finish: Long finish. Mandarine! More fruity that the taste and a hint of smoke.

Conclusion
Writing these notes down brings back wonderful memories. Both casks are great and I would’ve been happy with either one. But cask 72323 is just more well-rounded and mature and that is why I have it rated as the better of the two.