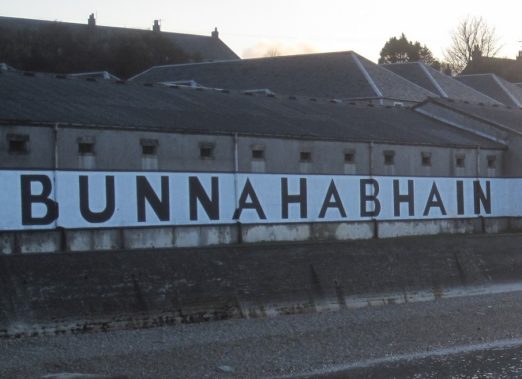 Whisky from Bunnahabhain distillery is right up my ally. I have yet to taste one I don’t like, and the ones I have tasted are all good, and some even very good to excellent. Later this year I’ll be making my first trip to Islay, so I’ll have a chance to visit the distillery. But for now I’ll have to do with tasting the stuff, which is really what it’s all about.  And considering my love for Bunnahabhain, it’s high time I post my first tasting notes of their whisky. Here we go! Nose: The nose on this one is really good! Having matured in a first fill sherry butt for eleven years doesn’t hurt. It’s sweet but not overpowering with notes of caramel, fudge, hay and coffee beans.
Taste: Still good but it doesn’t quite deliver on the promise of the nose. Plenty of sherry notes and red dried fruit, but a bit weak.
Finish: This gets better with time, the tiniest hint of smoke along with some more caramel and red fruit. Nose: The combination of whisky matured in bourbon and sherry casks really works for me. It has a great mineral lightness with a salty undertone and maybe even some clay. The sherry translates to sweet honey and caramel.
Taste: A lovely creamy mouthfeel, with again some seasalt already present in the nose. There is also orange and maybe even some citrus to go with coffee and toasted nuts.
Finish: Cherries first, but after that the herbs and spices take over. It finishes with a leathery wood taste.

Conclusion
The 18yo from Bunnahabhain is just a great whisky. It is perfectly balanced. I’d describe the eleven year old bottling by Van Wees as a sort of light-version of the 18 year old. It has it’s differences because it’s a single cask sherry butt. On the other hand it is obvious that these are both whiskies coming from this great Islay distillery.