Tomintoul offers a very gently priced range of single malt whiskies. Maybe that’s why its tagline is “The Gentle Dram”? Probably not, but strangely enough, because of the brand’s affordability this whisky tends to be overlooked by (for lack of a better word) connoisseurs. I too am guilty of this. An invitation to a recent virtual tasting has helped rectify that. Today I’ll take a closer look at the Tomintoul 10, 16 and 21 Years Old.

If my timing had been a little better I’d already have a distillery visit of Tomintoul under my belt. But during a brief business trip in 2018 I wasn’t able to pin down a date with their production manager, Graeme Bowie. After now having spent some virtual time with their Global Brand Ambassador and Master Blender Iain Forteath, I really hope to be able to drop by sometime soon (pandemic permitting of course). The village of Tomintoul is in a fantastic location as well. As for a bonus, The Whisky Castle in Tomintoul is a proper whisky specialist.

But I digress. Tomintoul Distillery is a product of the post-WWII boom in the 1950s and 1960s. It opened in 1965 and not much has changed since. According to Iain there are a few aspects of production that contribute to the fruity, light, fragrant new make with notes of apple and pear compote. For example, the semi-lauter mashtun allows tiny little fragments of barley husks to find their way into the fermentation stage. That’s also why the washbacks don’t need rotating arms to skim the froth, because apparently the little barley husks pop the bubbles.

Then there’s the tall stills. They’re not the tallest, or even second tallest. Iain hasn’t quite figured out were they rank among Scottish distilleries. But at 23 feet and 2 inches the stills are admittedly very tall. Compared to Glenmorangie (tallest stills in Scotland) the necks of the Tomintoul stills are much wider. In essence it allows for a lot of copper contact, contributing to a cleaner, lighter spirit.

Very accessible and the nose shows some depth. The palate is a bit thin and falls a little flat comparatively.

Nose: Sour apples and yeasty apple cider, but also some warm apple sauce and faint orange peel. Soft grassy notes and cream, but then a whiff of honey and even some tobacco. Finally just a touch of chalk.
Taste: Watery mouthfeel. Gentle citrus (lemon and tangerine) with some soft white pepper, with a touch of vanilla pods and whole grain biscuits.
Finish: Quite grassy and a whisper of fennel.

Offers a bit more excitement on the palate, while the nose is of a similar quality as the 10 Years.

Nose: Fairly refined with notes of aniseed, furniture polish and caramel-glazed apples, as well as a touch of licorice root and marzipan. Whisper of vanilla cream too. Finally a sprinkle of cinnamon and apfelstrudel.
Taste: Cherry syrup, toffee and brown sugar, as well as apple peel. Just some light touches of tobacco, black pepper and orange zest in the background. Gentle tannins. Somewhat thin again.
Finish: Lingering spices and slightly drying.

It has the depth and potential but probably suffers most from the low abv. It misses a certain richness, body and mouthfeel.

You might’ve wondered already, but the whisky is chill-filtered, caramel-coloured and bottled at just 40%. Not exactly the stuff of dreams for the average whisky nerd. Then again, there’s a whole world of casual whisky drinkers out there for who Tomintoul is absolutely perfect. And to be totally honest, even at such a disadvantage Tomintoul’s single malt is rather pleasant. But you can just taste there’s potential for much more, also evidenced by a single cask release I reviewed last year. I’m not convinced Tomintoul will soon shift their approach and start catering to geeks, but if they ever decide to, I’m confident they’ll succeed. 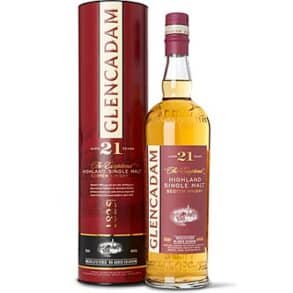