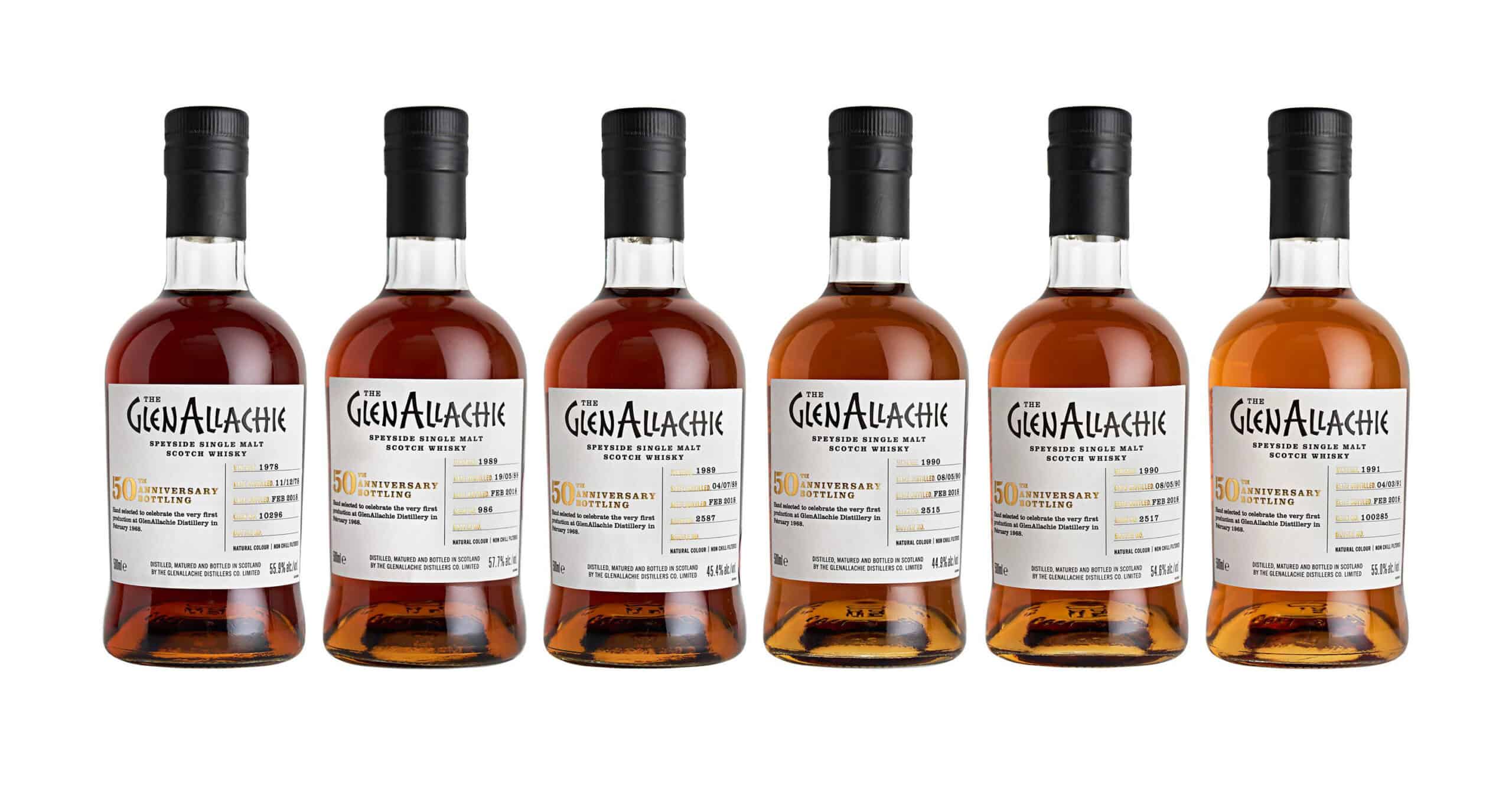 By now you’ve probably heard that something is a-brewing at the foot of the Benrinnes mountain in Speyside. Glenallachie distillery made whisky headlines last week, as they announced their first releases under the new ownership: a series of six single casks, ranging from 1978 to 1991.

Billy Walker (of Glendronach and Benriach fame), Trisha Savage (a longtime confidant of Walker with decades of experience in the industry) and Graham Stevenson (former MD of Inver House Distillers) bought the Glenallachie distillery mid-2017, and ever since whisky geeks have been eagerly awaiting the first signs of life from Glenallachie. Now, that moment has finally arrived.

A few weeks ago I visited Glenallachie, to see for myself what they’ve been up to, about which I wrote an article for Scotchwhisky.com. Read it, it’s very informative, if I do say so myself. Then yesterday I visited a masterclass where all six of the new single casks were poured, hosted by Alasdair Stevenson.

I would’ve loved to have tasted them right then and there, but since I could only get there by car, I poured the drams into sample bottles. However, that meant I could sit down in the comfort of my own home to write proper tasting notes, something I would’ve never done in the group setting of a masterclass.

Quick disclaimer: the drams were 15ml, while I usually prefer to have at least 30ml to be able to proper assess a whisky. However, I’m making an exception to my own rule for this one time.

Nose: Fresh, fruity (subtle hints of nectarine) and vibrant. Perfumed almost, with some light floral notes, but also lots of sweetness, highlighted by vanilla and caramel. Some very soft oak in the background.
Taste: Some tropical fruits appear, subtle grapefruit and orange peel, as well as sweet toffee and hints of caramel. Then it becomes a tad dry, with some oak-y notes. Quite spicy too, with a fair amount of ginger and white pepper.
Finish: Drying, and orchard fruits.

Nose: Hints of apple sauce, orange juice and muscat grapes, as well as a very subtle whisper of smoke and cloves, and quite a lot of hazelnut paste, as well as almonds.
Taste: Well-rounded and gentle, this is more classically sherried, with dried red fruits and milk chocolate. It has quite an herbacious side too, as well as showcasing orange zest and soft spices.
Finish: Sweet and fruity. Long.

Nose: Fresh sherry notes, with juicy plums and cherry syrup, followed by a hint of cotton candy, as well as polished leather. A whisper of pineapple. Whispers of tropical fruit, such as pineapple. Slightly metallic.
Taste: Quite a bit of oak, and a bit thin. There’s some honey and sultanas, but it is also pretty spicy and acidic, more so than I expected. Hints of menthol, as well as passion fruit.
Finish: A little more room for dried fruits here, as well as cocoa powder. Medium in length.

Nose: This has a slight dirty edge to it. Quite meaty, with stewed fruits, but also honey, caramel, wax and coconut shavings. Finally a hint of milk chocolate, soma raisins and ginger.
Taste: Sweet, dry and with a subtle sourness. Cherry syrup at first, then oak shavings, and spices (nutmeg and ginger mainly). Finally some dark chocolate.
Finish: A lingering dryness, and after a while some stewed apples.

Nose: Sweet raisins set to a spicy backdrop, with a touch of sulphur. There’s some rhubarb here too, as well as aceto balsamico, red union chutney and whiffs of pickled lemon. This leans to the sour side of the aroma spectrum, which makes it very interesting.
Taste: Surprisingly drinkable, even though this has the highest alcohol percentage of the six. There’s some licorice, maraschino cherries, and orange peel. Even a touch of sulphur again, but in this case that’s not a problem at all. To me it actually adds to the complexity. Finally some chocolate pralines.
Finish: All of the above. Long.

Nose: Well-balanced and extremely approachable, this has some classic dunnage notes and furniture polish, as well as fresh fruits such as strawberry, raspberry and mandarin. Then there’s mocha, warm chocolate brownie, and some baking spices as well. Very mature, but not at all oak-y.
Taste: Mouthwatering and syrupy, with lots of little intricacies. Rum raisins, prunes and milk chocolate, all the while supported by a spicy layer of nutmeg and cracked black peppercorns. Incredibly vibrant after nearly four decades spent in the cask.
Finish: Spicy, dry, and finally some cocoa powder. Long.

I know, what a cliche. I sort of wish I would be able to tell you something else, but the oldest and most expensive of the six is actually my favourite. The nose alone notches it above all the other single cask releases.

However, there’s plenty of other deliciousness to discover in this line-up. The two lower strength releases turned out to be my least favourite. Maybe not a complete surprise, as alcohol percentage should normally be much higher, even after more than a quarter century of maturation. This might indicate something slightly off with the casks.

That leaves three other releases, all of which hover at or just below the 90 point threshold, which should tell you how much I liked this trio.