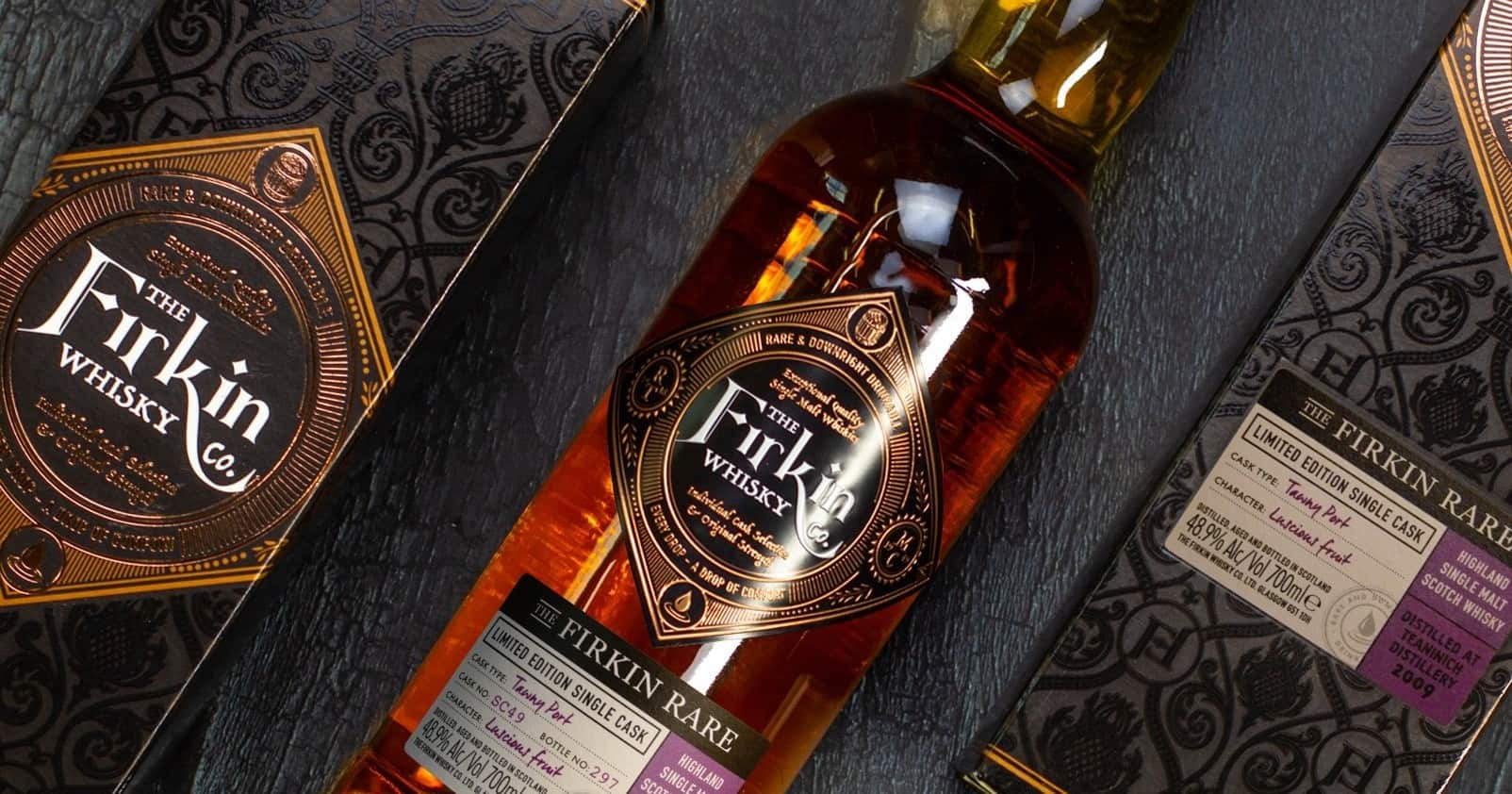 Have you come across The Firkin Whisky Company yet? I didn’t until Dutch distributor SPIRITS.services started importing their whiskies. By that I mean that I’d heard of them, but hadn’t yet tasted any of their malts. That changed recently when I attended an online tasting, where we went through a lineup including a Linkwood 2010, Tullibardine 2012, Teaninich 2009 and Caol Ila 2010.

There’s a few things you should know about The Firkin Whisky Company, starting with who its founder is. That would be Mike Collings, an industry veteran who has built up an impressive CV over the past 40 years. Especially during his time as Marketing Director at Diageo, where he was involved with many projects that have shaped the Scotch whisky world as we know it.

Where to start? Well, he had a hand in creating the Classic Malts, a range that has done as much to promote single malt whisky as any. But he was also involved in development of Johnnie Walker Green and Blue, as well as the Flora & Fauna series. It’s amazing really, and also highlights all the landmark work that Diageo has done for Scotch whisky.

The Firkin Whisky Company is Mike Collings latest project (Diageo is long in his rearview mirror). Their approach is to create double oak barrels by using staves from both first-fill ex-bourbon American oak casks and new Limousin oak casks with a custom char. The casks are built by Speyside Cooperage and hold 150 litres of whisky.

They then match each single malt they bottle with a particular fortified wine that is used to season the bespoke casks. The single malts of The Firkin Whisky Company are divided across four series based on the fortified wine used for finishing:

Finally, why is this independent bottler named The Firkin Whisky Company? A Firkin is a small cask of 41 litres, originally used for beer. But their custom casks are much larger. The answer is simple: they just liked the sound of Firkin. In part because it resembles another F-word, which allows them to market their whisky’s with language like ‘It’s Firkin awesome whisky‘, without actually saying something truly offensive. I wonder if anyone finds that charming?

Conclusion
Good integration of cask and spirit. I like what the Madeira cask adds to this Linkwood. You’ll have to be a sweet tooth, but luckily I am.
8.7

Nose: Quite malty with a hint of sauerkraut, but also shortbread, orange peel, forest fruits and peanuts. A hint of Werther’s Original too, as well as balsamic and pot ale.
Taste: Quite oak forward (the European oak is certainly noticeable). Dry with charred oak, macadamia nuts and a hint of cracked black peppercorns. Also a touch of scones and biscuits as well. Very soft orchard fruits.
Finish: Nuts, bitter chocolate and spices. Slightly grassy there in the end. Medium in length.

Conclusion
Read good things about this Tullibardine, but it’s my least favourite of the bunch. The oak spices were just a bit to pronounced.
8.2

Nose: Soft red fruits with a hint of beeswax and honey, as well as orchard fruits such as apples and pear skin. Finally a touch of Demerara sugar, subtle berry fruits (blackberries, cassis) and citrus zest.
Taste: Notes of cereal and charred oak, maybe even some rubber, but also red berries and a dark honey, followed by a hit of dried apricots and walnuts.
Finish: Subtle spices and sweet fruits with some light tannins. Medium in length.

Conclusion
Not nearly as winey as some Port cask whiskies are, there’s a neat level of equilibrium between the Tawny Port and Teaninich. The spirit is still recognisable, but the port adds a distinct fruitiness.
8.4

Nose: Kippers, charred beef and peat smoke with a hint of brine. Soft apricot marmalade and melted butter too, accompanied by a gentle sea breeze and tobacco.
Taste: Warming wood smoke, soft notes of honey, apricots and pickled lemon too. Quite a decent salinity as well, followed by a touch of limestone and caramel-glazed apples.
Finish: Cured meats, minerals and lingering bonfire smoke. Long.

Conclusion
A somewhat meaty, civilised Caol Ila that showcases the dependability of this distillery. You'd be hard-pressed to find a subpar Caol Ila, and this isn't one either.
8.6

As far as first impressions go, this was a nice one. There’s always a bit of a ceiling when all you bottle is single malts from the same age range (around 10-years of age), no matter what cask trickery you think up. Then again, this isn’t a brand that takes itself too seriously.

Despite all my earnest reviews on Words of Whisky, I would agree that whisky shouldn’t be dissected too much if you really want to enjoy it. That’s what I try to do when I’m not writing tasting notes, and The Firkin Whisky Company’s range fits into that mindset, but also offers a number of contrasting styles to keep things interesting.