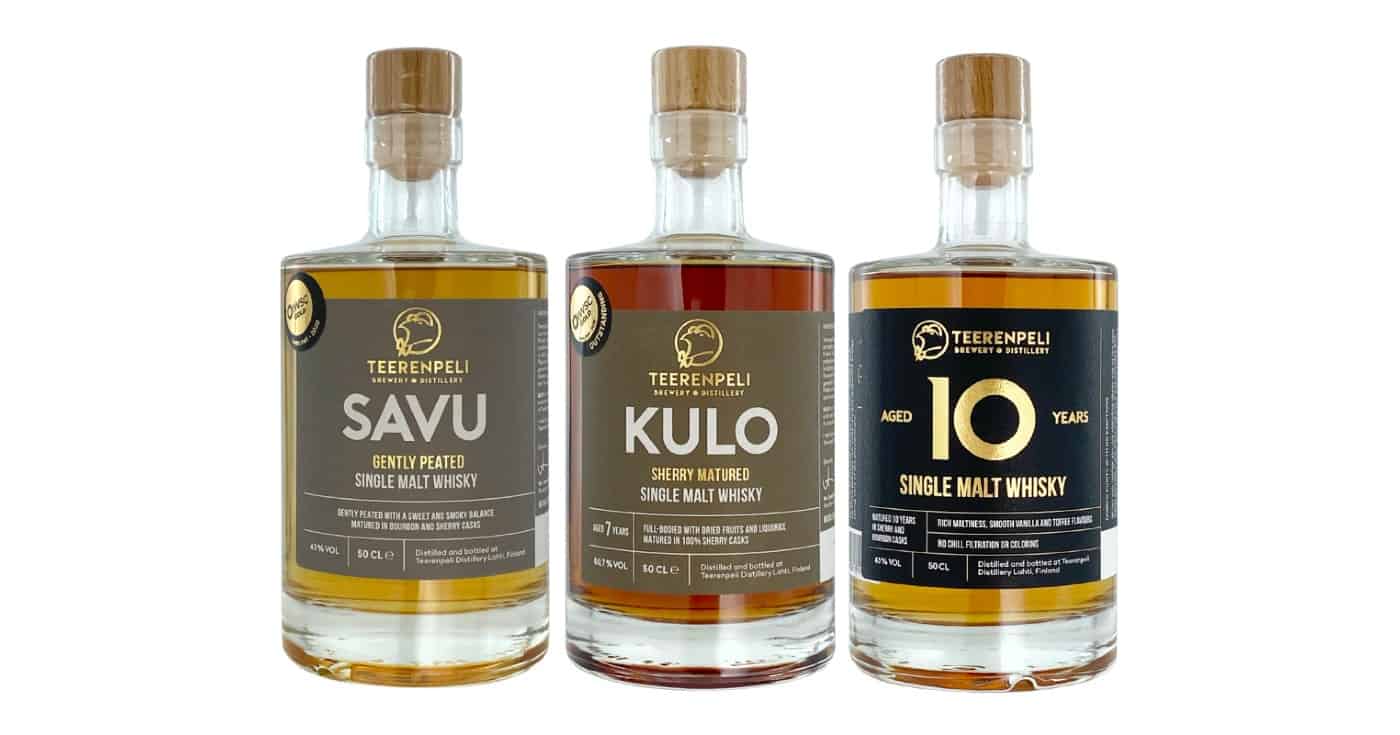 Just a few months ago I had never tried anything from Teerenpeli. Since then I’ve visited the distillery in Finland, written an article that will be published in the next issue of Whisky Magazine, and have shared the first review of Teerenpeli on Words of Whisky. Today I’m joining Teerenpeli in celebrating their 20th Anniversary by working my way through some of their core range single malts – Savu, Kulo and the distillery’s 10-year-old.

If you really want to read in-depth about Teerenpeli, I suggest waiting for my Whisky Magazine article. But in anticipation of that I’ll share a little background. First of all, when I write about celebrating Teerenpeli’s 20th Anniversary, I don’t just mean they were founded in 2002. The first-ever Teerenpeli spirit actually flowed from their pot stills 20 years ago to this day, on the 23rd of September 2002.

The brand Teerenpeli has been around for longer. First as a restaurant business, then as a brewery. The original distillery was located in the cellar of one of Teerenpeli’s restaurants in Lahti, a medium-sized city just north of Helsinki. It is still around, but not so much for the production of whisky. Gin, yes. And some experimental whisky batches too. But the main distillery now sits on the edge of town in a very lush industrial park.

And when I mean lush, I’m not just talking about a few strategically planted trees. An impressive 74 percent of the city is covered by trees. And a further 11 percent by water. Lahti truly is a green town, both literally and figuratively, having been awarded European Green Capital 2021 for its merits in pioneering environmental action. Teerenpeli too prioritises sustainability, as evidenced by their wood pellet plant and other measures they’ve taken.

Much of Teerenpeli’s resources are sourced locally. They’re in the middle of a region were lots of grain is grown, and Viking Malt, one of Europe’s oldest maltsters, is located just across town. Peated malt is sourced from Scotland and Belgium, as there’s no-one nearby to provide it. As for water? They’ll never be short on that. There’s a reason Finland is known as the land of a thousand lakes (there’s actually more than 180,000 lakes).

Most of the distillery’s core range is bottled at 43 percent, which contributed to me having overlooked them for such a long time. If you’re relatively unknown, you’re at a disadvantage (with me at least) if you deliberately choose a low bottling strength. There’s always other whisky to taste that seems more interesting at first glance. But one mitigating circumstance are the Finnish alcohol laws.

Teerenpeli has to register alcohol percentages with the Alko chain, which are the government-controlled shops that sell alcoholic beverages. There are quite some hoops to jump through, which is why they’ve currently registered four alcohol percentages, 43%, 50.7%, 58.5% and 61.7%. The two latter ones are mainly used for private cask releases.

Okay, I suppose that’s enough of a teaser for the article that’ll be coming out. Onwards with the whisky. Here are my thoughts on Savu, Kulo and the Aged 10 Years from Teerenpeli.

First launched in 2015, the Teerenpeli Aged 10 Years is made from Finnish barley and matured in 85% ex-bourbon casks and 15% ex-sherry casks.

Nose: Fresh, cloudy apple juice with Werther’s Original, butter and some relatively active oak, as well as a hint of fennel, straw and grape must. It’s gentle, slightly unusual, but really pleasant too.
Taste: Worries about a thin mouthfeel were premature. It is pleasantly present, almost oily even. Oak shavings make an encore, but there’s also a gratifying zesty fruitiness, some hops, tinned pineapple and vanilla. Finally some sweet malt too.
Finish: Medium in length and somewhat dry with an herbal bitterness.

Conclusion
A single malt that wouldn’t look out of place in most line-ups, the Teerenpeli Aged 10 Years is a pleasing mixture between oak and spirit. Sometimes it seems like the whisky is in danger of being too oak-y, but it never really is. Nice balancing act.
8.4

Teerenpeli Savu is distilled from peated malt and has matured in a mixture of 80% ex-bourbon casks and 20% ex-Pedro Ximénez sherry casks.

Nose: A hint of plasticine, driftwood and bonfire smoke. The peat has integrated neatly with gentle notes of peach, apricots and apfelstrudel with vanilla sauce, but there’s also an interesting note of sauerkraut.
Taste: Gentle wood smoke, somewhat ashy. Less oily and thinner than the 10-year-old, but there’s sweet peat, coffee grounds and a touch of white pepper, accompanied by almonds and cocoa. Finally some nutmeg and cloves, but also dried grass.
Finish: Relatively short, especially for a peated whisky. Ashy.

Conclusion
More so than the 10-year-old, the Teerenpeli Savu could’ve benefited from an increase in abv. It would’ve likely helped with the mouthfeel and the length of the finish. Having said that, this is still a very pleasant whisky, just not one that’ll be edged in my memory.
8.2

Teerenpeli Kulo is distilled from local barley, and the lightly peated new make has matured for 7 years in sherry casks. This is bottled at a higher strength compared to most core range offerings.

Nose: Rich and more of an immediate expressiveness than the single cask that was bottled by Berry Bros & Rudd. There’s aceto di balsamico, rum raisins, honey and dates, but also a hint of ashes and tar. Then some redcurrants, dark chocolate and dark-roasted grains.
Taste: Entirely different from either the 10-year-old or Savu. Perfect drinking strength. Rich, sweet, sticky mouthfeel with lots of raisins, dark honey and freshly pressed stroopwafels, but also a touch of burnt caramel. Just a thin veneer of tarry smoke. The cask influence is strong in this one.
Finish: Very gentle peat with intense sweeter notes and soft spices. Long.

Conclusion
If, like me, the price of the Teerenpeli Sherry Cask by Berry Bros & Rudd was a bit too rich for you, the Teerenpeli Kulo is a perfect alternative. Similar, somewhat sweeter profile, but roughly half the price. It relies on the cask a lot, but the cask selection is spot on. No off-note whatsoever.
8.7

The main takeaway for me is that Teerenpeli produces a quality new make that does well in a range of cask types. That’s also based on some other expressions I tasted at the distillery, including quite an excellent port-finished single malt called Portti (which means gate in Finnish).

Considering the strict alcohol laws in Finland, I understand how the restricting environment has played a role in the lack of flexibility when it comes to maybe upping the abv. But seeing just how much of a difference the higher strength made in the Teerenpeli Kulo, I would hope more of their future whiskies will be bottled at 50.7 percent.

But even if they’ll don’t deviate from their current course, I’ll gladly keep on drinking Teerenpeli’s whisky. This distillery is producing flavourful whisky with integrity. And it is relatively affordable too, which certainly isn’t a given for some of these smaller distilleries on the European mainland.

Finally a huge congratulations to the entire Teerenpeli team!