The Teeling Small Batch Whiskey is a blended Irish whiskey from the Teeling Whiskey Company, that has spent a second maturation period in rum casks. Owned by brother Jack and Stephen Teeling, they also have their own distillery in Dublin, founded in 2015.

The whiskey used for the Teeling Small Batch Whiskey is sourced from another distillery. Most likely it is from Cooley Distillery, which was owned by their father until 2012, when it was sold to Beam International. But the Teeling brothers negotiated with Beam to sell them 16.000 casks of Cooley whiskey. So the chances are very slim that the whiskey used for Teeling Small Batch is from somewhere else than Teeling.

Nose: Slightly dusty with a trace of burlap followed by an array of soft orchard fruits. Apples, pears, nectarines. Also a whiff of oranges. Appealing.
Taste: Unexpectedly spicy and slightly bitter. Ginger, but also a fair amount of glue. There’s brown sugar, white grapes and oak shavings. A big step down from the nose.
Finish: White grapes, but the spices dominate. A lingering woody bitterness.

The palate tastes young and is somewhat aggressive. A shame, because I found the nose quite appealing. 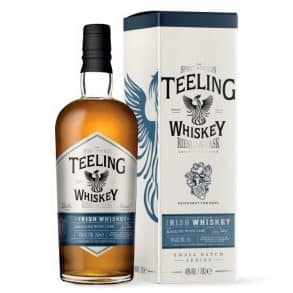