After my first proper introduction to Starward about six months ago or so, this distillery is quickly finding its way into my whisky diet (which I realise is a horrible way to phrase it). It’s only been available in the Netherlands since last year, but I’ve fallen hard for Starward. That’s why it’s high time to take a closer at the Starward Solera, the first-ever expression released by this Australian whisky distillery in Melbourne.

Now, if you’re an avid Scotch whisky drinker, I feel it is important to have the right expectations. Unlike many upstart distilleries, Starward isn’t trying to emulate Scotch. Starward is young, wine matured whisky. Not something your average Scotch whisky lover will naturally gravitate towards. But Starward are very much forging their own path and I feel their approach is truly commendable. Most of their whiskies are relatively affordable and 100% meant to be drunk. Starward is not an investors’ whisky.

Importantly, Starward uses local grains. “We grow a great amount of really good quality barley in Australia”, explains head distiller Sam Slaney. “A lot of it goes into beer, but we’ve got a good network of farmers and growers locally, as well as maltsters. We’ve used Scope, Spartacus and Planet, which is what we’re using right now. We kiln slightly more than traditional distillers, slightly darker than the standard distilling malt. That gives a bit more flavor development in the malt which we see come through in the process.”

Most of their whisky matures in wine barrels. Australia has such a strong wine industry, so it only makes sense. The first ever barrels they used were ex-Apera barrels, an Australian version of sherry. It’s these types of barrels that the Starward Solera matured in, which was the distillery’s first release back in 2013. Starward also uses Tawny barrels (Australian port). And pretty early on they started experimenting with table wines, specifically red wines like Shiraz and Cabernet Sauvignon.

“We have a really interesting maturation environment”, says Slaney. “Melbourne is known to have four seasons in a day; we have really strong seasonal weather. We get huge temperature changes daily, but there’s also a big difference between winter and summer. We also store our barrels high, up to five or six meters high in tin sheds. So, we get big variations in our warehouses as well. We’re embracing our environment. What we found is that we get good, mature whisky in three to four years. That’s our sweet point. If we go beyond that point, the extraction from the barrels becomes too high.”

Starward design their spirit to suit the short timeframe. By their own admission, they kind of follow that New World whisky model that Jim Swan put together; clean spirit into good barrels. Slaney: “We really focus on fermentation and wash quality. Basically, all the members from our team either come from brewing or wine making. Both skills sets are really valuable. We use two yeast strains; a common M1 strain but also a brewing, high-ester strain. We ferment for three days and at that point our wash is bone-dry, really juicy and fruity. It also has a mild phenolic quality and acid from the lactic-acid bacteria. The wash has to be good otherwise you’re pushing shit uphill.”

Starward uses traditional double pot still distillation. They have a jacket on the neck of their spirit still, which allows them to control reflux. Starward runs relatively tight cuts. They don’t want too much feints character coming in, which would give the spirit too much weight. They want their spirit to be lighter, cleaner and fruitier, but still have good malt character and plenty of esters. It needs to be able to integrate with the barrel, so it can’t be too clean that the wood starts to dominate.

That’s also why they fill their barrels at just 55 percent. It results in a softer product, while Starward filled at higher strength would have more heat and be harsher. Because of the Melbourne climate, the whisky creeps up in alcohol during maturation. It gains one or two percent every few years and loses a lot of water. That’s part of why that lower fill strength really works for Starward.

Nose: Light orchard fruits, Werther’s Original and figs with a touch of honey, vanilla frosting and cardamom. All very subtle yet rich and comforting with just a hint of rose petal and fennel.
Taste: A mix of dark red fruits and gentle wood spices, it’s very drinkable yet never boring. Sweet caramel, creme brûlée and soft notes of cinnamon and black pepper.
Finish: A whisper of menthol, lingering spices, a candied element and a pleasant dryness. Really good.

A single malt of no discernable age and bottled at a low percentage, yet it is rich and has a satisfying complexity too. Quite an accomplishment by Starward. If you hadn’t already, they deserve your attention. 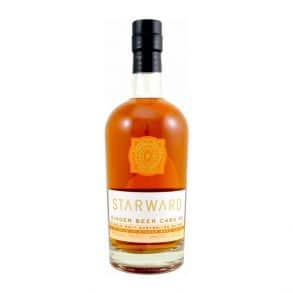