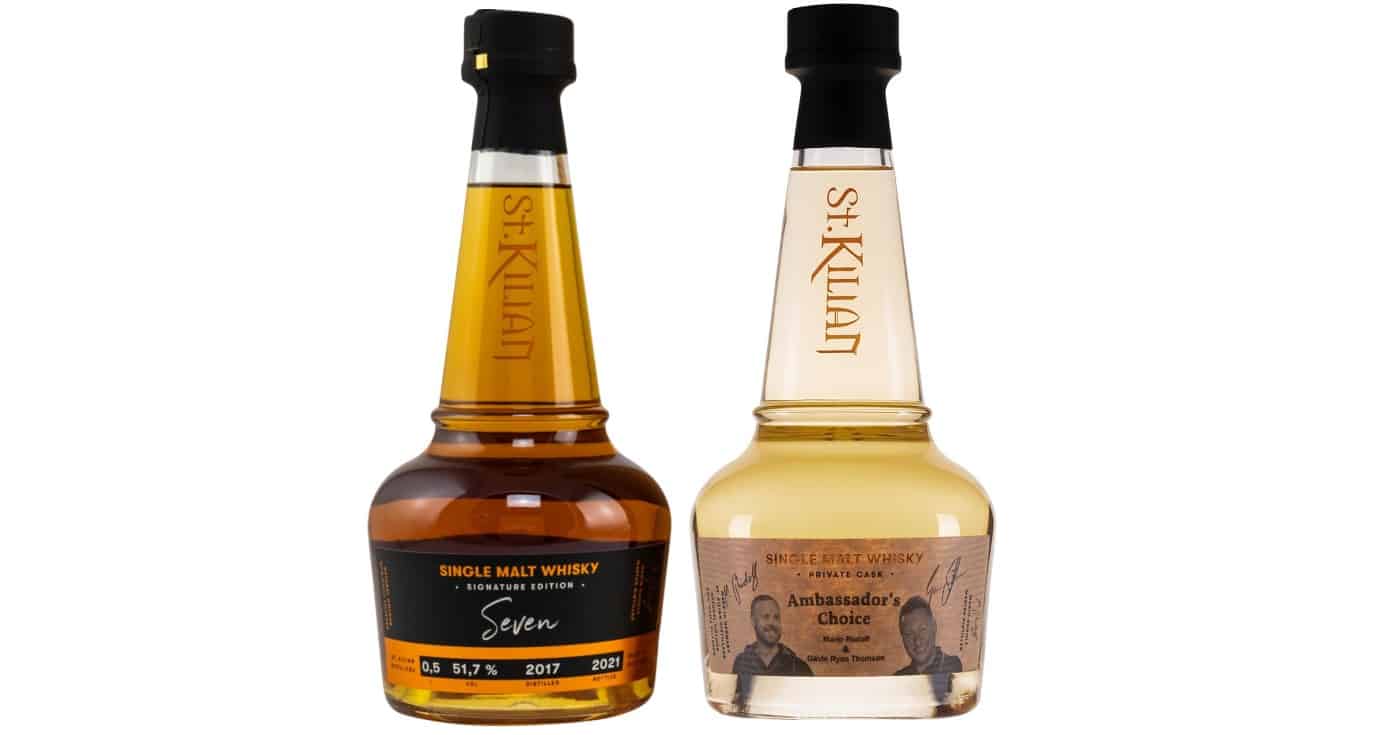 Unless you’re from Germany it’s not very likely that you’ve heard of St. Kilian Distillery. Although maybe that’s not fair, because while St. Kilian Distillery is a small player in The Netherlands, they might be well-known in other countries. Anyway, they were certainly but a blip on my radar when I was first contacted by Gavin Ryan Thomson.

You might be familiar with Gavin. He’s a passionate brand ambassador for Bowmore, and really loves all things whisky. Originally from Ayrshire, Scotland, he’s very knowledgeable and now lives in Germany. German whisky drinkers will likely have seen him at one of the country’s many whisky fairs. Gavin is also an honorary ambassador and fan of St. Kilian. Even so much that he recently collaborated on a St. Kilian Ambassador’s Choice bottling.

“I am excited to bring out this Ambassador’s Choice,” he told me. “It matured in ex-Bunnahabhain Staoisha casks, and is made from unpeated pilsner and caramel malt. I love these Bunnahabhain casks. I wanted to bring out a cask strength version. You’re getting it straight out of the cask into the bottle, and people can add water themselves if they want to. I think it is a really good dram.”

St Kilian Distillery was founded in 2016 by Andreas Thümmler and designed by Irishman David Hynes. Hynes is a friend of Thümmler, but most importantly also a former managing director of Cooley Distillery. He’s also been involved in the development of whiskies such as Tyrconnell, Connemara, Greenore or Kilbeggan. Mario Rudolf is the master distillery of St. Kilian Distillery.

Because of the German-Irish roots of St. Kilian Distillery, it might be surprising to learn that they’re production process is modelled after the Scots. “They got all their stuff from Forsyth’s in Scotland, so they distill the way the Scots do,” Gavin says. “You don’t see that often in German distilleries. The washbacks are from Oregon pine. It’s like a mini Scotland in Germany.”

Nose: A floral first impression (rose petals) followed by a heavy sherry influence, although not to the point of domineering the spirit. Lots of sultanas, some walnuts, pralines and fermented grapes. There’s a whiff of mint and aniseed in the background. Very clean and crisp.
Taste: Very oily, but quite an aggressive arrival. The oak is fairly dominant, but it’s also fairly spicy and alcoholic. Lots of cloves, some coconut shavings and a fair amount of black pepper. I also get burnt toast and hints of fennel, with sweetness from toffee and crème caramel.
Finish: More toffee as well as some mint. Medium in length.

Conclusion
The palate can’t quite keep up with the nose, which is much more refined and delicate comparatively.
8.3

Nose: Some very subtle vegetal peat on the nose, as well as sauerkraut (and I’m not just saying that because this is German whisky). But it’s mainly the notes of vanilla custard, barley husks, warm milk and mint that stand out. There’s also a hint of baked apples and orange peel. Extremely inviting.
Taste: Oily mouthfeel. It comes in a bit hot (the abv is massively high after all) with white pepper and ashy notes from the Staoisha cask. Water is no luxury and brings out vanilla notes, smoked barley husks, peanut skins, as well as green tobacco and aniseed. There’s a touch of charred lemon peel as well.
Finish: Some chalk, a touch of smoke and apple sauce. Medium in length.

Conclusion
There's some immaturity on the palate that might be exacerbated by the high abv, but adding water makes a big difference. The nose is relatively mature and nicely balanced.
8.6

There’s a maltiness to these whiskies that I really love. I would say both these single malts are best suited as nosing whiskies. Despite the massive differences in abv and cask type, the palate of either of these St. Kilian whiskies has a bit of an unpolished side. But they’re certainly doing something right.

This being the first two releases I’ve tried of St Kilian Distillers, I can’t conclude what is the influence of the spirit or the oak. It would be interesting to work myself through a lineup of their range. Trying the new make would probably give more insight too. Anyway, I digress. Massive thanks to St. Killian Distillers and Gavin for sharing these whiskies!