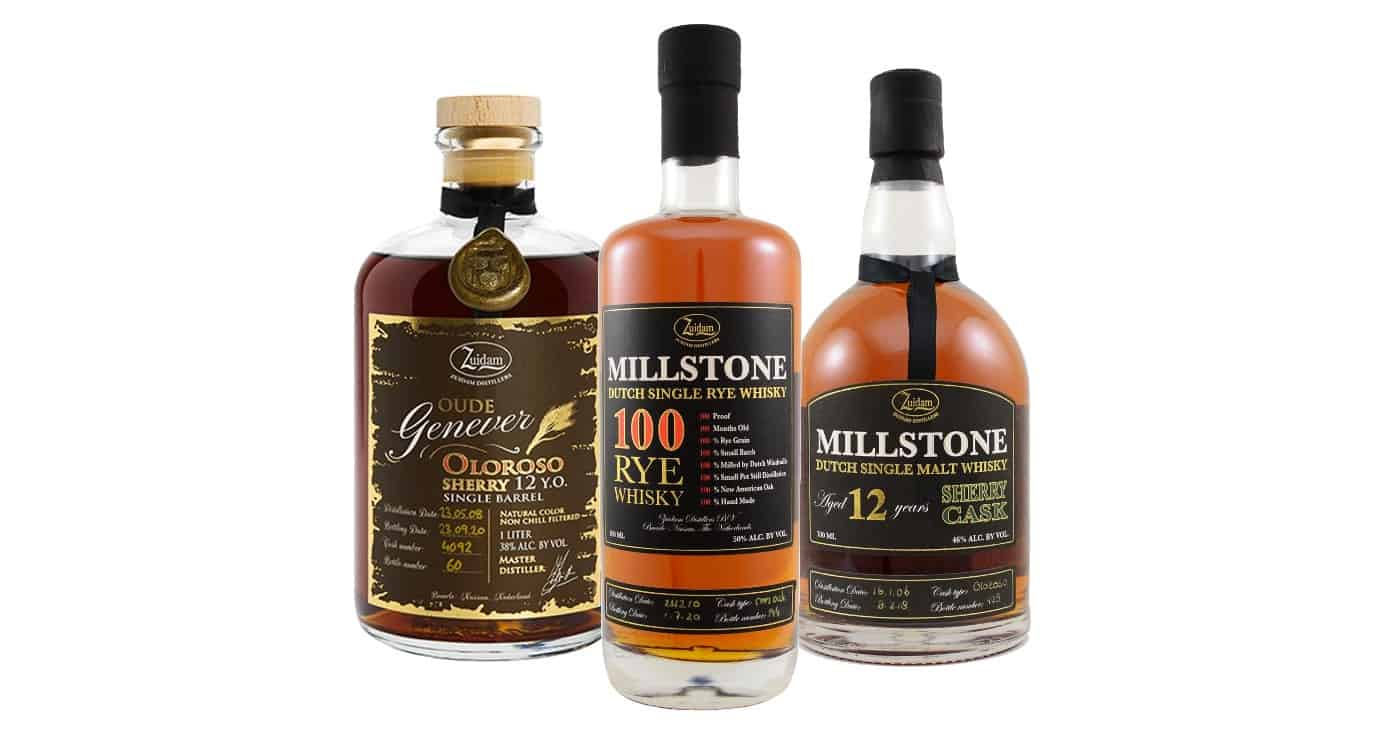 I’ve long been thinking about the subject of my 8th anniversary post. In the end I settled on a producer I’ve been wanting to spotlight more, but haven’t done much of in the last few years. So finally I’ll be doing a deep dive into Zuidam Distillers and their spirits. Not just single malt whisky, but also rye and genever.

Further down you’ll find reviews of the Zuidam Oude Genever 12 Years Oloroso Single Barrel, the Millstone 100 Rye and the Millstone 12 Years Sherry Cask. But first a closer look at the most prominent whisky and genever distiller of the Netherlands, and some of my personal thoughts on them.

The first-ever product from Zuidam I tried was their Millstone 100 Rye, gifted by a buddy of mine who has since sort of lost interest in whisky, but I’m forever thankful he introduced me to Zuidam (and whisky in general). I almost never buy the same whisky twice, but when that first bottle of Millstone 100 Rye was empty I bought another one. And another one.

In the years since I’ve been lucky to come across master distiller Patrick van Zuidam several times. Maybe most notably in 2017, when he was one of my lecturers during a year-long, comprehensive spirits course. But the most memorable time I spent with him was not long before COVID-19 crippled the Netherlands and the rest of the world.

Patrick showed great hospitality on February 12th in 2020 when he welcomed the publishers of an international spirits magazine, a photographer and me to his distillery in Baarle-Nassau, just a stone’s throw from the Belgian border. We spent the entire day exploring the distillery, warehouses and spirits of Zuidam Distillers.

I learned a lot and looked forward to publishing a detailed article about my experience in the aforementioned magazine. But due to circumstances beyond anyones control that article still sits on my computer somewhere. COVID-19 took everyone by storm, the world changed and not an issue of the spirits magazine has been released since.

Even though nobody is at fault here, I guess I feel somewhat guilty that Patrick doesn’t have anything to show for all the time and energy he spent on us. In an effort to right that wrong, I’ll share some of what we talked about here, on Words of Whisky. After all, why else have I been running and nurturing this platform for the past 8 years, if not to write about the products and people that inspire me?

Zuidam Distillers is a Dutch distillery producing whisky (sold as Millstone), genever and many other spirits. It was founded in 1975 by Fred van Zuidam, Patrick’s father. They’ve been around longer than the current crop of modern craft distilleries but can’t boast centuries of history. They have some solid distinguishing characteristics, but choose not to boast about them in advertising campaigns.

For example, founder Fred spent decades honing his craft at one of the oldest spirit companies in the world. Furthermore, the distillery is located in a part of Europe that used to be (in)famous for illegal distilleries smuggling their wares across the border into Belgium. They also grow their own grains, with a special focus on rye, which are then milled in a Dutch windmill. Finally, the sherry casks used for maturation consist exclusively of old solera casks.

But it’s their products that do the talking, not an elaborate marketing strategy centered around any of the above. Quality is what they focus on. I know that’s a cliche, but I wouldn’t write it if it weren’t true. In the words of Patrick: they are trying to construct a Ferrari rather than a mid-sized family sedan. Hopefully I can convey that philosophy just a tiny bit in the remaining paragraphs.

No Room For Romanticism

What I love about Patrick is his enthusiasm for distillation and challenges, while seemingly not being bothered by the romantic part of the job. That attitude is reflected in the distillery, which isn’t a romantic place at all. Instead it is a production facility where everything is geared towards making the best possible spirit.

Truly, Zuidam Distillers is probably one of the most unappealing distilleries you’ll encounter. Located in an industrial park, it sits across from a municipal waste recycling point and neighbors include a car dealership, an DIY shop and a window fitter. You’ll miss the distillery if you’re not careful; there’s barely any signage.

Patrick has been involved in the family business since he was 12 years old. Long before it became fashionable, Patrick started championing genever, mostly because it was a challenge. “Even though I’m Dutch, none of my generation are natural genever drinkers, but from a technical standpoint genever is a very interesting drink for a distiller,” Patrick told me.

“My Scottish and Irish friends might disagree, but genever is probably the oldest distilled spirit in the world. It’s our heritage. I just thought it was such an interesting intellectual challenge to make genever from scratch. Get the grain, mill it, mash it and distill it. Doing it that way was the only interesting way to me.”

Always Looking For A Challenge

Patrick is always looking for new challenges and ways to improve. Ask him what his best whisky is, and the answer is always the same: the one he’s currently distilling. Indeed, he’s confident, can come across as cocky, but gets away with it because he is clearly one of the most skilled guys in the room.

One of his most lauded products is his rye whisky. More specifically, the Millstone 100 Rye. It is a difficult crop to ferment and work with, but Patrick has wholeheartedly embraced the challenges of rye. “For our rye products, we use a ‘very secret’ mixture of fifty percent rye and fifty percent malted rye. Rye is so hard to work with, it’s such a challenge. But I love it because it is a big-bodied, big-boned whisky that ages really well.

“If you have very delicate, Jim Swan-type whiskies, they reach their peak sooner. A heavy new make will peak later and thus has more opportunities to develop. Almost all my rye whisky is filled into virgin oak casks. Surprisingly enough that works really well even after twelve, thirteen years or longer. But I’ve also filled some rye whisky in Oloroso and Pedro Ximénez casks.”

Ar Zuidam they adore sherry casks. Not the seasoned sherry casks used by most of his international colleagues, but the vintage solera casks that are decades old – if not much older. They play an intricate role in the spirits Zuidam Distillers produces. They actually rarely use ex-bourbon casks.

“Nothing is right or wrong in our business,” Patrick explains. “It’s just a simple irrefutable fact that seasoned sherry casks produce different flavors than solera casks. But they come with their own share of problems. I once had forty butts leaking. The old wood is simply not as strong.

“There’s no cooperage around here, so I had to send them back to the South of Spain. But I love the flavor these old sherry casks give me so much, it’s worth it to me. When you open the door [of our warehouse], that smell, you can’t compare it with a seasoned sherry cask.”

There’s no cutting corners in Patrick van Zuidam’s world. His drive for excellence is key to his distillery’s succes. And it is part of what makes me a sucker for their products. It’ll take some getting used to if you only drink Scotch single malt. Solera cask matured whisky can be very different. Genever too, because it is made from a number of different grains AND it includes botanicals. But challenge yourself and I’m confident you’ll be rewarded.

Nose: Loads of dried fruits like dates, raisins and figs, but also some notes of fresh strawberries and cherry syrup. Finally touches of chocolate, soy and orange marmelade. It’s certainly the cask that does a lot of the talking. Mind you, not necessarily the oak but rather the previous contents.
Taste: Rich and cloying with some tingly spices but mainly the opulent sherry influence already present on the nose, with maybe just a few added herbal touches, some roasted marshmallow and light resin notes.
Finish: Lingering spices, some walnuts and dried fruits. Short to medium.

Zuidam Oude Genever CONCLUSION
A fascinating display of the Oloroso solera cask, the Zuidam Oude Genever 12 Years Oloroso Single Barrel is a top notch grain distillate. Sometimes I find the low abv of these genevers a detriment, especially if you regularly drink cask strength whisky also. That’s not the case here. This stands up even at just 38 percent. Thanks to Paul for sharing!
8.7

Nose: There is a grainy foundation highlighted by barley husks and rye bread, but the sherry influence is undeniable. Notes of cinnamon, hazelnuts, and chocolate but also raisins. There’s this elegant fruitiness of sultanas and passion fruits. Very approachable.
Taste: Not as uncompromising as the Oude Genever, the Millstone 12 Years Sherry Cask arrives on subtle spices followed by an assortment of fruits like oranges and apples, but also honey, tobacco and milk chocolate.
Finish: Lingering spiciness with notes of mint, roasted almonds, apple peel and beeswax.

Nose: Lots of fresh rye with notes of black peppercorns, cardamom and sandalwood, but also a fragrant, almost perfume-y side accompanied by citrus, peaches and honeycomb. Finally some intense chocolate touches.
Taste: A rich, oily mouthfeel. After a spicy arrival with notes of English breakfast tea it develops into sweeter territory. There’s honey, a sprinkle of cinnamon and some mango as well as more peaches. But the rye is undeniable, as is the whiff of tobacco and aniseed.
Finish: Lingering notes of mint, chocolate and black pepper, while ending on honey, vanilla and stone fruits.

Millstone 100 Rye CONCLUSION
The Millstone 100 Rye is a flavour bomb that might scare some people off. To me it is pretty much perfect as is. The virgin oak interplays nicely with the rye spiciness. Balance is added by fruits and sweetness. And it makes for a wonderful Old Fashioned.
8.8

Celebrating the 8th anniversary of Words of Whisky with quality Dutch spirits from Zuidam has been a privilege. Three spirits but all offer very different experiences. If you’re a malt whisky drinker only, the Millstone 12 Years Sherry Cask is the safe but boring choice. While good, I don’t find it offers the same depth of flavour OR value as either the Millstone 100 Rye or the Zuidam Oud Genever 12 Years Oloroso Single Barrel.

The Zuidam Oude Genever might not be an example of traditional Dutch genever, but it is a great malternative and top grain distillate regardless of what spirit category it falls into. The Millstone 100 Rye has been a classic for years (at least in my mind), and proves that status here once more.