Something Special Is Happening At Waterford Distillery

The Irish distillery Waterford is one of the most exciting new distilleries in the world, if not the most. Sounds like hyperbole, I know. If you have the patience to fully read this article, you might understand why I think my claim is not at all exaggerated. After visiting the distillery, I’m convinced of it.

Waterford is a project from Mark Reynier, well-known for reviving the Bruichladdich distillery on Islay, Scotland. By the way, I’ll post an in-depth interview with him in a couple of days, if that’s your sort a thing. Anyway, Reynier left Bruichladdich after it was taken over by Rémy Cointreau, setting his sights on Ireland. The philosophy of terroir he developed at Bruichladdich will now be taken a step further at Waterford.

The Waterford Distillery wants to highlight different types of barley and the soil on which they’ve grown. To do this, they’ve contracted 46 farmers to grow 8 varieties of barley for them on 19 different types of soil. All farms are located in south east Ireland. The barley from every farm is distilled in batches, separate from the harvest of other farms. This basically leads to Waterford producing over 40 types (the six organic farms are distilled together) of new make spirit. Impressive. We’ll get to tasting them in a little while.

Waterford is not a quaint little distillery, and there’s good reason for it. It’s a big modern building, situated on the banks of the River Suir. It’s not far from the N25, just on the edge of the Waterford city centre, and easy to reach by car. Up until 2013 Waterford Distillery was actually a brewery owned by Diageo, producing Guinness concentrate, which was shipped overseas (much of it to Africa) and combined with locally brewed, pale malt lager to create Guinness Foreign Extra Stout. Sounds delicious, no?

From brewery to distillery

The Guinness Brewery was built in 2003 and came valued at a whopping 40 million euro. Diageo closed the plant in 2013 and moved all operations to their Dublin site. This worked out well for Mark Reynier’s company Renegade Spirits, which bought the distillery for ‘just’ 7,2 million euro in november 2014. After investing time and more money, the first spirit run of Waterford Distillery took place in December 2015. It was the starting point of an enormously interesting journey, one that I can’t wait to see unfold.

Earlier this year I spent a week in Ireland, enjoying its scenery and its pubs. Whisky was, unbelievable as it sounds, secondary. But visiting Waterford Distillery was an opportunity I couldn’t pass up. As I drove from county Kerry up to Dublin, I made a quick detour to Waterford. A long drive, but this being the only rainy day I had during my seven days in Ireland (I know!), spending some time in the car wasn’t all bad.

A big (not so) old factory

Waterford Distillery isn’t generally open to the public (yet). But if you ask kindly, they might just take the time to show you around. Or in my case, I was there because I was working on an article about Waterford for a Dutch publication. Head Distiller Ned Gahan was kind enough show me around the premises.

Even though Waterford Distillery has only been in production for less than two years, Ned has been around for 18 years already. He was part of the workforce of the Guinness Brewery, and started his career in the drinks industry at another brewery in an adjacent building on the same site, where they used to brew Smithwhick’s. Now he’s distilling whisky (indeed, without the extra E).

To be honest, Waterford is not the most attractive distillery to visit purely from an aesthetic point of view. It’s a factory, and the pot stills are the only two obvious clues that you’re standing inside a distillery. But because of Waterford’s philosophy I can’t help but walk around the distillery all excited. Because it is a former brewery, meaning some of the equipment is quite different from what I’m used to seeing in the Scottish distilleries I’ve visited.

Malting of the barley is done at Minch Malt in Kildare. Each harvest from each independent farm yields about 75 tonnes of malted barley. Now usually what you see next is that the malted barley has to be milled into a grist, most often by a decades old, indestructible Porteus-mill, after which it is ready to be mashed. Waterford instead uses a hydromill, which I think is unique for a distillery. It’s a device that was already in place when the brewery was bought from Diageo, and it works just as well (maybe even better) than a traditional roller mill, which is why it was decided to keep this piece of high-tech equipment.

I’m not sure if I completely understood Ned’s explanation of the inner workings of a hydromill, but here goes. It’s a device that has been developed to finely grind barley (or other cereals) under water. There’s a stationary disc and a rotating disc (none of which you can see from the outside) responsible for cracking the barley. Because everything happens under water you’ve an oxygen-free milling process. The hydromill is also basically the start of the mashing, with water being added to convert some of the starch into sugar.

After the hydromilling, the wet ground barley is transported into a mash conversion vessel. A piece of equipment that’s not unlike a traditional mash tun, but is also not at all the same. It does however do a similar job: converting starch into sugar and extracting it from the barley. Water is added in three stages, at temperatures of 46, 62 and 66 degrees Celsius.

Usually the next step would be to simply drain the wort out of the mash tun. But not at Waterford Distillery. They have a mash filter press. It’s a device very common to breweries, but an unusual sight at a distillery. Teaninich has had one since 2000, but I don’t know of any other Scottish or Irish distillery with one. The mash filter at Waterford is a big, ugly thing consisting of a couple of dozen cloth plates, in between which the mash is squeezed. The wort is collected and the draff is then removed.

The wash still has a capacity of 21.000 liters, while the spirit still can hold 15.000 liters. These stills are a heritage from Reynier’s time as CEO of Bruichladdich in Scotland. The stills were bought by Bruichladdich over a decade ago from the now demolished Inverleven distillery, once destined to be a part of the Port Charlotte distillery, sadly a project that never came to be. The stills now finally found a second home at Waterford.

The distillation is deliberately slow: a complete run takes about 12 hours. With the spirit cuts being made by hand, the slow distillation comes in handy for Ned and his distillers. It makes it easier to make the cuts at the right moment. The heads run for 30 to 40 minutes until the spirit reaches 75 percent abv, that’s when the heart start (although it varies per distilled batch of barley). When the spirit reaches about 66 percent, the next and final cut is made.

Now this is where it really gets interesting. Remember I told you that Waterford basically produces dozens of different new makes? I was lucky enough to try a couple of those, and find out for myself if this terroir thing is all it’s cracked up to be. After being going through milling, mashing, fermenting and the distilling stage, can you still taste provenance of the barley?

Ned grabbed two 20cl bottles from the Waterford library, and brought it with him across the street to what I think is the manager’s office. He poured the new make in glasses, a couple for himself too, clearly very proud to present the product to me.

The first Waterford new make I tried is distilled from barley grown on the land of farmer Martin Foley. His soil is rich in calcium. Foley’s new make turns out to be earthy and malty, with notes of early grey tea and chocolate.

How does the new make taste made from the barley of farmer Edward Harpur? Wonderfully different from Foley’s. The glacial sands that dominate Harpur’s soil have a vastly different effect on the spirit. It’s floral and fruity with lemon yoghurt and mango.

Both new makes took the exact same route, making their way through all the same modern machinery housed inside Waterford Distillery. Even still, they couldn’t have been more different unless one of them had been peated.

When filled into casks, the different new makes will be distributed equally among the cask types used at Waterford. Most of it will find its way into first-fill American oak; about 50 percent. The rest will be filled into 20 percent virgin American oak, 15 percent premium French oak and 15 percent VDN (vin doux naturel) casks.

Reynier’s idea is to combine all of the different new makes. They’ll share a lot of the same characteristics, but every new make also brings something unique to the table. The theory is this’ll make for an incredibly layered single malt whisky. Or as Reynier likes to call it, “the most profound single malt whisky that’s ever seen”.

I walked out of Waterford Distillery with a big, fat smile on my face. Something special is happening in this big ugly factory in a small Irish city. Fascinating stuff. I can’t wait to see how it all works out in the end. 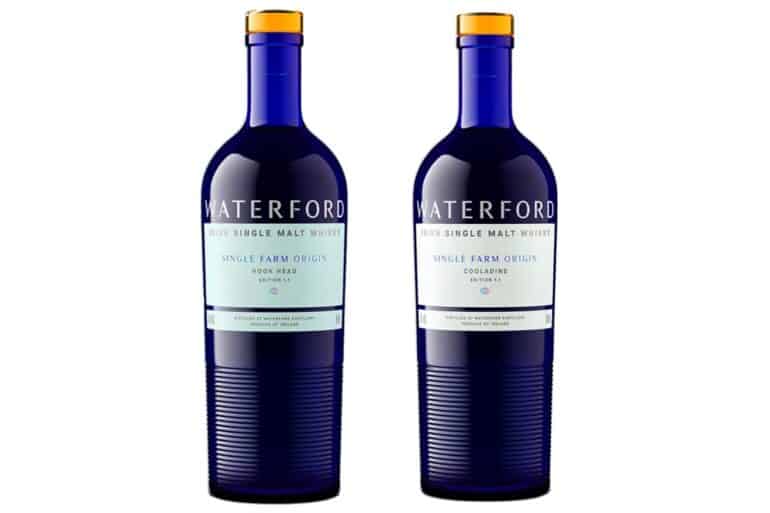