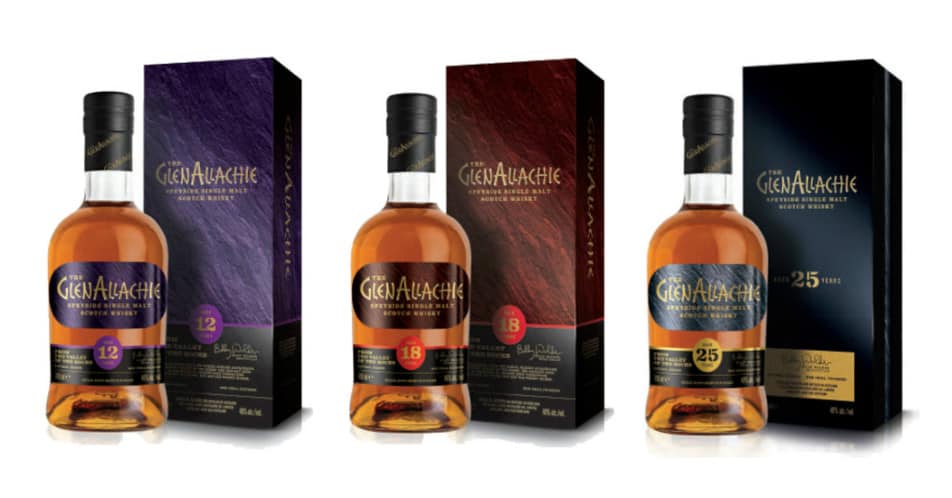 A little while ago I visited Glenallachie in Speyside, the distillery that was bought last year by a consortium led by Billy Walker. The first releases under new management, a series of six single cask releases for the 50th Anniversary of Glenallachie, caused quite the stir and sold out quick.

Another single cask edition was released at the most recent Spirit of Speyside Festival, but now the moment of the release of the core range finally inches closer. To be bottled later this month and distributed in June, these new GlenAllachie releases are highly anticipated by, well, everybody with an interest in Scotch single malt whisky.

After my visit in March, I left the distillery with three prize possessions. Samples of the GlenAllachie 12yo, 18yo and 25yo. I should mention that these samples represent a time when the core range was still a work in progress, but very much moving towards the final formulation.

Billy Walker might’ve tweaked the recipes a bit since then, but at the time he also mentioned that he would’ve never handed these samples out had he not felt comfortable with their quality. You can imagine how excited I am about getting a little sneak peak of this trio.

Nose: Opens up on a distinct vanilla note, lots of candied banana, pencil shavings and malted barley, as well as honey, and peach.
Taste: Soft honey notes, accompanied by banana. A somewhat creamy texture. Finally a gentle note of raisins, followed by subtle spices and a hint of cappuccino and cumin.
Finish: Lingering cocoa powder and banana. Medium in length.

Nose: Big and fudge-y at first, with some barley and lemon yoghurt, but it then moves on to balanced and friendly notes of apricot marmalade, sultanas and orange blossom.
Taste: Sweet arrival, with raisins and marzipan. Subtle citrus notes (bitter oranges come to mind), very light flavours of mocha, and gentle spices such as pepper, cumin and nutmeg. A touch of oak as well.
Finish: Apples and pears make a surprise entry here. Medium in length.

Nose: Delicate fruity notes of orange peel and sultanas, but it also showcases a distinct aroma of rye bread. Slightly nutty (macadamia), with a hint of cigar tobacco, honey and leather, as well as milk chocolate. Finally some soy. Great balance.
Taste: Dark chocolate and oranges, a classic combination that works really well. A hint of menthol here too. Some sultanas and almond oil, as well as marmalade. Gentle spices.
Finish: Spices and very subtle gentian root, with hints of mandarine.

The common thread for me? The subtle spices on the palate, which I feel elevates each and every one of these whiskies. I won’t say these are crowd pleasers per se, as they are somewhat challenging at times. To me, that’s a good thing, to someone else it might not be. Whatever the case, these are worth your time. A range that doesn’t emulate, but instead follows its own path.

Samples provided by The GlenAllachie