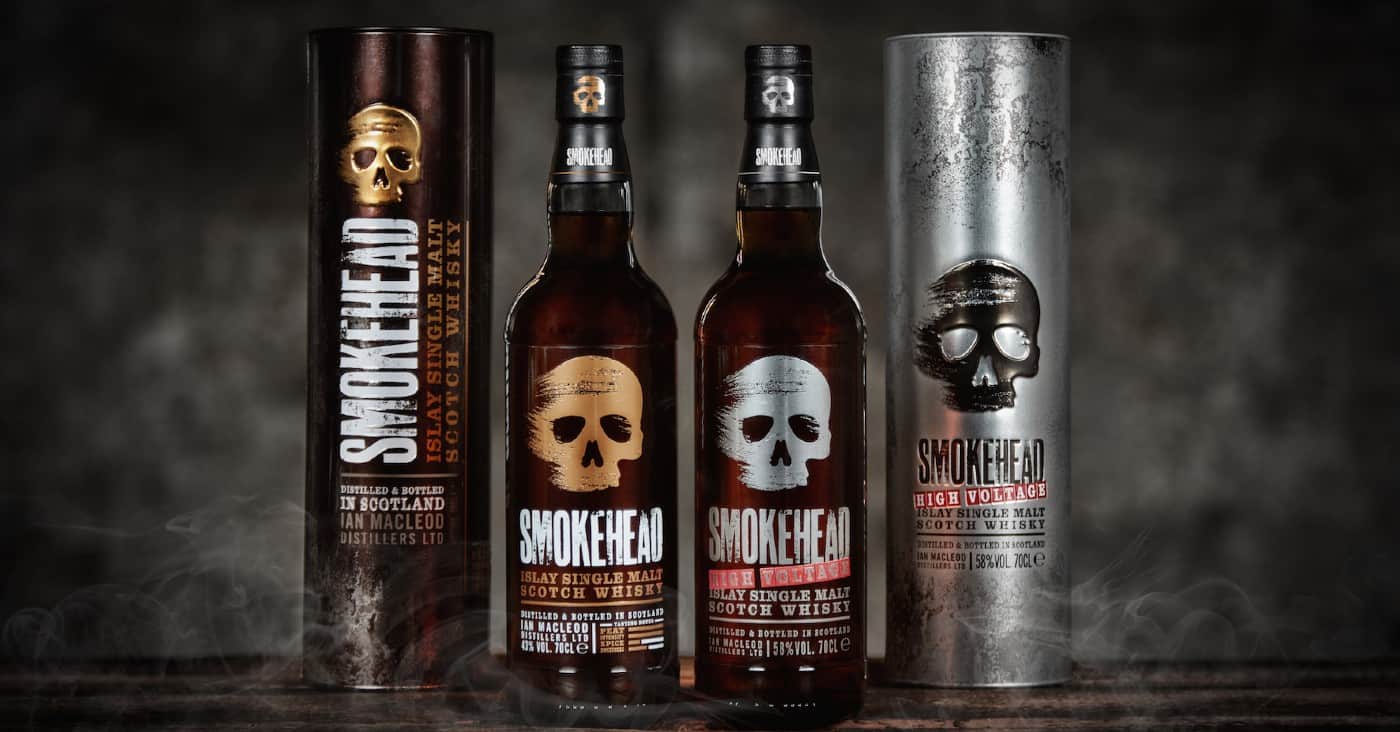 Of all the brands bottling undisclosed Islay whiskies, Smokehead has been around for quite a while. First launched in 2006, there have been a number of Smokehead releases since. One to first grab attention was the Smokehead 18 Years, which I reviewed a few years ago and is said to contain Ardbeg. That’s the only Smokehead that has received attention on this blog. So far.

Today I’ll take a closer look at three of the brands expressions, starting with the standard release, followed by Rum Rebel (a rum finished single malt) and High Voltage (bottled at a high strength).

Nose: Somewhat medicinal with notes of tar, charcoal and diesel, but also a bit funky with a touch of rubber soles and spent matches. Whispers of smoked paprika powder and preserved lemons also.
Taste: Lacks a little oomph and the mouthfeel is a bit thin. Notes of sweet barley, rubber and ashes, but also touches of grass and moss. A whiff a caramel.
Finish: Ashy, dry and medium in length.

The nose is somewhat enjoyable but it fell flat once I took the first sip. I always thought young peated whisky had a rather high floor, but not this Smokehead.

Nose: It certainly has a different profile than the standard expression. There’s comparatively subtle smoke and a whiff of smoked bacon, but also grilled pineapple, ripe bananas and tinned peaches. Finally some notes of raw sugar and charred marshmallows.
Taste: Sweet arrival with orange marmalade and some salted caramel, followed by crisp smoke and earthy peat, as well as some lively cracked black pepper. A touch of aniseed as well.
Finish: The fruits return for an encore on the palate. Grilled lemon peel and some tinned pineapple. Medium in length.

The fruity, sweet rum influence is nicely integrated with the classic Islay flavours. Job wel done and a big step up from the standard release.

Nose: Surprisingly approachable with notes of vanilla and marzipan accompanied by vegetal peat, green olives, brine and almond paste. Soft whispers of raw oak and lemon peel too.
Taste: Certainly more aggressive because of its higher ABV, but not by much considering. A sweet arrival highlighted by vanilla, quickly followed by lemon pith, but also rubber, vegetal peat and shoe polish. Touches of black pepper too.
Finish: Lingering smoke. Fairly long.

Delivers on strength but a little less on complexity. There are better high strength peated whiskies available in the same price bracket.

A bit of a mixed back. The standard Smokehead release fails to impress but the Rum Rebel is a tasty mix of sweet and peat. Just by sheer power the High Voltage has more to offer than the regular Smokehead, but it’s no high-flyer.