You might’ve heard about a new distillery in Japan that uses one of the former Karuizawa stills. It’s called Shizuoka and when I first read about them a few years ago, I was intrigued but also very skeptical. Because honestly, it reeked of a marketing ploy. Sure, pot stills play an important role in the production of single malt whisky. But this just felt like a company wanting to profit from the legend of a closed Japanese distillery.

So, I forgot about them until they released their inaugural whisky late last year, Shizuoka Prologue K. The K stands for Karuizawa, as this was wholly distilled in that mythical Karuizawa still. It aged for three years in first-fill bourbon casks and is made from 50% Japanese malt. The rest is lightly peated malt imported from the UK. From what I understand all 5000 bottles were sold exclusively in Japan. Of course, some of those bottled made it over to Europe by way of investors and speculators, but I believe none were officially exported over here.

Shizuoka Distillery was founded in 2016 by Gaiaflow, the Japanese importer of well-known brands such as Blackadder, Mackmyra and Asta Morris. In 2015 they bought a lot of distilling equipment that was previously used at Karuizawa, which was dismantled in 2015. Sadly, not much of it was salvageable. Only one of three Karuizawa stills has been put to use, the others were simply too old. The one remaining still is used as a wash still, but as mentioned before, the Shizuoka Prologue K has been fully made in the former Karuizawa still.

Nose: Malty with some gentle, earthy wood smoke and an inviting minerality. I’m not sure how it is possible that a three year old malt from Japan reminds me of Springbank. Soft notes of vanilla extract, but also some caramel-glazed apples. Touches of tobacco and menthol too, and just a whisper of apricots.
Taste: Lovely oily mouthfeel and a sweet arrival. Touches of cotton candy and burlap, as well as black pepper. The Springbank comparison holds up. Gentle, earthy smoke with some tobacco. Wet pebbles too. Finally some fruity notes (citrus) and smoked barley husks.
Finish: Long, malty and earthy.

What a surprise this is. One of the best young whiskies I’ve ever tried and a very good single malt regardless of age. Thanks so much to Roger for sharing. Pretty much ungettable at this point, but if you’d like a taste, Whiskay sells samples of the Shizuoka Prologue K. Not cheap, but there’s something to be said for getting a sip from a whisky made by a distillery that might just be a future legend.

Now how much of this tastiness can be attributed to the Karuizawa still. Not much, I suspect. But the proof is in the pudding. Later this year the second release from this Japanese distillery is expected, the Shizuoka Prologue W. In this case, the W refers to the distillery’s wood-fired still. If that release is shite, maybe that Karuizawa still is magic after all. 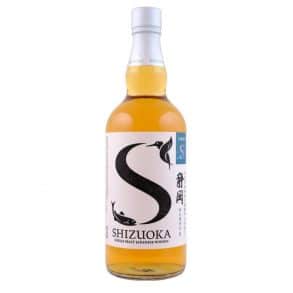 Next
Balblair 2005 (The Whisky Exchange)