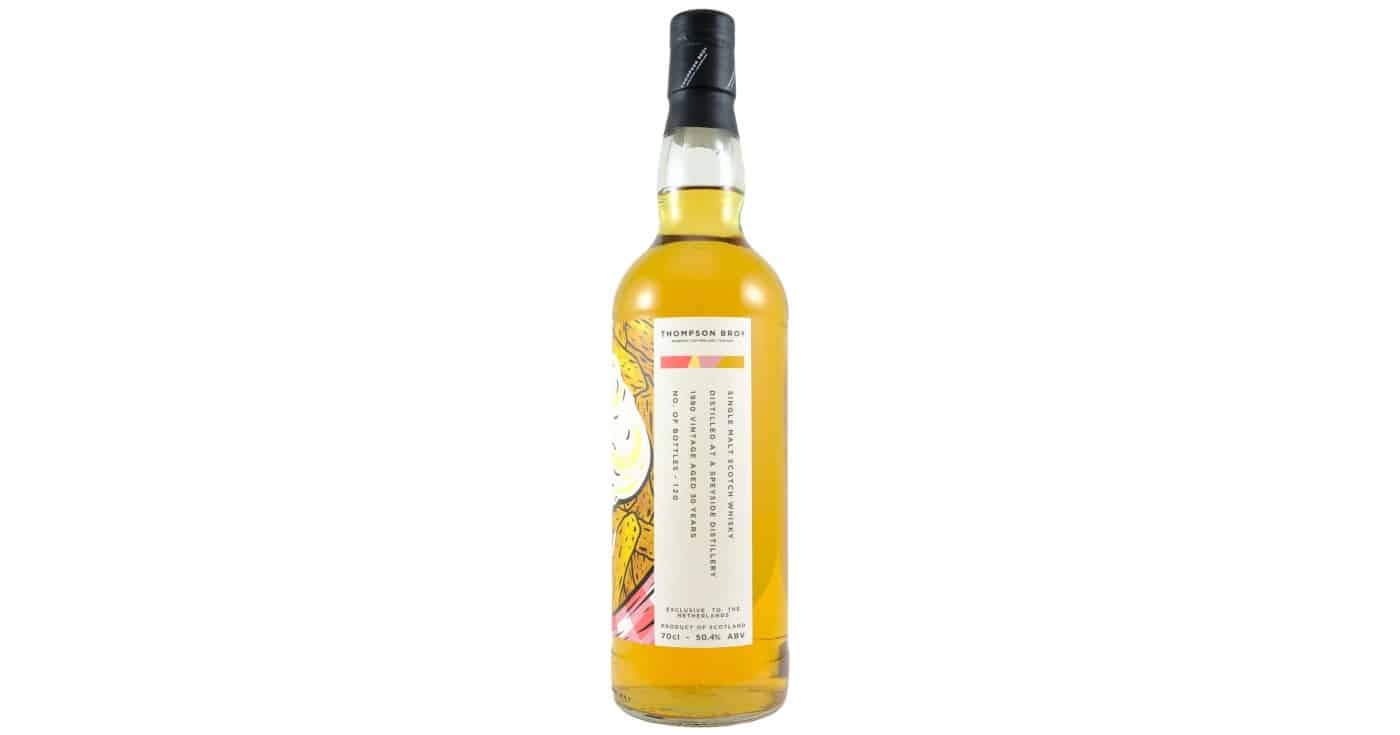 All of a sudden a bunch of releases from the Thompson Brothers started popping up in Dutch whisky webshops, including a couple of whiskies bottled exclusively for the Netherlands. One of these I’m reviewing today: a Secret Speyside 1990 30 Years from a refill American oak barrel.

Turns out the Thompson Brothers have found a new importer and distributor in the Netherlands, Whiskybase. I suspect many (if not all) of you are familiar with this database turned whisky community, specialist retailer, importer, festival organiser and independent bottler. The fit between the two is pretty much perfect; I can’t think of a better party to build the Thompson Brothers brand in the Netherlands.

If you’re not yet familiar with the Thompson Brothers, allow me to quickly introduce them. Phil and Simon are behind the Dornoch Castle Whisky Bar in the Dornoch Castle Hotel. They’ve hosted many a weary traveler and even more whisky geeks over the past two decades or so. It is one of the more renowned and best Scotch whisky bars in the world.

While the bar is still a popular destination, the brothers have also focused elsewhere in recent years. Most importantly, they’ve built their own micro distillery. Some of their stock has now aged into official whisky status, but their only official release to date is the Dornoch Distillery Cask #1. (Although I suppose the 12 bottles auctioned for COVID-19 relief in India would be the second.)

But the reason I’m writing about them today, is because of the Secret Speyside 1990 30 Years for the Netherlands (which might just be a split cask with this release). The new Dutch exclusive is part of their endeavours as independent bottlers. They started in 2016 and I’ve previously reviewed one of their earlier bottlings, as well as a more recent one. Since their beginning they’ve released everything from affordable whiskies to those more rare and exclusive. I suppose today’s whisky sits somewhere in between, mostly because the distillery isn’t disclosed.

While I usually avoid releases that don’t mention a where exactly it was distilled, the Secret Speyside whiskies from the Thompson Brothers have consistently been getting good reviews from people that I trust. Now that one has become readily available in the Netherlands, I decided to pull the trigger and bought a bottle.

I think it is a shame I’ve no idea where this whisky is made. The Thompson Brothers aren’t to blame here. They aren’t allowed to mention the name of the distillery, and probably don’t even know to begin with. And if a distillery were mentioned on the label of the Secret Speyside 1990 30 Years by the Thompson Brothers, it might just cost more than double what it does now. In a way it is sort of a give and take: less transparency, but you do get a relatively affordable 30-year-old single malt.

Nose: Kicks off with flower honey, tinned peaches and some lovely beeswax, but also some resin. There’s a whisper of chalk and crushed mint leaves, with finally a few overripe bananas, some pineapple and a sprinkle of lime.
Taste: Pretty much a continuation of the nose. Herbal, creamy and fruity. A whiff of vanilla custard and more beeswax, but also pink grapefruit, mango and sage. There is a whisper of bung cloth too, as well as resin and allspice.
Finish: Deliciously long with notes of herbs, honey and peaches.

While the Secret Speyside 1990 30 Years by The Thompson Brothers fits the definition of an older, sweeter Speyside single malt, it can't be pigeonholed either. There are herbal, oaky and spicy elements that add depth and interest to this whisky that was bottled exclusively for the Netherlands. It might just still be available at either the Whiskybase SHOP or Dramtime.