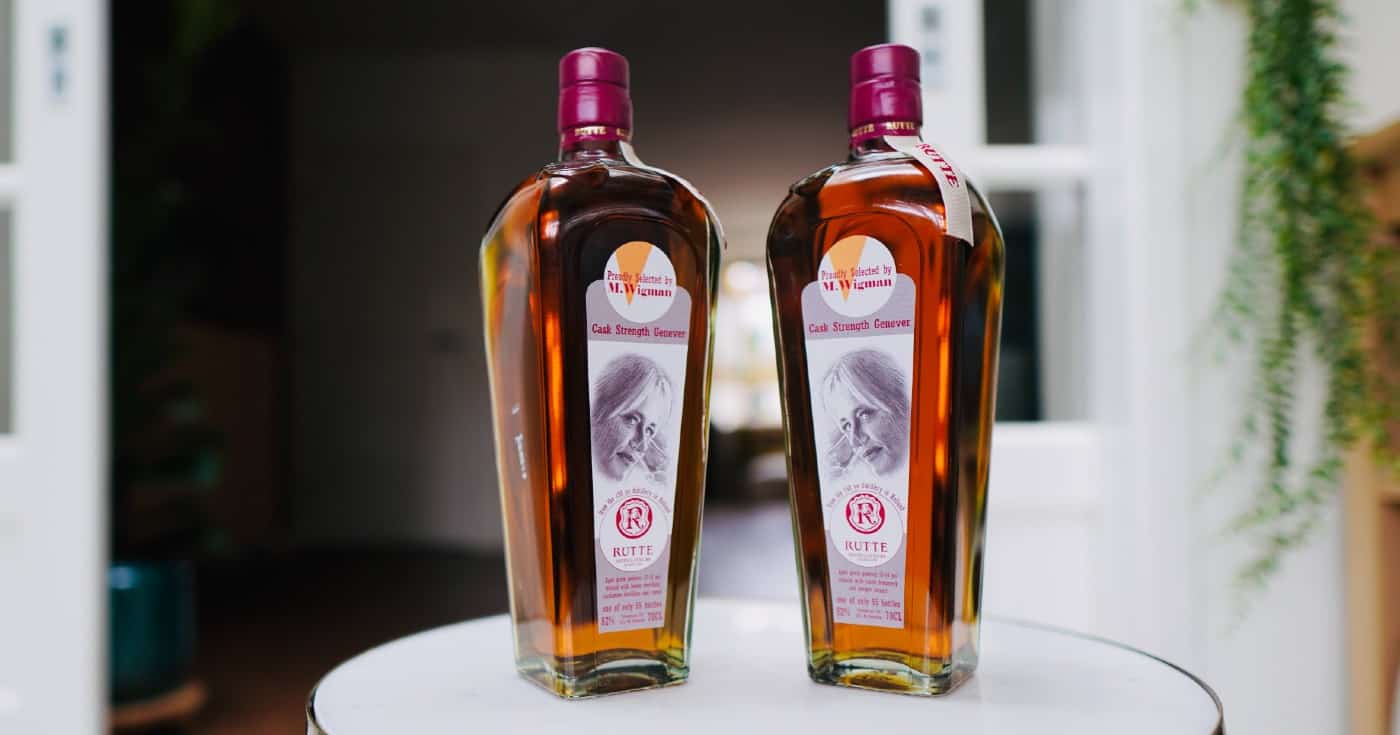 A landmark moment for Dutch genever! Why?

That’s because this is maybe the first time we’ve seen a true cross-over between the world of genever and whisky. Michiel Wigman, a respected and well-known Dutch whisky personality, selected both these Rutte Cask Strength Genevers. Most importantly, he chose to bottle them at cask strength, which I believe is a crucial part in getting whisky drinkers to come over to the genever side.

Pictured on the label is master distiller Myriam Hendrickx, who created both genevers. One more traditional with fenugreek, carob and juniper extract, the other more adventurous with lemon, cardamon and blackcurrant distillate. She also incorporated the very last amount of aged malt spirit from the era of John Rutte, the former owner and master distiller who passed away in 2003, just one month after Hendrickx started working at the company.

This malt spirit makes up 20% of the total liquid of both releases and is 14 years old. However, it had already been bottled well over a decade ago and was just sitting in Rutte’s small city centre distillery in Dordrecht. When Michiel asked if Myriam had some proper old stock that could be used for his bottlings, this is what she used. John Rutte wasn’t a great record keeper, so it is not entirely clear in what cask type this spirit matured. Chances are it was French oak.

The other parts of these Rutte Cask Strength Genevers consist of 40% single malt spirit and 40% single oat spirit, both a more modest 5 years of age. The oat spirit was so-called ‘gebeide malt wine’, which means that it already contained five botanicals – juniper, coriander, angelica, orris root and angelica seed. Maturation of both the oat and malt spirit took place in American oak.

Only 55 sets were available, and I’m glad to report they quickly sold out. If you love whisky but never tried genever before, what are you waiting for?

Nose: Very fine, very elegant. Hints of mushrooms, earthiness, beef stock and sultanas. But also freshness with pine needles, lemon thyme and juniper. A triumph.
Taste: The malt wine is more prominent. Cereal-forward, a subtle spiciness, hints of mint. If you’re into malt-forward whisky, this is worth seeking out. Also mocha, subtle coffee notes and a touch of juniper freshness and oatmeal cookies with raisins.
Finish: Long with more of the same.

Conclusion
I can’t get over how well-balanced this is. Just a superb bit of craftsmanship from master distiller Myriam Hendrickx. The botanicals, the maltwine, the cask. They all contribute in great measure.
8.9

Nose: Very floral and fruity with hints of yuzu, lemon peel and eucalyptus, but also cassis, violets and chamomile. Subtle notes of mille-feuille too. Much more like a contemporary gin then whisky.
Taste: Proper creamy mouthfeel. The citrus influence is real, accompanied by subtle spicy touches, a whiff of honey, blackcurrants and soft floral notes. Some minerals too, but overall a bit harsh maybe.
Finish: Lingering floral notes. A bit soap-y.

Conclusion
When does genever cease to be genever? This is more akin to gin and I think the botanicals may have become too dominant. In my humble opinion genever is supposed to be about a synergy between spirit and botanicals, and I'm not quite sure that's the case here.
7.7

This is not whisky. We should just get that out of the way. But it’s something complimentary and adventurous, yet traditional and with a long history. After all, genever (or botanical-led aqua vitae) has been around longer then whisky.

Having said that, I don’t believe the lemon, cardamom and blackcurrant edition will soon sway whisky drinkers to the genever category. If you’re an ardent whisky drinker you’d have to be really open-minded to explore more genevers after having tried this. It’s certainly unlike any genever I ever tried.

However, the more traditional release with carob, fenugreek and juniper extract should be able to convert some of you. I absolute adore this triumvirate of botanicals, maltwine and oak influence. One of my favourite cask aged genevers I’ve had so far.