In terms of Scottish closed distilleries, Rosebank‘s legend is probably only surpassed by Port Ellen and Brora. And the only reason might be because Diageo decided to annually push the latter two as part of their Special Releases, while Rosebank only made the occasional appearance. Now that Rosebank has been bought by Ian Macleod, the brand gets all the attention it deserves—and more.

Last month Ian Macleod launched the first global release of Rosebank under their ownership, a Rosebank 1990 30 Years nicknamed ‘Release One’. It signals the start of a journey of re-establishing the brand after an absence of nearly three decades. Sure, independent bottlers have released many casks in the last two decades, but it also became clear the well was drying up. Not many new ones have come to market recently.

And it’s not just independents that have a finite, strongly diminished stock of Rosebank; Ian Macleod doesn’t have that much left either. They were able to buy all remaining casks from Diageo, although during a recent online launch event for Dutch press, retailers and influencers, international brand ambassador Gordon Dundas declined to share how many casks exactly are left. “Not 1,000 casks, but not 10 either”, was his fashionably evasive answer. After which he added that (naturally) not all casks were of top quality either.

So, I suppose it’s a good thing that Ian Macleod has vowed to breathe live into the Rosebank distillery again. Or rather: they plan to build a new Rosebank on the same site in Falkirk as where the old distillery once stood. After Rosebank was mothballed in 1993, pretty much all equipment was either stolen (like the pot stills) or maybe sold off. Nonetheless, Ian Macleod is dead set on finally producing a spirit that’s as close as possible to the real thing.

“When we use the Rosebank name, we understand the pressure that’s attached”, Dundas explained. “So, we will be looking to produce a whisky that’s as similar as possible. It can’t be identical, because of everything that’s changed since the distillery was closed. For example, barley was different and we won’t be direct firing the stills. But it will be the same style. We’ll rebuild the stills and use the same cask types.” Then, referring to the new Rosebank 1990 30 Years, “If we can produce a Rosebank in 40 years time that tastes as good as this one, we’ll be over the moon.”

The launch of the Rosebank 1990 30 Years ‘Release One’ was a momentous occasion for its new owners. Ian Macleod and PR agency Wire came up with a marketing campaign called ‘The First Sip’. A number of whisky writers from around the globe were asked to be among the first people to try the new Rosebank, such as Felipe Schrieberg (Forbes), Alice Lascelles (Financial Times) and Martin Eber (Time for Whisky). I was humbled to be included as well. The only caveat? They wanted to film our very first sip for a launch video.

One of the reasons I said yes—besides that I loved to try the new Rosebank—was that we were given cart blanche and could say whatever we wanted. Of course I didn’t have final cut of the video (and I wouldn’t have wanted to), but I think the end result is a fair representation and I’m very pleased with it. Also, the whisky was utterly delicious, so there was no pressure at all to pretend, because I actually was drinking a classic.

At first glance, Rosebank produces a traditional triple-distilled Lowland whisky, resulting in a high new make strength (like Auchentoshan does). There’s plenty of copper contact during distillation, which leads to a lighter style spirit. But the condensation in classic worm tubs adds a weightiness to the whisky, much like the meaty style of Craigellachie. That’s in large part what makes Rosebank different from other triple distilled whiskies.

Rosebank was always spirit-led. You won’t soon find a heavily-sherried release, as pretty much everything was filled into refill casks. The Rosebank 1990 30 Years ‘Release One’ is made up of 62% refill sherry butts and 38% refill bourbon hogsheads.

Nose: Such a gentle, yet rich and lively malt. It’s the vibrant citrus note that stands out, with the loveliest of orange zest, but also some watermelon, apple skin and notes of peach and nectarine. Finally some grapefruit. Then there’s touches of sweet pastry, buttery Chardonnay and maybe even some charred oak in the background.
Taste: Creamy, buttery, fruity and a gentle spiciness. Elegant fruits like nectarines, ripe apples and apricots but also candied almonds. Even a touch of smoke, although very much hidden and in the background. Finally some Port-stewed pears, cinnamon, cloves and oranges.
Finish: Lingering fruits and soft spices. Medium in length.

As elegant a nose as you'll probably ever encounter on a single malt, with a more vibrant and present palate. The mixture between bourbon and sherry casks is spot on. This is a style of whisky that currently just isn't made.

Only 4,350 bottles are available worldwide and they're priced at 1,600 pounds. That's a lot of money and not something I would ever pay for a bottle of whisky—but it also seems like a fair price in today's market. If you've the spare money lying around, you won't be disappointed.

Below you’ll find some behind the scenes photos of my shoot as a bonus (probably more for me than for you). 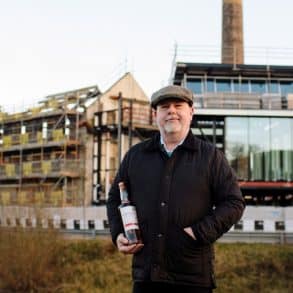