Since 1987, the Oregon-based brewer Rogue has been producing some quality beers. And like many brewers before them, they figured: ‘If we ferment grains to make beer, then why wouldn’t we be able to also make a decent whisky?’

I mean, I get why you would think that, but distilling spirits is something completely different. Just because you’re good a making beer and understand in detail how fermentation works, that doesn’t mean instant succes when you try your hand at something else.

Just take a look at Duvel, a well-known Belgian beer maker. Their beers are admittedly excellent, but their Moortgat whisky is a disaster, receiving nothing but disapproving reviews. Strangely enough, the bottles have become quite the collector’s items.

So onto Dead Guy Whiskey, which is distilled from the same three grains as Rogue’s Dead Guy Ale: 2 Row, Maier Munich, and C15 malts. The wash ferments for approximately seven days, before being distilled twice in copper pot stills. Dead Guy Whiskey is then aged in new American oak barrels for a minimum of two years.

Nose: Sweet banana with caramel, oak and subtle raisin notes. A hint of coconut, as well as touches of Demerara sugar and cherry marmelade. Balanced, decent stuff.
Taste: Quite a bit of oak shavings, with gentle fudge notes and some subtle milk chocolate, as well as sugar icing. A tad grainy and slightly bitter.
Finish: Lingering oak-y bitterness. Short to medium in length.

Easy drinking, decent whiskey. On the sweeter side of the spectrum, and certainly not bad at all. I wouldn’t go on an all-out search for a bottle, but wouldn’t say no either if someone pours me dram. 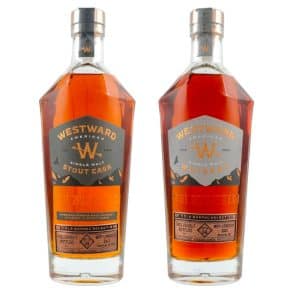