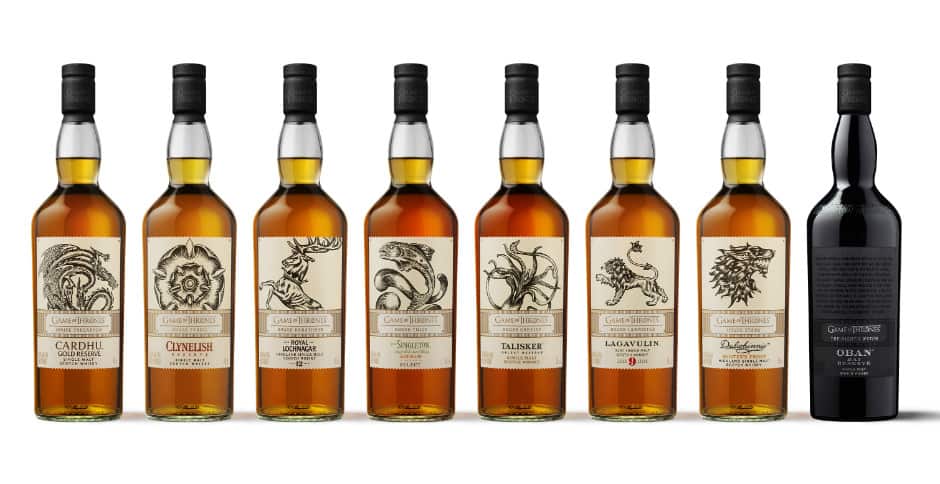 Unless you’ve been living under a rock, you must’ve heard of Game of Thrones, and by now probably also of the collection of Game of Thrones themed single malt whiskies. Eight different distilleries, paired with the seven Great Houses of Westeros, as well as with the Night’s Watch.

Most of the whiskies are new vattings, and therefore somewhat exciting. We don’t often get new official releases from Clynelish or say, Oban. So I’m certainly curious to see what the blending team at Diageo have come up with.

However, in the case of Cardhu and Royal Lochnagar, it is just a matter of the same whisky, but with a different label. While the Lochnagar is priced the same wether you buy the regular or the Game of Thrones edition, the Cardhu will be about 20 percent more expensive. I guess people will buy it regardless, but it seems worth mentioning, right?

Okay, let’s continue with what you’re here for: tasting notes. Instead of spreading my reviews out over a few weeks (which is what would happen with my regular three-posts-a-week schedule), I’ve decided to dump them on you all at once. Enjoy!

Nose: Distinct notes of overripe apple and pear skin, as well as a touch of honey, and fresh peaches, with a tad too much vanilla. Pretty classic Dalwhinnie, although not on the same level as the 15-year-old.
Taste: Slightly resinous, with a fair amount of nuttiness and soft spices (crack black pepper corns). Where’s the fruit? There’s really only some bitter lemon peel, not much else.
Finish: Pretty short, with a hint of ginger.

Nose: Overripe red apple parts, with hints of fudge, and a touch of heather and straw. A whiff of milk chocolate and mint maybe. Slightly flat, with a dirty edge.
Taste: Plenty of caramel, vanilla and a whiff of brown sugar, with a hint of char and bitter oak, as well as cloves. Quite watery.
Finish: Lingering spices. Medium in length.

Nose: A gentle sweetness, with plenty of vanilla and toffee, as well as red apple peel and a whiff of orange juice. Finally a touch of marzipan as well. Candy-esque almost. Too sweet?
Taste: Fairly creamy, with hints of toasted oak, caramel and sweet sugary barley water. It has a spicy layer as well, like cinnamon and black pepper. A hint of menthol too.
Finish: Lingering spices, then apples. Pretty short.

Nose: Herbal peat and decaying veggies, with a touch of wood smoke, rubber and plastic. There’s a hint of peach and nectarine, as well as underripe banana. Good balance.
Taste: Geez, this is oily! A hit of rubber, smoked meat and peat, along with a pronounced sweetness. Marshmallows and sweet berries. Also a spicy touch. Nutmeg, cloves.
Finish: Lingering peat smoke and char. Long.

Nose: A hint of dried tea and fresh tobacco, as well as shoe polish. Soft notes of dry sherry, raspberry and maraschino cherries. Getting fruitier with time, and there’s a touch of candle wax too.
Taste: Not very complex at all. Quite malty, with whiffs of cloves, but also black berries, dark caramel and some damp wood. A tad dry.
Finish: Lingering spices with a hint of caramel sweetness. Medium in length.

Nose: Hints of grass and lemon zest, and whiffs of candied oranges. There’s a touch of galia melon too. Simple, yet fairly pleasant.
Taste: Surprisingly earthy and with a burst of dry oak, it also displays soft notes of pineapple and lemon yoghurt. Slightly herbal with hints of basil. Again, not overly complex, but enjoyable.
Finish: Short to medium in length with a hint of vanilla.

Nose: Pretty mineral with a touch of candle wax. Whispers of nougat too, as well as banana candy and a faint note of crisp green apple and mango.
Taste: Waxy, with quite an aggressive arrival (white pepper). Hints of honey, sultanas and white grapes too. A whisper of chalk and vanilla.
Finish: Lingering beeswax, and a peppery hit. Medium in length.

I wouldn’t call them standouts per se—although I guess they are in this lineup—yet the Lagavulin and Clynelish are my clear favourites here. They simply display the most character, and are the two whiskies that I could understand someone buying just for the liquid inside, instead of for the marketing gimmick.

While the Talisker is undoubtedly a fine whisky, you’d be much better off with the regular 10-year-old. I found the Oban disappointing (in part due to my own expectations), while the rest of this series ranges from average to subpar.

Finally, Maarten, thanks so much for setting up this bottle share! It was great being able to try all these whiskies without having to shell out for the entire set.