This is the first in a series of very special reviews. The next couple of weeks will be all about extremely rare whisky from the lost Dublin distilleries of Bow Street and John’s Lane. We’ll kick things of with a Redbreast 12 Years Old, bottled in the early 1980s, and distilled in the late 1960s.

Before we start, I have to thank someone for providing me with all this amazing whisky. I first met Martin during an awesome sailing trip in 2014. About five minutes after we first shook hands, he poured me a Glen Albyn. That really says it all. If there’s anyone more willing to share whisky, I’ve yet to encounter that person. Last year Martin immersed himself into Irish pot still whiskey, buying a lot of old bottlings in the process. He was kind enough to save some of that whiskey for me to review on this blog. Thanks so much!

Martin wrote an awesome and extremely informative Dutch article for De Kiln, the magazine of the Usquebaugh Society. Most of the information I’ll be using for my posts over the next few weeks will come from that article, so I’d also like to credit him for doing a lot of research on Irish whiskey and its lost distilleries.

Once upon a time Ireland ruled the world of whiskey. In the second half of the 19th century Irish pot still whiskey was only surpassed in popularity in the United Kingdom by rum (as far as spirit drinks go). It was also enormously popular in the United States. For every case of Scotch, three cases of Irish whiskey were sold.

Pot still whiskey is a whiskey distilled from both malted and unmalted barley, a process that is distinctively Irish. Because of the relatively low malted barley content, the mashing used to take a lot longer than was usual for Scottish single malt. It was also done at a lower temperature. Not only barley was used for pot still whiskey. Wheat, rye and oat also used to be part of the mash bill. Not anymore though.

Dublin used to be a hub of whiskey activity, with John’s Lane Distillery and Bow Street Distillery being two of the most prominent producers. Because the Irish didn’t want to compromise on quality and dismissed the Coffey Still, they missed out on the commercial succes of blended whisky. The Easter Uprising in 1916 and the subsequent independence had a negative effect on the amount of Irish whiskey sold in England.

Add to that the prohibition in the United States and the temperance movement gaining popularity, and you have the recipe that eventually caused the downfall of the Irish whiskey industry. As a final emergency measure John’s Lane, Bow Street and Cork Distilleries decided to band together, forming the Irish Distillers Group. In 1975 all whiskey production was moved to the New Midleton Distillery in Cork. Bushmills was still active in Northern Ireland, but that was it. From that moment on the Emerald Isle only had two distilleries left.

Irish pot still whiskey distilled before 1975, in one of the pre-New Midleton distilleries, consequently became very rare. Nowadays bottles fetch many hundreds, sometimes thousands of pounds in auction. The Redbreast I’m reviewing today represents one of the last batches ever distilled at Bow Street Distillery.

When Alfred Barnard visited the distillery in the late 1800s for The Distilleries of The United Kingdorm, Bow Street had two wash stills of 112.000 liters and two spirit stills of 73.000 liters. Insane! Yearly production was around 5,5 million liters. Nowadays the buildings in Dublin have been converted to a state of the art visitor centre.

Nose: Sweet dried fruits with a good amount of candle wax. There’s a veneer of wood glue, varnish and gasoline too.
Taste: Again sweet fruits, mandarines and ripe nectarine, but also some fudge and sultanas. That’s quickly followed by cough syrup, plastic and diesel. Mild spices. Phew, not for the fainthearted.
Finish: More of the same, funky stuff. After a while returns to soft notes of red fruit.

This is something else alright. Hard for me to rate this Redbreast, because I can’t really compare it to anything modern. I do like off-beat stuff (from time to time), but I wouldn’t call this particularly balanced. Still, this does get a thumbs up. 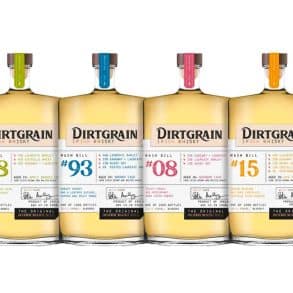