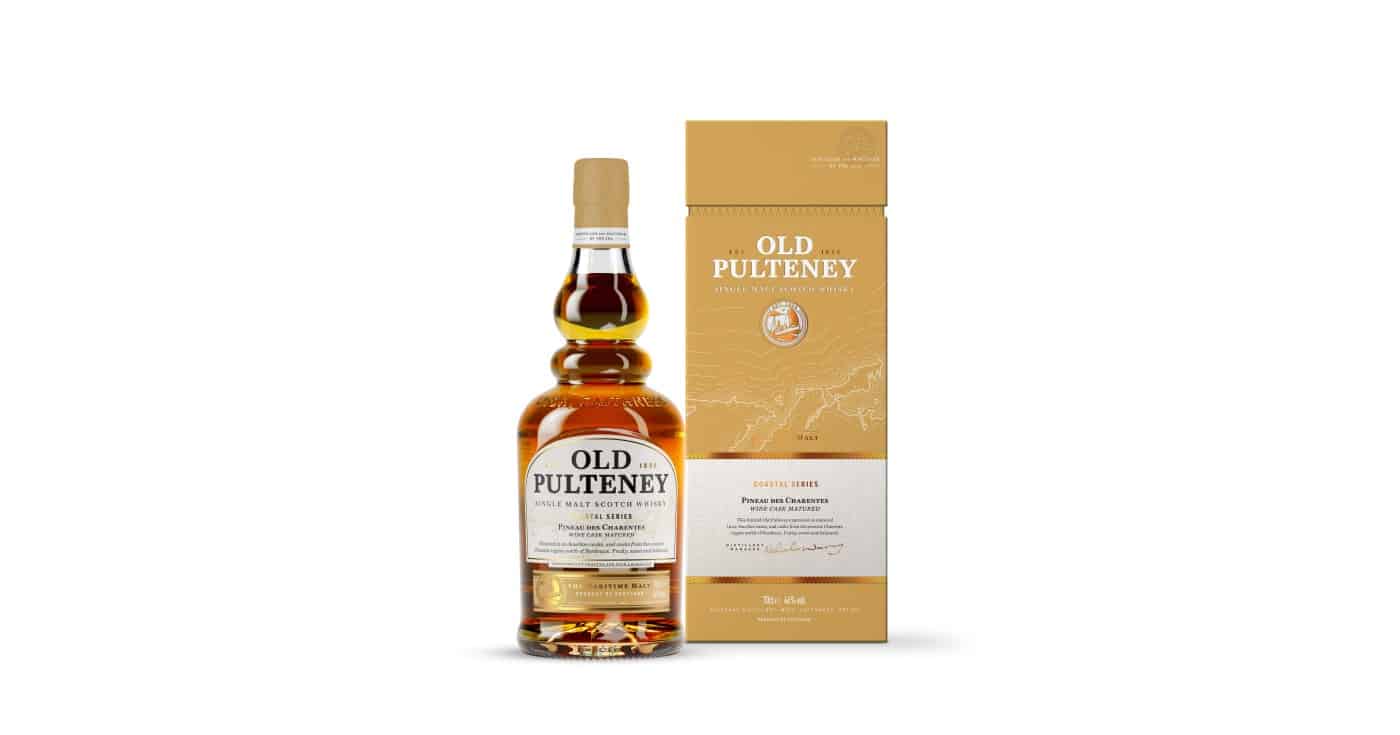 I’ve never made a secret out of my fondness for Old Pulteney, and I quite like that they’re not the most dynamic of distilleries – as in not releasing something new every month. However, it’s good to feed the soul every once in a while with a new expression, so the Old Pulteney Pineau des Charentes, part of the distillery’s new Coastal Series, is a very welcome release.

Old Pulteney’s maritime identity led them to launch The Coastal Series. They’ve partnered with drinks makers from coastal locations across the world. This first partnership led Old Pulteney to Charente-Maritime, which is part of the Cognac producing region, but also home of Pineau des Charentes; an aperitif that’s the result of blending Cognac and grape juice before ageing in casks.

“It’s a soft, complex whisky that has a story to tell,” says Waring. “Pulteney is coastal, just as Pineau in the southwest of France on the Bay of Biscay. This project was about the balance of it. The synergy between the two places, they complement each other. It’s been very interesting how it’s come together.”

You mentioned this whisky has a story to tell. What story would that be?

“It’s about highlighting where we are, the northeast coast of Scotland. We’re rugged, windswept. It’s cold and damp. We don’t see an awful lot of daylight when the weather comes in. It gets dark very quickly. It’s a fishing place. Hard living. And then you go to the southwest of France where you have the warm, cool Savannah breeze coming in.”

What’s the maturation process been like for the Old Pulteney Pineau des Charentes?

“This Pulteney began life in refill American oak. The spirit that we make is big, beefy, full-bodied and aromatic. The refill oak adds the butterscotch and coconut, a lot of citrus-y notes as well. We then put it into 400-litre ex-Pineau des Charentes casks from French oak. It brings a different dimension to it. Our characteristic brininess is made a lot softer and more mellow. I find that you get peaches, apricots; the citrus is more of a candied orange. The two cask types complement each other. It’s not that one style is highlighted over the other.”

Pulteney has been mostly traditional in the types of casks they use. This is a deviation.

“It is a venture for us. Outwith the norm and outwith the core of Pulteney. We’re more than happy with the core range but we wanted to do something slightly different. The Coastal Series just fits that bill absolutely perfect.”

How much extra time has the Old Pulteney Pineau des Charentes spent in the Pineau casks, roughly?

“It was not a time thing. The whisky told us when it was ready, so to speak.”

And when did it tell you it was ready?

“Haha, it’s a cliché but it is true. We’re happy with it. Who knows what it would’ve been like with an extra six or nine months, or a year even. Who knows. But we are more than happy with the way the whisky is.”

How closely did you have to monitor the casks. Was there an immediate influence?

“Oh no, it takes time. You can’t put it in on Monday and check it on Friday. The Pulteney whisky was at a stage that we were happy with it. We were very happy with the Pineau des Charentes casks that we got. Then we put it in the dunnage warehouse and I left it there for a while. It just takes time. After a wee while I started looking at it. With quite a bit of interest as well. It was interesting to see how it progressed. And it wasn’t just me. There’s a few of us that were happy with the way the whisky was.”

What went into the sourcing of those Pineau des Charentes casks?

“We were aware of Pineau des Charentes and the area. When we nosed the empty casks we figured it was quite a good fit. We worked with a local Tonnellerie to source the casks. It just all seemed to fit. Some things you do can be quite protracted with a lot of input, but this came together quite easily. And the whisky has come out absolutely ideal too.”

I imagine that’s not always the case.

“Not everything works the first time. Sometimes the wheels come off and you have to fix it. This is one of the ones where it all fit into place effortlessly. A great thing to be involved with, as is the whole Coastal Series.”

The press release mentions “casks breathing in the North Sea air.” Do all Old Pulteney casks actually mature at the distillery?

“The ones destined for single malt, yes.”

What makes Pulteney a maritime malt then. Or better yet, what explains the salty, briny edge the single malt has?

“I look out the window here and the sea is maybe 150 yards that way. It does have a huge influence. When you go around [Wick], it’s there all the time. I had some visitors and they asked that same question. The easiest way to find an answer is to go through the town with your senses and experience it. The maritime identity is in the town’s DNA. You can’t escape it. When you go live in-land you’ll get different aromas. But for us it is the coast. The sea is a big, powerful body that has a great influence. It has shaped the town, this place, and the people over generations. And it also shapes the whisky.”

Is the coastal element added after distillation and during maturation, or is the maritime influence already infused in the earlier stages of production?

“For me, all the work is done during maturation. That’s where it all comes from. We use Scottish barley malted in Inverness. All from Aberdeenshire or Morayshire. It’s not many road miles away at all. But the coastal, briny influence is all about our maturation. It’s the same with the Pineau des Charentes. It’s all about the locality and maturation on the coast there as well, but in a different way. They’re not as rugged and windswept, but more of a warmer climate than we are. That adds a different dimension.”

Nose: Not the most expressive at first, but it opens up on mineral notes (think ozone and wet pebbles), walnuts, and some chalk, but with apricot marmalade, sultanas and orange zest to back things up. Finally hints of rose petals and a pinch of cinnamon. It also becomes sweeter over time with honey leading the way.
Taste: Mouthfeel works well with a nice viscosity. Hints of honey, cracked black peppercorns and a pinch of salt followed by dark caramel, burnt toast and caramelised almonds. Near the end some breakfast tea with rock candy.
Finish: The sweetness slowly expands. Fudge, dark caramel and honey intertwine. Lingering notes of salted peanuts.

Is it the Pulteney I know and love? No. Is it a good whisky? Absolutely. There's a balance here that really works, the nose shows a higher complexity than usual and the sweetness on the palate adds a new layer. It's accessible without being boring. Delicate at times. Despite it being part of the Coastal Series, oddly enough I find the Old Pulteney Pineau des Charentes less coastal then their usual offerings, but the Pineau des Charentes casks have been used with integrity, not dominating the spirit entirely.

Available now from a number of specialist retailers, including The Whisky Exchange.