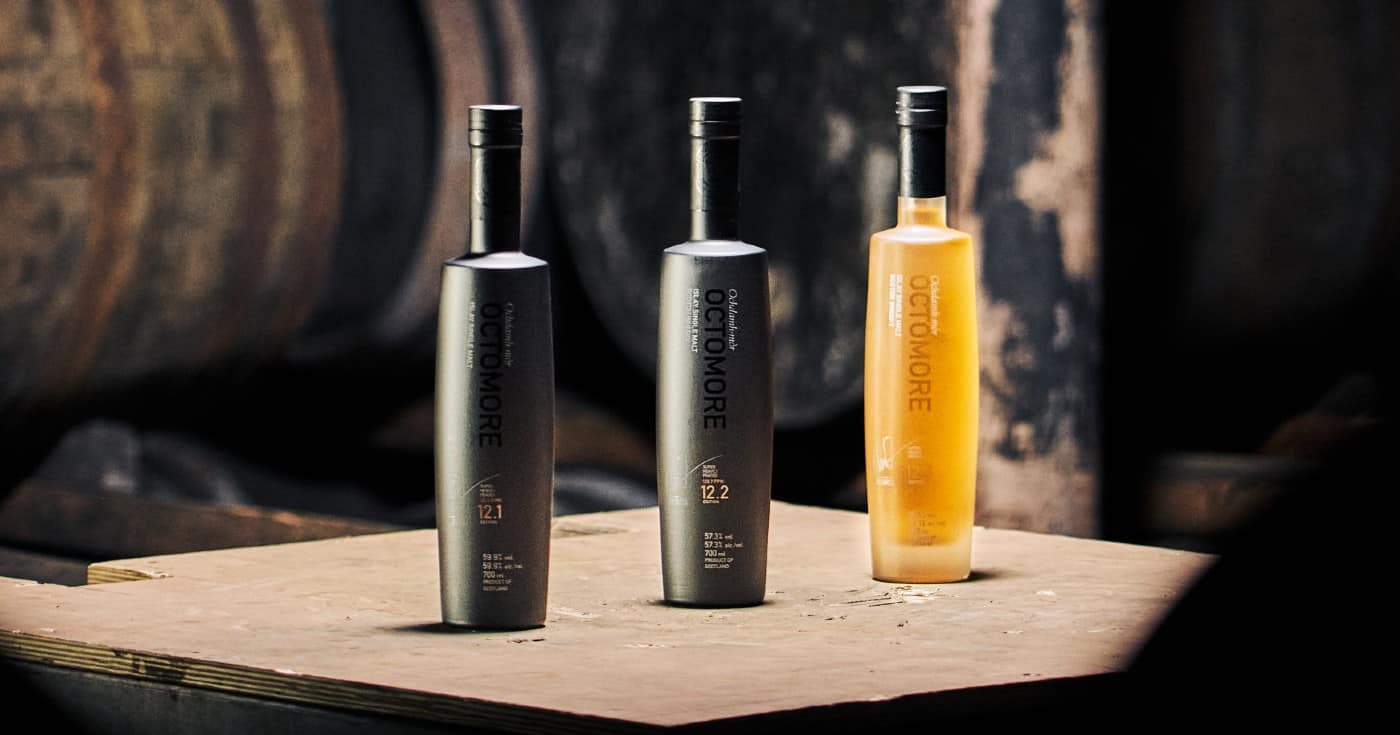 Can I be totally honest with you? Octomore is not what I enjoy drinking in my personal time. That’s on me, not Octomore. When I have my choice I’ll rarely go for a heavily peated single malt. However, I’m a curious whisky drinker. That’s why I’m really looking forward to reviewing the new Octomore 12.1, 12.2 and 12.3.

Quick warning: what I’m about to write may reek of snobbishness. And I hate whisky snobbery. Don’t consider myself one either. People should enjoy their whisky whichever way they want. Mostly, they should enjoy whatever whisky they want. However, that doesn’t mean I personally always get it.

They’re devotees to the peat. Just as there are worshippers of sherry.

There was a time where I thought the Ardbeg Ten was the second coming. Or that a Kavalan Solist Sherry Cask was the bees knees. Big whiskies with big flavours. They’re like a knockout punch that you only awake from the next morning, but you still have that aftertaste of an absolute brutal flavour experience in your mouth. Subtle they are not.

And subtlety is what I’m always looking for in whisky. The more the better. In my experience it allows for larger complexity and more variety. Subtlety never becomes dull. Big flavours though? After that initial shock and awe, yes, they can become tedious.

But not everybody feels that way. I know plenty of whisky drinkers that’ll take a bottle of Octomore to their grave. They’re devotees to the peat. Just as there are worshippers of sherry. To me, that sounds boring. To you it might sound like heaven.

My palate sometimes has difficulty getting to the organoleptics behind heavy peat smoke flavours. Not my best friend though. He drinks mostly heavily peated whisky, and he often barely notices the peat smoke anymore. Is that how my palate would’ve developed had I been drinking more (or only) smoky whisky? Or maybe that’s just a case of genetics.

That’s not to say there aren’t heavily peated whiskies I enjoy on a personal level, let alone those I can appreciate for their quality. Octomore is certainly among the latter. Sometimes even among the former. Because contrary to first impressions and its reputation, Octomore is about much more than just high phenol levels.

Nose: A hit of vanilla and lemon zest followed by fermented mash, smoked barley husks, peanut skins and light floral notes. Whiffs of mown hay, a touch of pineapple and coconut as well. The peat is part of the supporting cast, certainly not the lead actor.
Taste: Nice thick, oily mouthfeel. Arrives on white pepper, creosote and touches of seaweed, accompanied by a whiff of iodine. Smokier than the nose suggests, but that’s often the case with these. Finally some charred lemon peel.
Finish: Somewhat mossy, herbal and a whiff of pineapple. Lingering leafy smoke.

Conclusion
A naked Octomore without much frills. Enough smoke to keep the peat heads satisfied, but plenty of other aromas and flavours as well.
8.5

Nose: Initially some white chocolate quickly followed by honeyed breakfast cereals, tinned pineapple and a few drops of triple sec. The earthy peat smoke and notes of charred beef are subtle. Balanced almost to perfection.
Taste: A sweet arrival complementing the sticky, oily mouthfeel. Good amount of white pepper accompanied by honey and stone fruits like nectarines, but also smoked oysters and earthy peat smoke. The touch of aniseed is refreshing.
Finish: Whiff of olive brine and a decent pinch of salt. Pickled lemons as well. Lingering notes of charcoal.

Conclusion
With a sweeter profile, the Octomore 12.2 offers extra layers of depth and interest.
8.8

Nose: Subtle hints of Demerara sugar, figs and dates, but also sweet grape skins. Whispers of kumquat, orange zest and sweet tobacco, followed by charcoal briquettes, smoked paprika powder and sauerkraut. Highly attractive.
Taste: Maybe even oilier than the previous other Twelves, it arrives on sweet notes of processed sugar, quickly followed by barbecued meat and earthy peat smoke. Then the rich flavours of fudge, chocolate malt and tobacco leaves come in. It’s all finished by a sprinkle of cracked black peppercorns and some burnt toast.
Finish: Fruits like plums and figs, but also some lingering spices.

Conclusion
The spirit stands up to it, but the Pedro Ximénez influence is very much noticeable and the Octomore 12.3 is more profound for it.
8.9

Tasting the three new Octomore 12 alongside one another is a great exercise in cask influence. The .1 is somewhat raw and naked, which might be the style you prefer most. I’m personally more enamored by the .2 and .3, each of which is enhanced by either the Sauternes or Pedro Ximénez influence. Whichever one of these you end up buying: there’s plenty of subtlety beyond the smoke.

Next
GlenDronach Is A Lot Older Than The Label Says