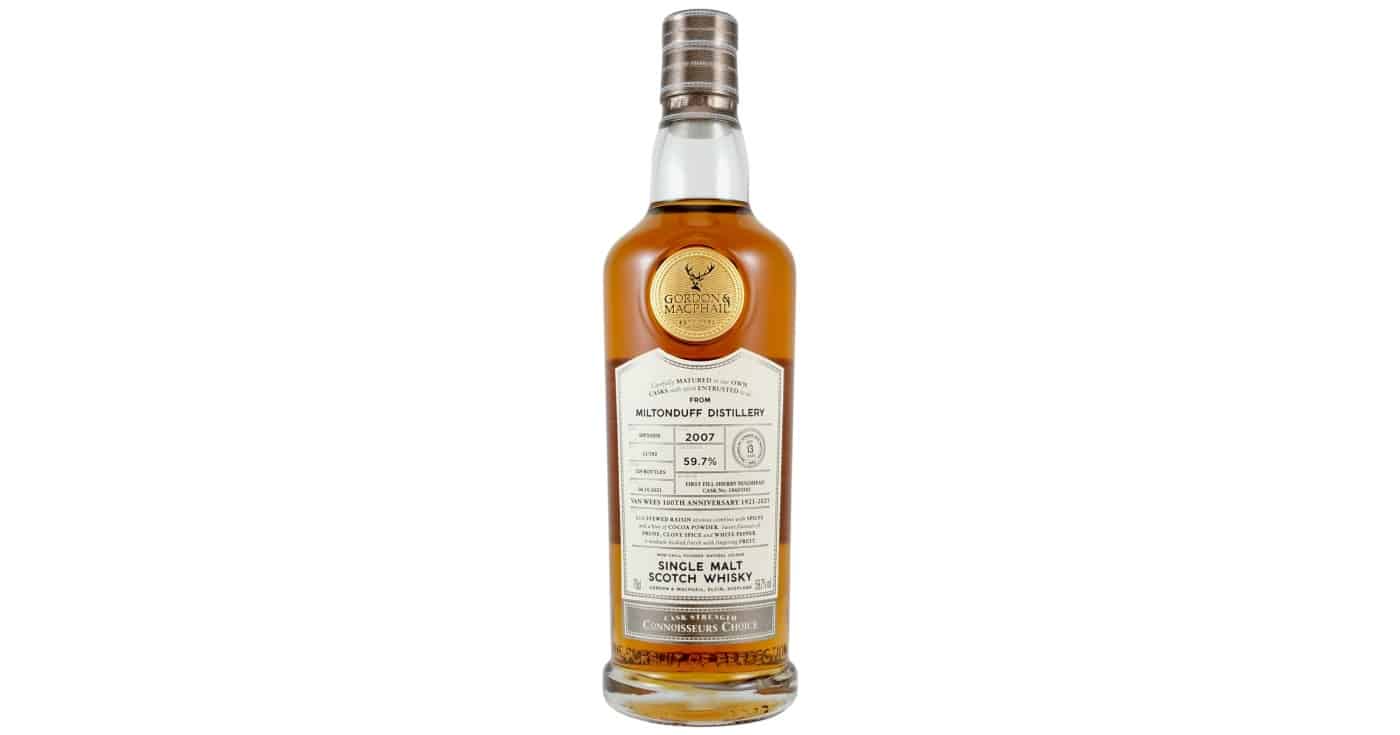 Continuing our celebration of Van Wees’ 100th Anniversary, we’ve arrived at the most obscure distillery in this Dutch importer’s centenary line-up. After single casks from Benromach and Strathisla (and a Glenfarclas coming up tomorrow), this Miltonduff 2007 13 Years by Gordon & MacPhail is easily the least recognisable name.

But it is in picking these kinds of casks that lies the greatest difficulty from a commercial standpoint. Name brands like Macallan, Ardbeg or Springbank will sell almost regardless of quality. That’s thanks in large part because these distilleries have proven themselves over and over again. Some have been upholding their reputation for many decades, others are coasting on their name, but they’re a commercial certainty regardless.

In picking a Miltonduff the Van Wees tasting panel shows courage. Even though this distillery has been gaining some traction amongst whisky connoisseurs, Miltonduff is far from a household name. There aren’t many people that’ll blindly pay money for a bottle of Miltonduff, neither whisky drinkers nor investors. So, you better make sure you pick a good cask, otherwise this Miltonduff 2007 13 Years will stay on the shelves for a long time.

Miltonduff is a curious distillery that has been around for almost two centuries, yet it has never broken through as a single malt presence. That’s likely very intentional as most of the distillery’s output is used for successful blends, namely Ballantine’s. But still, I find it interesting that such a big distillery (an annual capacity of 5.8 million litres of alcohol) remains under the radar, despite the fact that plenty of independent bottlers manage to find proper casks.

Maybe this Miltonduff 2007 13 Years for Van Wees’ 100th Anniversary will nudge the distillery’s name just a little higher on the list of (Dutch) whisky drinkers. After all, it comes from the warehouses of Gordon & MacPhail and was chosen by the Van Wees family.

Nose: Bright orange zest which quickly evolves into notes of allspice and lemon yoghurt, as well as a subtle note of prunes and speculoos. There’s a good amount of raisins here too. Finally some sweet peaches and blackberries.
Taste: A drying mouthfeel with some spicy pepper, but also aniseed, some very dark caramel and cloves. Then some dried figs and burnt toast, while ending on bitter chocolate.
Finish: Digestive biscuits, vanilla and baked bananas. Long.

Conclusion
While there's not much differentiation in score between this Miltonduff 2007 13 Years and yesterday's Strathisla, they're certainly very different. This Miltonduff is the more adventurous pick and might not appeal to as wide an audience as the Strathisla, but that's probably why you should at least try it. Another good pick for Van Wees' 100th Anniversary.
8.7