It’s not every day that you get the chance to attend a masterclass hosted by Frank McHardy, the legendary former distillery manager from Springbank. But the people from Best of Whiskies managed to lure him to Amsterdam. And with him McHardy brought a total of nine whiskies, most of ‘em no longer available in stores, but we’ll get to that later.

Nepotism
McHardy started working in the whisky industry in 1963 at Invergordon distillery. It was a prime example of nepotism. “My dad was the personnel officer, and that’s how I got the job”, he tells his audience. It’s safe to say that working in the industry wasn’t a life long dream. “I wasn’t even really interested in whisky at that time.” 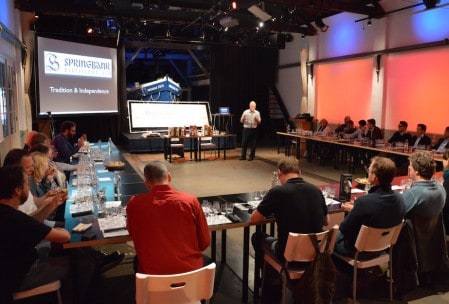 But it wasn’t long before the whisky bug got a hold of him. After three years he switched to Tamnavulin, which is where he learned a hell of a lot. “I was doing everything there. From coopering, to mashing, to distilling. It was a great grounding. Nowadays you can get a Brewing & Distilling degree at Heriot-Watt University, which is fine, but I believe there’s no better way to learn the process than by working in a distillery and doing everything.”

‘That’s just how we do it’
After four years at Bruichladdich, he landed his first job as distillery manager at Springbank. He fell in love with it. It is still his favourite distillery. He did leave for Bushmills for almost a decade, but returned in 1996. I know Springbank as a wonderfully traditional distillery, and McHardy only confirmed this by some of the stories he told during the tasting. Why for example, do they use the famous 2,5 distillation at Springbank? Does McHardy know? 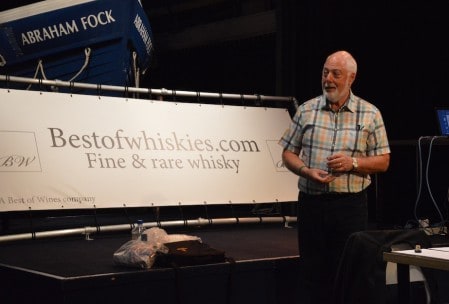 “No, it’s just how we’ve always done it. Is there a record of when we started doing this? No. We just know it’s always been done this way. And it’s hard to change a thing if you’ve been doing it for a long time, because you’re afraid to change the characteristics of the spirit.”

And that Springbank spirit is lighter than the traditional spirit produced by most Campbeltown distilleries back in the early 20th century, when there were still dozens. McHardy: “Our 2,5 distillation is probably what saved us from extinction. At one point there wasn’t much demand for the heavy, oily spirit produced by other Campbeltown distilleries. Which is part of the reason they all closed in the twenties.”

Nerd season
This tasting was one for whisky nerds. Or I should say, became one for whisky nerds. Frank’s story was accessible, even for people who don’t consider themselves connoisseurs. But as Frank was very open to questions, everybody was able to squeeze in a question or two (or three or four). Like why is the wash only 4,5 percent? Or could you please tell us the story about the stills of Glengyle again? All the while tasting some wonderfully delicious whisky from Springbank and Glengyle. 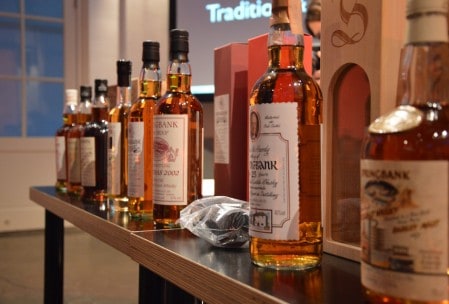 So let’s dive into the whisky we tasted. I made some notes, but not very extensive ones. And I didn’t rate them. It wasn’t the time or the place for in-depth analysis. It was a time to enjoy whisky. And enjoy I did 🙂

Kilkerran 9yo Open Day 2015 (58,3%, OB, Rum Cask)
Spicy with nutmeg and cinnamon. Some sweetness, but not as much as I’m used to from a rum matured whisky.

Springbank 12yo 100 Proof Christmas 2002 (57%, OB, 66 bts.)
A special Christmas bottling for shareholders, directors and staff of Springbank. I liked this a lot. What I’ll say is this: it is exactly what you’d expect from a Christmas-style whisky from Springbank.

Hazelburn 8yo Sauternes Wood (55,9%, OB, 2011)
This one has matured for an extra three years in an ex-Sauternes cask. Brambles and plums, very sweet. And it gets sweeter over time.

Longrow 10yo Tokaji Wood (55,6%, OB, 2005)
Easily the least favourite among participants, although I found it to be more than okay. Sweet and sugary with a sour edge. Barely any peat on the nose and palate, but just enough to leave a nice impression.

Longrow Red 12yo (52,9%, OB, 2015)
Finished for one year in Pinot Noir-casks from New Zealand. Brambles and burnt wood, with caramel and toffee. A briny and peaty finish.

Springbank 25yo (46%, OB, ‘Frank McHardy 40 Years In Distilling’)
A very rare and special whisky, bottled to celebrate McHardy’s four decades in the industry. Fruity with ripe banana, honey and butter. The palate is quite heathery and grassy. Some nice shortbread and peat in the finish.

Kilkerran 2004 Port Wood (abv unknown, OB)
This was a mystery bottle. It was taken from one of the first six casks filled at Glengyle back in 2004. Most of the content of those six casks has been used for a special set. But some whisky is still left in the casks, and McHardy filled a bottle from the Port cask and brought it with him. So this one was not from the official set that was released last year. I actually didn’t make notes. But it’s good though 😉

Springbank 1966/1997 Local Barley (52%, OB, C#489)
Lots and lots of coconut, followed by a hint of chocolate. Some sweet vanilla, citrus, lemon grass and honey. A bit waxy too. It shows a lot of depth. A fitting final whisky.

The tasting was great, the masterclass was fun and I enjoyed seeing many familiar faces, lots of them from the Dutch Usquebaugh Society. The venue was also superb, probably the prettiest I’ve ever had a tasting in. A special thank to Nils from Best of Whiskies for inviting me. I had a blast!