Mackmyra Stjärnrök is the latest release from this Swedish distillery’s Seasonal Collection. As we’ve gotten used to by now the cask recipe is quite elaborate. I’ll go into more detail later, but before I do I’d like to give the wheel to Jimmy Hansson, manager of Mackmyra’s curious Gravity Distillery.

I’ve written about Mackmyra a few times now, and upon drinking the Mackmyra Stjärnrök I realised I never really spent some time looking into their production process in-depth. So I got in touch with their former master blender Angela D’Orazio. She pointed me towards Jimmy Hansson, who was kind enough to give some more detail about their climate-smart gravity distillery.

For instance, they use wood pellets (a renewable resource) to heat water. And with help of heat exchangers they then use that hot water as heat in all the stages of production. Using hot water requires less energy than the use of steam for example. The residual heat from the heat exchangers is also used to heat their buildings, the distillery, their office and restaurant.

All the electricity used in Mackmyra’s production is produced by a water turbine which is situated about 10 kilometers from the distillery. The by-products from the distillation and mashing process gets sent away and is used to make bio fuel. The distillery is built like a tower so that their pumps get help from gravity (hence Gravity Distillery) when transporting the raw the materials down the “tower” through the different processes. It means their pumps don’t have to work at full capacity and are thus saving energy.

But even more so than their energy efficiency, I was especially interested in Mackmyra’s actual production of whisky. Because there is not that much about it online or on their website. Not the details I’m interested in anyway. Like what barley they mostly use. Hansson explained it varies throughout the year. “But for the most part it is Planet that we use. We buy the unsmoked Swedish malt from Viking Malt in Halmstad. It comes with a truck that fills our silo with approx. 35,000 kilograms. We make our smoked malt here on site, we buy Swedish barley, malt and smoke it and then fill the other silo.”

And then there’s the yeast and fermentation, according to some (and I think I might agree) the most important stage of whisky production. Mackmyra uses regular baking yeast, which means that the fermentation process is on the longer side, anywhere from 4 to 6 days. “Because Mackmyra was the first distillery in Sweden to make single malt whisky and since we wanted Swedish ingredients, there was only baking yeast available. The yeast affects the taste of the end product quite a lot and therefore we want to continue using it.”

Hansson describes the spirit as malty with sweet and fruity influences. Light and fresh are two other descriptors he uses. When it comes time to make the first spirit cut, they reduce the boiler for the spirit still, so they can more clearly distinguish the scents that are coming through. Hansson further explains: “When the alcohol strength approaches 75%, there are always two people that smell the spirit that flows through the lantern. Finally, the stinging tones begin to disappear and there is a more smooth and soft scent.

“After that comes the fruitiness and then it’s time to make the cut, usually somewhere in between 74 and 75% alcohol. The cut may take some time to make, because the two people have to agree on the right moment. There can be many samples before we think it is the perfect scent of the spirit.”

The heart of the spirit flows for about two hours, down until around 64 to 65%. Then the same process as with the first cut is employed. “Had we only gone on time as many distilleries do, there is a risk that certain fusel oils will enter the heart and affect the end result. We always make our cuts by hand in order to be able to influence the end result ourselves.”

There’s no whisky without maturation in oak. Mackymyra stores all their casks (filled at a strength of 63%) in Bodåsgruvan, a large mine that sits about 50 meters underground. This also brings us back to the Mackmyra Stjärnrök, because there’s no talking about this single malt without mentioning the incredible cask recipe.

Elaborate indeed, but let’s find out what kind of flavour characteristics they translate to.

Nose: Baked pastries with charred oak, ashes and herbal smoke. There are also notes of sultanas, quince jelly and raspberries, followed a faint touch of walnut skins and sweet chestnuts, as well as birch sap.
Taste: Liquorice root with salmiak powder and wood smoke, accompanied by sandalwood, charred oak and a touch of ginger and sultanas. Some cloves and orange peel as well, with just a pinch of pepper.
Finish: Lingering herbs and spicy oak. Medium to long.

Conclusion
I'm not sure which flavours exactly were inspired by the Nordic skies, but the Mackmyra Stjärnrök is a charming whisky with an imaginative smoke influence that's unlike what you might find in more traditional Scotch whisky. Lots to like here.
8.4
Related
8.1 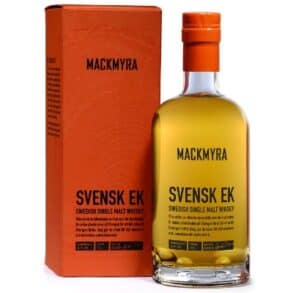