A heavily peated Loch Lomond is not something that comes around often. Usually it’s named Inchmoan, which I believe is produced in the unusual straight-necked pot stills. . (Michael, if you’re reading this and I’m wrong, please let me know.)

EDIT: So, master blender Michael Henry got in touch and turns out I was wrong. A lesson to never assume. This single cask Loch Lomond was made from heavily peated malted barley in Loch Lomond’s straight-necked stills and collected at low strength (a wide spirit cut).

Even more interesting, Henry told me Loch Lomond will stop using different brand names like Inchmurrin and Inchmoan for their single malts, instead housing everything under the Loch Lomond umbrella. They’ve (understandably) had some issues with confusion about the brand names, so they’ll now use flavour descriptors to differentiate the expressions.

Okay, got all that? Back to regular programming!

This refill American oak cask was picked by the people from The Whisky Exchange and released as a shop exclusive. As I’m quite fond of Loch Lomond and their quirky distillery and am curious to find out how this holds up.

Nose: Vanilla, cream and ripe bananas as well as some pistachio nuts. Touches of wet pebbles and freshly cut grass as well. A fair amount of sour beer and barley husks too. Of course, this is peaty as well—heavily peated even—but somewhat coastal and mainly civilised as well. Pretty vegetal overall.
Taste: Super oily and a sugary sweet arrival, before tumbling down a peaty, agressively spicy hole. Industrial and salty, but also some resin and menthol. There’s charred lemon peel as well.
Finish: Sour peat before settling into an array of soft, green fruits. At times almost vegetal.

This is certainly different from most of the peated whiskies that cross my path. It’s rather daring and bold and hard to pigeonhole—which is a good thing of course. If you’re into the traditional peated Islay whiskies, have the guts to broaden your horizons and try this stuff. Available here. 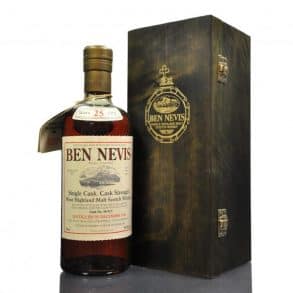