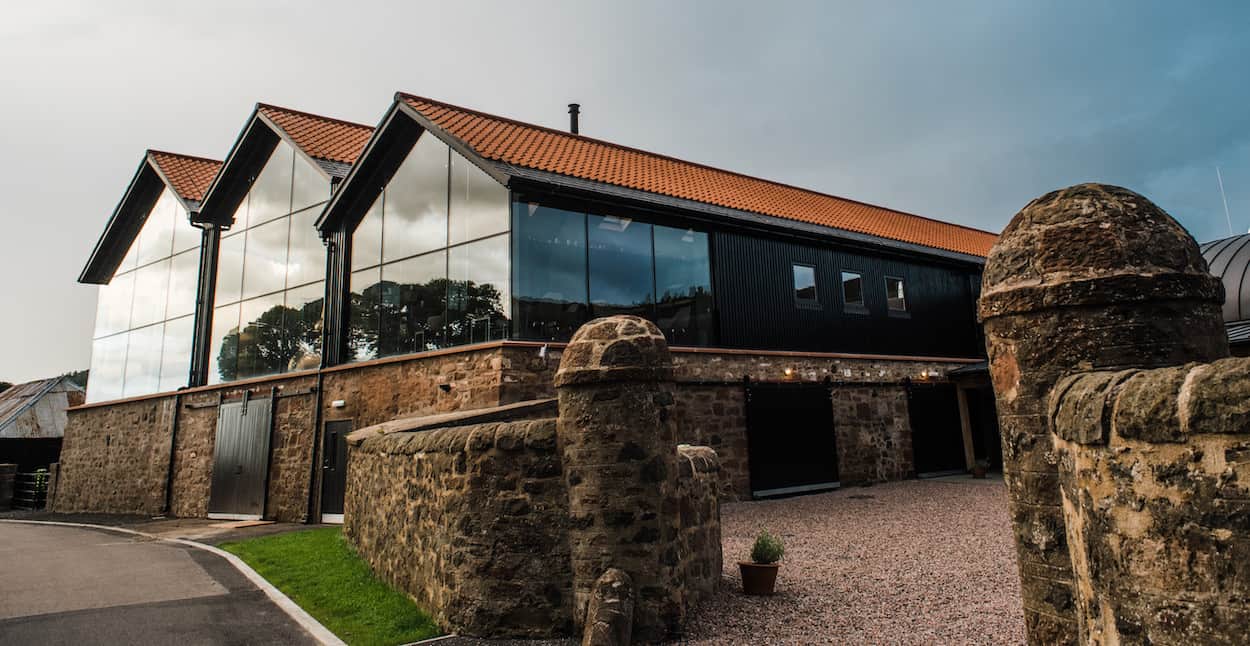 I got up before dawn, rubbed the sleep out of my eyes, drank a cup of coffee and ate a sandwich with strawberry jam. A little later I walked the short distance to work. There was a light drizzle. I didn’t mind though, because my place of work that day was Lindores Abbey Distillery.

This happened a while ago, in late November of 2018. We were expected at Lindores Abbey Distillery on Friday, so on Thursday morning my mate Chris and I left for Schiphol. We had booked an early flight, which meant we had to get out of bed before 4 AM. About six hours later we picked up our rental car at Edinburgh Airport, and made our way up towards Fife.

We made the obligatory stop at the Wallace Monument, before heading onwards for a visit of Daftmill Distillery. Shortly before dinnertime we arrived in Newburgh, home of Lindores Abbey Distillery. While this distillery only opened a few years ago, it has a storied history. Actually, it might have the longest history of any Scottish whisky distillery.

The Spiritual Home of Scotch

Many young distilleries try their damnedest to create something resembling heritage, often failing horribly. Lindores Abbey Distillery however, comes with a built-in history. It’s located next to the ruins of Lindores Abbey — stand next to the pot stills of the new distillery and you’ll get a beautiful view of the former monastery. 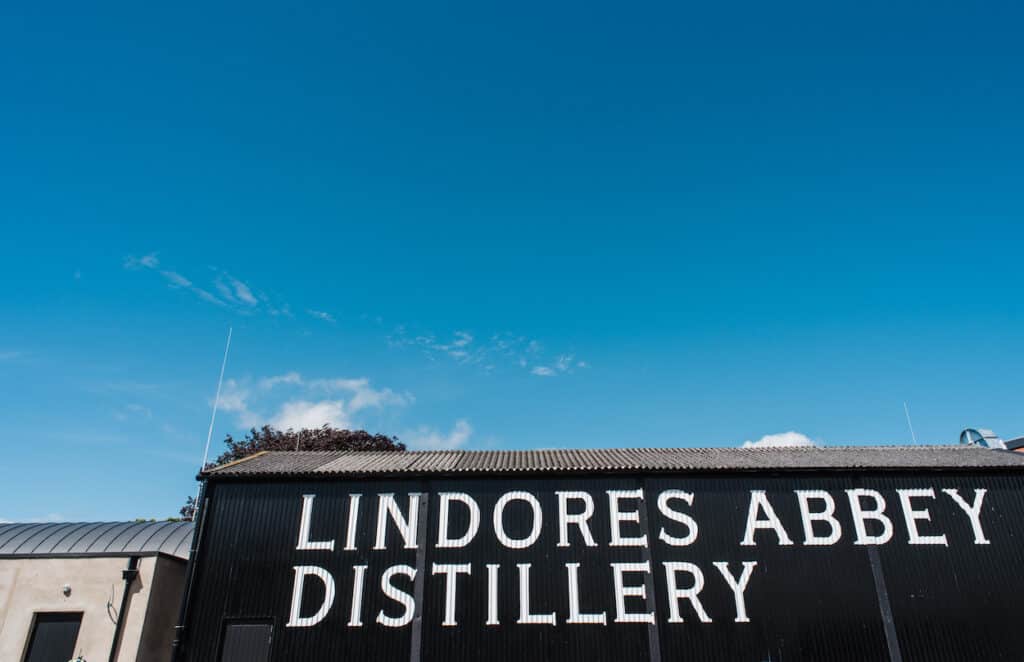 Distilling was taking place on this site at least as early as 1494, although it is assumed it was probably happening long before that. We know this because of the earliest written reference to Scotch whisky (or aqua vitae), which appears in the Exchequer Roll of 1494, naming brother John Cor, a monk at Lindores Abbey, who was commissioned by King James IV to turn 8 bolls of malt into aqua vitae. Because of this, Lindores Abbey is widely seen as the birthplace of Scotch whisky.

Our workday didn’t start until Friday morning, so Chris and I decided to take a quick peek right after we parked our car in Newburgh a day earlier. One of the first things I noticed is that Lindores Abbey Distillery is so much more than just a place where they make whisky. Stephanie Wilkie, the event manager, let us know that the distillery and the neighbouring abbey are popular wedding locations — proven by the fact that the first available date for a wedding is in 2021.

After a short tour of the distillery, we ran into Dave Whitelaw. Together with a bunch of his colleagues, he was loading up several dozens of casks into a lorry, waiting to be taken to a nearby warehouse. Dave used to be a plumber, but now he is one of two distillery operators. He and fellow operator Colin Gray answer to Gary Haggert, Lindores Abbey’s distillery manager. 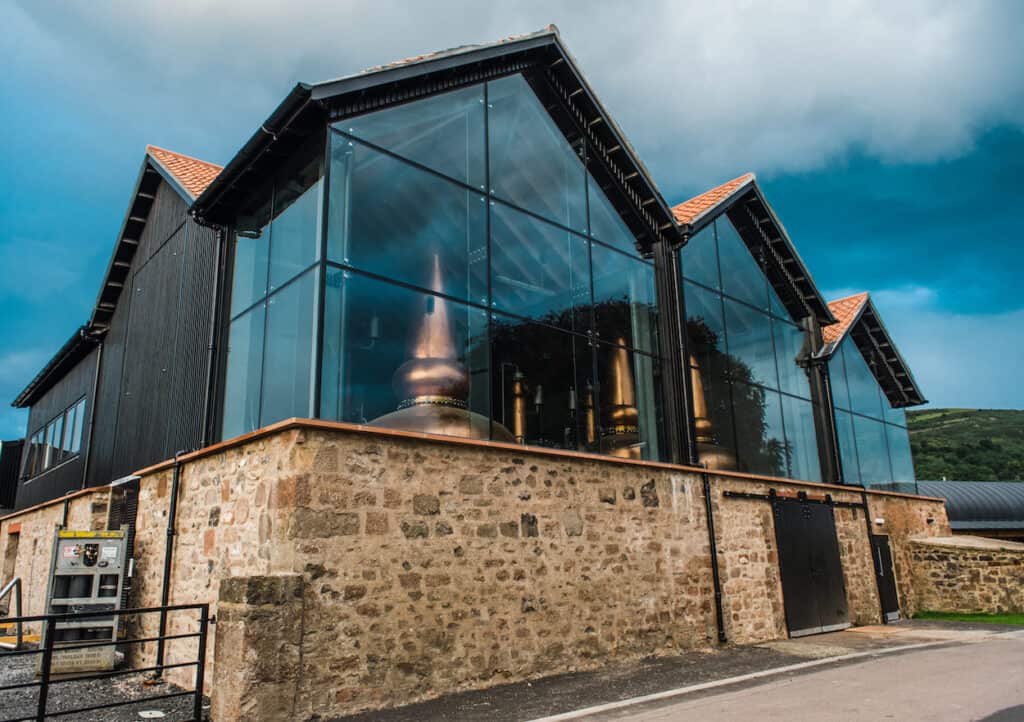 In absence of operations manager Helen McKenzie Smith — who co-owns the distillery together with her husband Drew — Dave proved to be the perfect host. He showed us to our accommodation, which is located not far from the distillery. Candlemaker Cottage is old and slightly drafty, yet cosy, clean and comfortable. Most important, The Bear Tavern, Dave’s favourite local pub, is a stones throw away. Chris and I went for a few pints that evening, which maybe wasn’t the smartest move after a tasking 20 hour day filled with air travel and lots of driving. When in Rome, eh?

I realise 7.30 AM isn’t that early to start your workday, but since I’m my own boss, I usually begin a little later. Not at Lindores Abbey Distillery though. Chris and I were expected to be there bright and early. But if anything is worth getting out of bed early for on a Friday morning, it is working at a whisky distillery.

Dave was obviously used to an early start, as he happily welcomed us into the distillery. The three of us (Dave, Chris, and I) were tasked with getting the distillery up and running before the rest arrived. Dave pointed out levers and buttons, pressed some of them, while leaving others for us to operate. The big generator started buzzing: a sign that the distillery was slowly waking up. 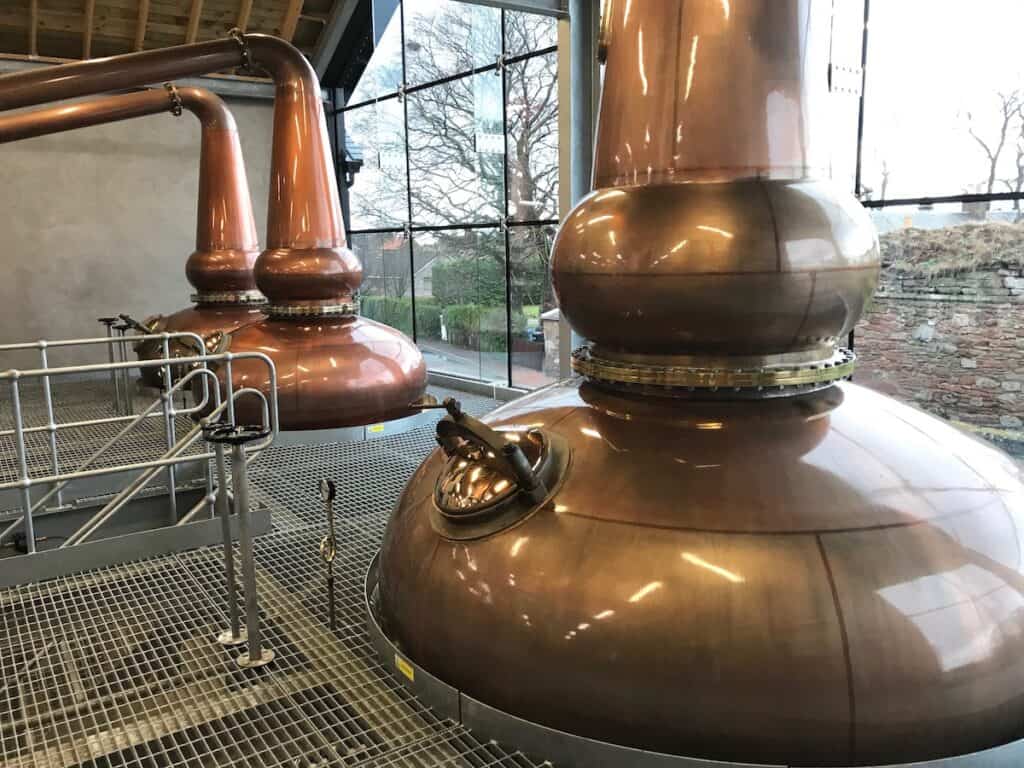 At Lindores Abbey Distillery, the entire production is located in one area, which is unusual in older distilleries, but common in modern distilleries. Our first stop that day: the mash tun. This part of production was Dave’s responsibility. Temperature is key here – not too warm, but definitively not too cold. The enzymes in the grist need to be activated, so starch can be converted into fermentable sugars.

Mashing, it turns out, is mostly a matter of closely monitoring the process. Most modern mash tuns are perfectly capable of controlling their own temperature, Dave explained us, but you simply can’t always trust a machine. Man needs to be ready to intervene. Mashing isn’t very exciting, but absolutely crucial. Also, the smell reminds me of porridge. I love porridge.

While we were busy mashing, manager Gary Haggart arrived on site. The start of his workday probably doesn’t conform to the romantic image many of us outsiders have. For a long time he was busy doing paper work, mainly for the casks he had sent to the warehouse the day before. His office is enviable though: a desk right in the middle of the production area, with views of the copper pot stills and the wash backs. 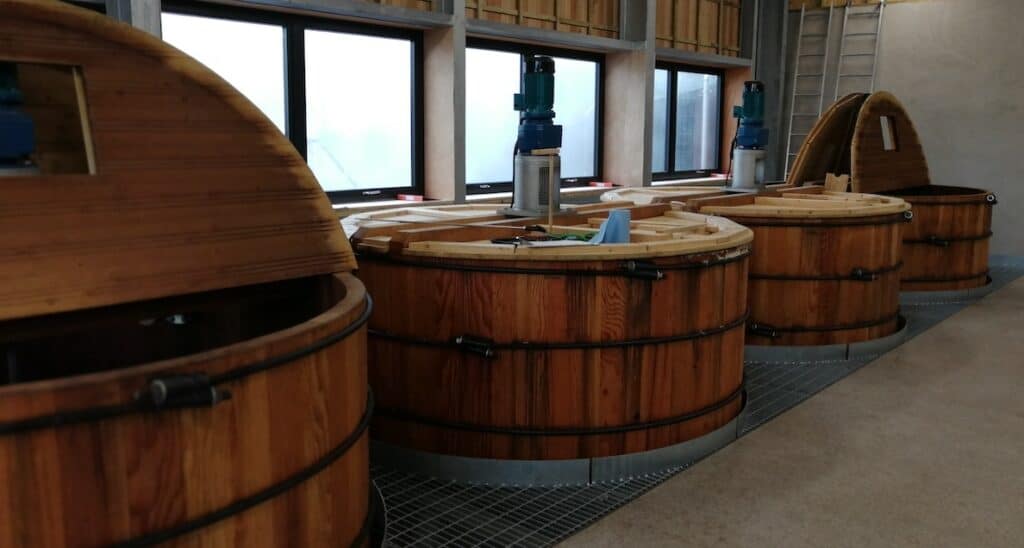 Colin arrived in the slipstream of Gary. His parents live right around the corner, and not that long ago Colin had a non-production role in the distillery. When the opportunity presented itself a few months earlier to move over to production, Colin jumped on it. His dad is a gifted baker, and all of us profited that morning. The millionaire’s shortbread Colin brought was heavenly.

Whisky production is all about patience. Such is often mentioned when it comes to maturing, but it basically is the case all throughout. After the mash was pumped into the washbacks, all I needed to do was add the dried Anchor yeast. I was told to add it slowly. It wasn’t the most difficult task, but after I finished pouring I did feel a tiny bit proud nonetheless. Then the long waiting game started. Fermentation at Lindores takes anywhere from 92 to 114 hours. By the time the beer I helped kickstart got transferred to the wash still, I was back home in the Netherlands. 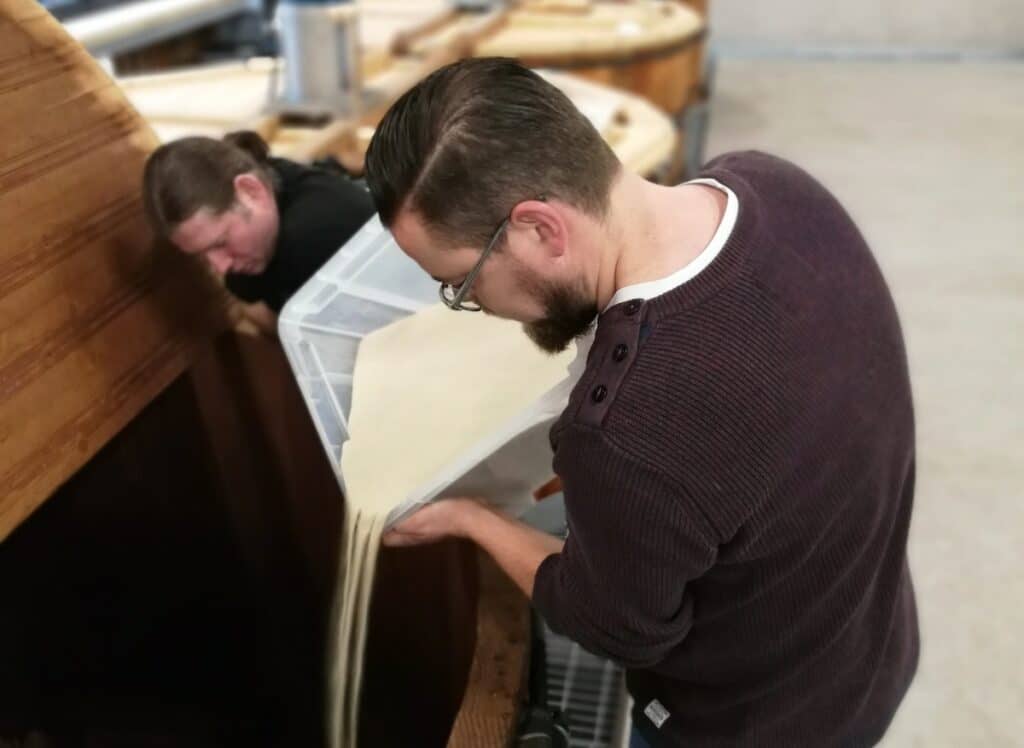 Working a day at a distillery gave me the chance to follow the entire spirit run. Again, patience is key. After the stills are fired, it takes a little while before the foreshot comes through. As soon as that was the case, we started testing the spirit periodically by adding water. Is the spirit still cloudy? Then you’re not yet at the heart of the run. At Lindores, the heart usually starts at around 75 percent abv.

I’ve been lucky enough to have visited dozens of distilleries, but during my day at Lindores I made my first ever spirit cut by manually switching the lever on the spirit safe. It then took about two hours until the spirit reached an abv of 67 percent – that is when I switched the lever back in time for the tail of the spirit run. As basic as it sounds, it really was somewhat magical. Also, let’s just agree right here and now that if you encounter an outstanding batch of Lindores in the future, I might very well have had something to do with it. 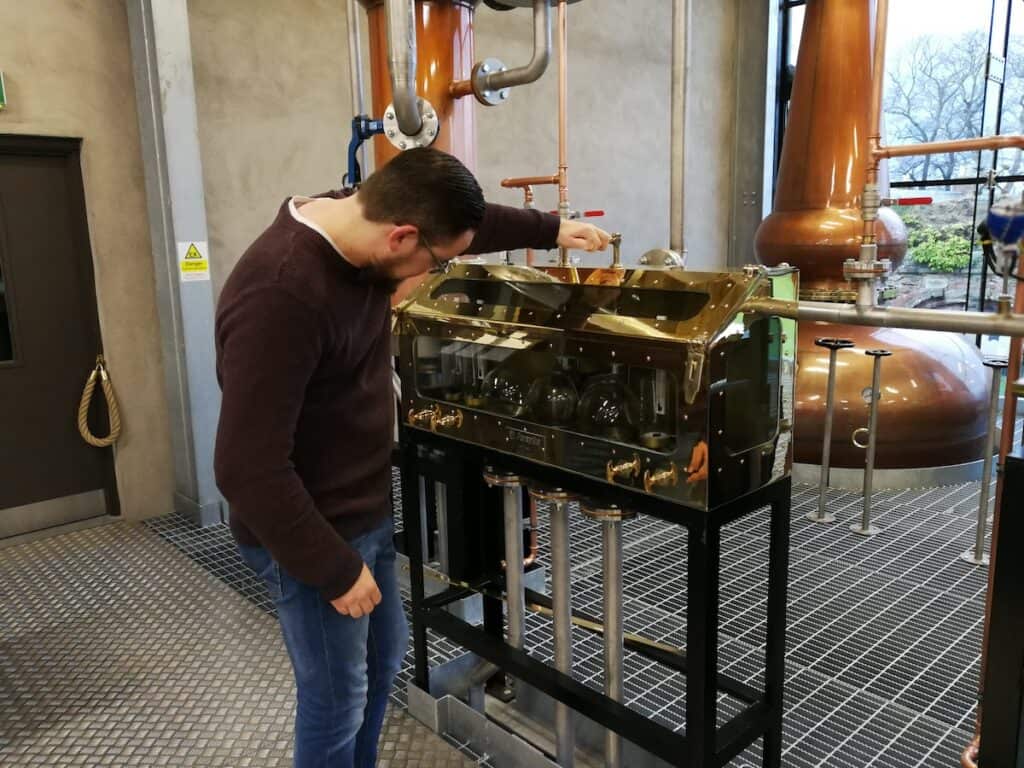 After lunch (accompanied by some of Lindores’ delicious Aqua Vitae), Chris and I followed Dave and Gary into the on-site warehouse. I think it was a lucky coincidence, but Gary had to create a small vatting for brand ambassadors Andrew Lennie and Murray Stevenson. Whisky it wasn’t yet, but they wanted to take the aged spirit to a whisky festival. It meant that we got to taste all the separate components.

While Lindores is officially a Lowland distillery, manager Gary isn’t chasing a flavour profile typical for the region. Maybe that’s not very surprising given his past as distillery manager at Cragganmore — a distillery that produces a rich, meaty new make. The Lindores Abbey spirit we tasted from ex-wine casks showed some spiciness I more associate with a rye whisky, while the spirit from Heaven Hill casks tastes much more mature than should be possible. 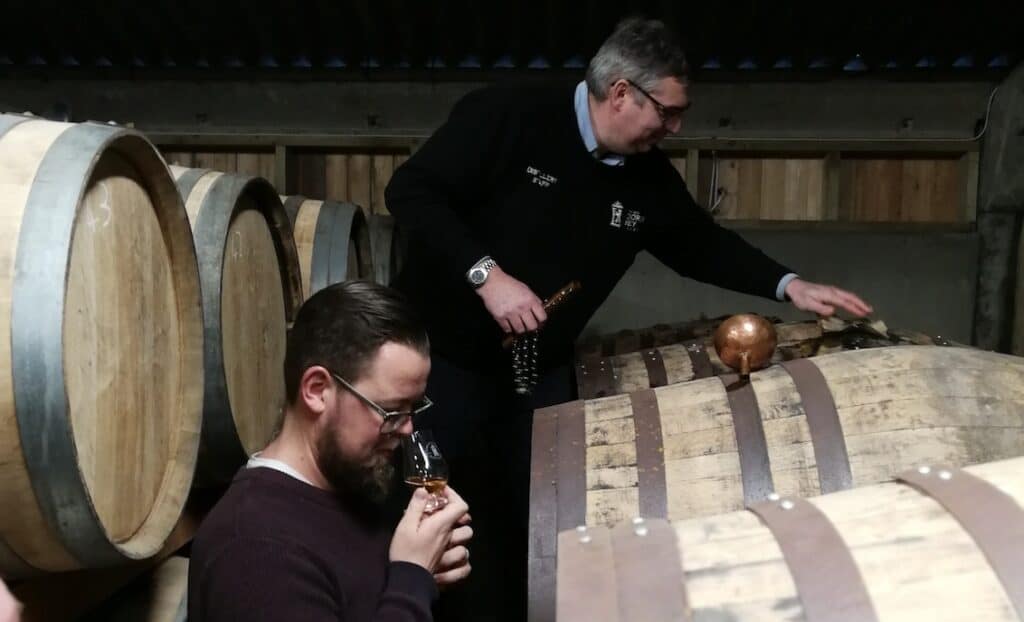 To be honest, I didn’t really work all that hard during my day at Lindores, in part because we were lucky that we didn’t need to clean anything. Above all, Chris and I were shown a great time, and we learnt a few things as well — among them that I enjoy writing about whisky more than actually making it.

I’ll leave that to the people that actually know what they’re doing — and are a little more patient than I am. People like Gary, Dave and Colin, who welcomed us into their kingdom with true Scottish hospitality. Lindores is a place where people take pride in their work, and I’m very curious to one day taste the finished product. For now, that Aqua Vitae tastes mightily good.

A version of this article appeared in the Spring issue of Whisky Passion.