Laphroaig 15yo: Old versus New

The minute that the new Laphroaig 15 was announced for the 200th anniversary of Laphroaig, I knew I wanted to compare the new versus the old. That was more than six months ago, and now the day has finally come 🙂 I’m not exactly a peat lover, but there’s something about the Laphroaig 15. It is a classic Islay whisky, held in high regard by many Islay fanatics, and it was made even more of a classic after its discontinuation in 2009.

A couple of weeks ago the first 2.500 bottles of the anniversary edition were released for the Friends of Laphroaig. I tried to get my hands on a bottle, but it was damn near impossible because the people at Laphroaig couldn’t be bothered to get more bandwidth for their website. It is not that difficult guys! Just email or call your hosting service and inform them of a upcoming rush in traffic.

Luckily there are always some people happy to share whisky, and through some sample swaps I obtained both the new 15yo (thanks Peter!) and the old one (thanks Arjen!). Let’s start with the old one. 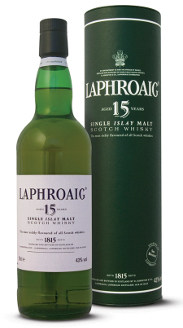 Nose: Salty and peaty with dried seaweed and the smell of a smouldering campfire. There’s some light citrus and lemon, along with custard and ginger.
Taste: Peat, rubber and licorice with some tree bark. There’s some slight bitter orange detectable, along with black pepper and salt. Full-bodied palate.
Finish: Very long and intense with tar and smoke. A bit dry. It ends on a bitter note.

Nose: Peat is subtle and the nose is fairly sweet. Some soft vanilla and mild sugar, along with ripe banana, banana sweets and green apple. There’s a hint of rubber.
Taste: Smoky and peaty, with a fair amount of pepper and some tannins. A bit medicinal. There’s not a lot left of the sweetness that was so prominent in the nose. The palate is too watery.
Finish: Some peat, nuts and a hint of chocolate at the end. Long, but not very strong.

Conclusion
If you taste both of these head-to-head, there is a pretty big difference between the two. The 2006-release is the clear winner. The nose of both versions is pretty good, they are just not the same. The new anniversary edition is much sweeter. But if you like sweetness, that might just be your thing. It’s just a matter of preference.

When it comes to the palate, the 2006-release easily wins. It is richer and more full-bodied. The finish is also more intense and longer.

I wouldn’t call the anniversary edition a glorious return of the Laphroaig 15. It is a fine whisky, but that’s about it. It won’t be long before you’ll find them in a shop near you. It is a cool, landmark release. But not because of its exceptional quality. You can find better peated whiskies for the same price.