Visiting Diageo-owned distilleries can be a repetitive experience. But Lagavulin, though Diageo-owned, has a secret weapon. Or maybe it’s not so secret. Most have probably heard of Iain MacArthur by now. And if you haven’t, maybe the nickname Pinkie rings a bell? He has been at Lagavulin for 45 years, and his Lagavulin Warehouse Demonstration makes a visit to Lagavulin distillery quite worthwhile.

The fun thing about the Lagavulin Warehouse Demonstration is, aside from the obvious, it is very accessible for us commoners. At most distilleries, you need to have very good connections or deep pockets to do a warehouse tasting, if at all. At Lagavulin all you have to do is pay 23 pounds at the till. That’s (way) less than I pay for most tastings I attend in The Netherlands. In return you get to taste a handful of Lagavulin straight from the cask.

You can probably imagine that when I visited Islay a couple of weeks ago, I was very happy to fit the Lagavulin Warehouse Demonstration into my schedule. I arrived a little early, so before retreating into the waiting area I had some time to look out over Lagavulin Bay and wave at the seals. I don’t think they saw me. Or they probably couldn’t be bothered.

While waiting for the tasting to start, I was happy to see Iain MacArthur pass by. Because while he hosts the Lagavulin Warehouse Demonstration on most days, he also has the occasional day off. And a warehouse tasting at Lagavulin hosted by someone other than Pinkie? Nah, that just doesn’t fly.

I attended a Lagavulin Warehouse Demonstration from Iain MacArthur a little over two years ago, and the first thing I noticed is that he now has an assistent helping him, mainly to keep Iain free to talk and interact with the attendees, but also to regulate the pours of whisky. A health and safety measure.

Much needed if you ask me, because last time Iain’s pours were so generous, that we probably could’ve drank the equivalent of half a bottle had we wanted to. Instead we had to pour quite a lot onto the damp warehouse floors, just to keep ourselves from becoming excessively intoxicated. Not this time though. The pours were roughly 2cl I think, a nice amount when tasting seven whiskies in a row. 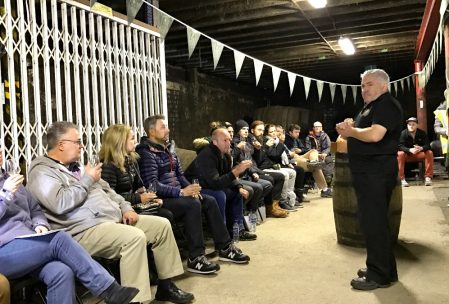 Iain was a very gracious host. Using his booming voice to grab attention, but also often taking the time for some small talk with one or two individuals. He made sure everybody felt at ease and had us singing a song for Lagavulin’s 200th birthday at one point. And best of all: he had some amazing Lagavulin for us tot taste!

I don’t write extensive tasting notes at events like these, let alone rate the whisky’s. I only do that when I’m in the controlled environment of my own home. But I do write down some general impressions. And I’m glad I did, because the line-up of the Lagavulin Warehouse Demonstration is just great.

Lagavulin 2016 Jazz Festival Edition (54,5%, refill American oak & 1st fill ex-bourbon)
An annual special edition for the Jazz Festival. Surprisingly friendly on the palate, even though it was only 10.30 a.m. and this was the first whisky I tasted that day. One at cask strength at that. Clean and crisp ex-bourbon Lagavulin.

Lagavulin 18yo 1998 (57,5%, 2nd fill sherry cask)
Really light in colour and flavour. The first filling of this cask must have sucked a lot of life out of it. Aniseed, pears. Quite pepper-y and hints of sugar.

Lagavulin 34yo 1982 (55,2%, ex-Dewars cask)
A 34 year old Lagavulin? A bottle of this would be way beyond my reach. Lots of cinnamon and chocolate, with subtle peat and zesty lemon. Earthy. My favourite of this tasting. Stunning whisky.

Lagavulin 50yo 1966 (abv unknown, ex-bourbon cask)
As Iain put it, this cask was only for directors and important people (probably to be taken with a grain of salt). But today we were his directors, so what the hell, he opened it and poured us a dram. I think he does this quite regularly, but certainly not always. There was a cask of 1966 (maybe the same) when I was there two years ago, and it remained closed then. Although undeniably good, this whisky was probably most special because of its uniqueness rather than its actual quality. Iain wouldn’t tell me the alcohol percentage, but assured it was still above 40 percent.

The above line-up speaks for itself. If you ever visit Islay, the Lagavulin Warehouse Demonstration is an absolute must. 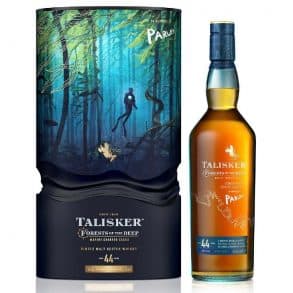