A Lagavulin Tasting To Die For

Every once in a while you attend a tasting and just know beforehand it is going to be an awesome one. This was the case a couple of days ago, when the Dutch Usquebaugh Society held their 26th anniversary tasting. Seeing as Lagavulin celebrates their 200th anniversary this year, the Islay distillery played the featuring role during a memorable afternoon.

The Usquebaugh Society is (as far as I know) the oldest whisky society in The Netherlands. The Society has many longtime whisky geeks among its members. That’s a blessing. Mainly because these (mostly) guys have a lot of knowledge, an it is always fun for a relative youngster such as me to spend an afternoon in their company. They are often also the members with awe inspiring collections, stemming from a time when whisky was relatively affordable.

Thanks to some of those members being very generous, the Society produced a line-up including (but not limited to) an old Lagavulin 16 White Horse (from the early 90’ies), a Lagavulin 1980 Distillers Edition, and two Lagavulin 25 Year Old (the 2016 and the 2002 version). All for just 55 euro.

One of the most interesting things of the afternoon (for me at least) was to be able to compare the modern Lagavulin 16 Year Old to an old White Horse edition. The differences where shocking to me.

The White Horse was fruitier (mainly red fruit),  slightly musty, seemed to have a more obvious sherry influence, and had a hint of soy. Farmier notes revealed themselves after a while. The peat seemed more subdued. Plenty of wood smoke though. And the palate was much more delicate than that of the new Lagavulin 16 Year Old.

You can safely say that I am very much in love with (at least this particular bottle) of the White Horse-edition. A 90+ whisky for me. Since this bottle was well over 20 years old, I believe I detected a bit of bottle aging as well. An unfair advantage over the modern bottling. But even taking that into account, I don’t think that bottle aging would’ve put the modern version at the same level as the White Horse.

Onto the highlight of the afternoon. It was time to do a head-to-head between the new 25 Year Old released just last month, and the old 25 Year Old from 2002. Certainly one of the best, most exclusive comparison tastings I’ve ever done. These are drams that I could easily spend an evening with. There’s just so much going on. 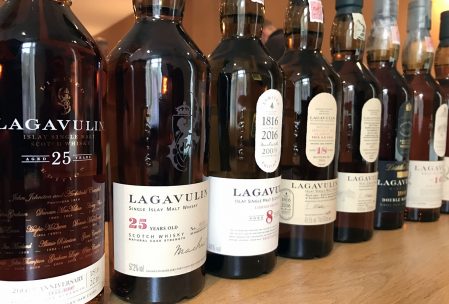 Immediately I notice the difference in colour. I’m not sure if both are natural colour, but I suspect they are. The 2002-version is much lighter, and judging by the nose it is a lot less sherried than the darker 2016-version. Still, there’s oranges, marzipan, cherry candy cane. It seems peatier than its modern counterpart.

Nosing the new Lagavulin 25 Year Old is like inhaling barbecue fumes. Wood smoke, charred wood, dried meat. Also very citrus-y, and just a touch of sulphur. The palate is oilier, which is always a plus for me. Tobacco leaves, polished leather. Yum!

Both are simply incredible whiskies, but I give the nod to the new 25 Year Old. It’s a bit richer and more vibrant.

We tasted the Lagavulin Jazz Festival 2012, which really packed a punch. And the Feis Ile 2016, an ever-changing, complex Lagavulin. The 1980 Distiller’s Edition was the most heavily sherried Lagavulin. I blended part of it with the last bit of my White Horse-edition, and the result was great.

We also tasted the Lagavulin 8 Year Old, which just had to be part of the line-up, with it being the official 200th anniversary release and all. Then there were two more that I’m not allowed to write about! I really want to, but I can’t. I signed a non-disclosure agreement. Seriously.

After the official part was over, someone reached under the table and came up with a large sample of Longmorn 1964/1990 from Chieftain’s. It might’ve been the best whisky of the day. Considering what I tasted up to that point, that is really saying something.

A big. big thank you to everyone who made this tasting possible. It was suggested that next year the Society’s anniversary tasting might have a Cadenhead theme, since the independent bottler celebrates its 175th anniversary in 2017. Sounds like a great idea. Let’s make it happen!