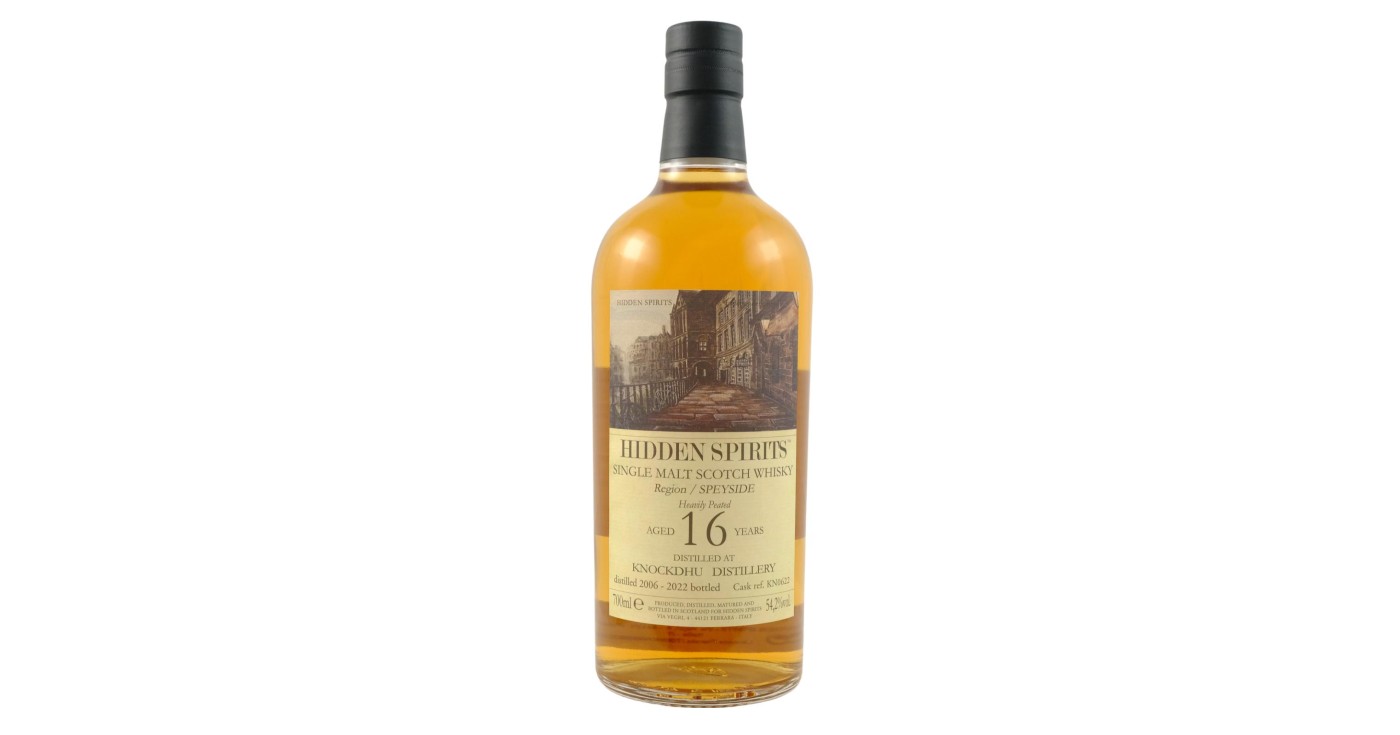 Hidden Spirits has made a name for itself with quality single cask releases, while Knockdhu remains one of the most underrated distilleries in Speyside. Knockdhu (maybe better known as anCnoc) isn’t often released by independent bottlers. But now all of a sudden Hidden Spirits and WhiskySponge (another highly-regarded bottler) both have launched their own Knockdhu 2006 16 Years. I’ll take that as a very good sign.

Knockdhu is owned by Inverhouse Distillers, a company that also owns Old Pulteney, Balblair and Speyburn. Inverhouse doesn’t seem to be a hugely hands-on parent company when it comes to Knockdhu. And I mean that in the best possible way. They seem to know that Knockdhu is in great hands with distillery manager Gordon Bruce, who has tinkered and tweaked the distillery into submission. He is probably one of the most technical distillery managers I’ve encountered and has achieved some impressive sustainability improvements over the years.

“Efficiency wise we used to need 10.5 kWh to produce one litre of alcohol, we’re now down to about 6.5 kWh”, he once explained to me. “There’s different ways to do that. You can fly in consultants and throw a few million pounds at your distillery. Or you can evaluate your process very carefully and tweak things. It’s far more satisfying achieving an energy saving of 0.1 kWh per litre of alcohol by actually looking at the process and tweaking the plant slightly.”

The Knockdhu 2006 16 years from Hidden Spirits is heavily peated. The distillery’s peated new make was never intended for use in single malt, but instead for Inverhouse’s blended whiskies. But the stuff was maturing so well and the level of interest in peated whiskies these days is probably higher than it ever has been. That’s why anCnoc’s core range now features plenty of smoky single malts.

The distillery produces peated whisky for about a quarter of each year. They’ll play around with the cut points to catch the exact phenols they’re looking for. “Most of the big, heavy phenols come off towards the end. We’ll lower the cut point slightly. But our cut point will change year-over-year depending on barley variety or how the growing season for barley has been.

Nose: Despite the Aberdeenshire peat, but this has something distinctly coastal at times. Dried seaweed, bandages. Vegetal smoke. Some charcoal briquettes as well. But there’s plenty of fruitiness too. Grilled pineapple, charred lemon peel, apricots. Then there are warm touches of oat cookies and honey, with finally a whisper of draff.
Taste: Soot, charcoal and bonfire smoke intertwined with a touch of rubber, lemon zest, apricots and nectarines. Also a subtle spiciness highlighted by nutmeg and aniseed. Extremely warming and inviting.
Finish: More of the above. Lingering for a long time.

Conclusion
So very mature and rich. One of my favourite heavily peated releases in recent memory. I'm extremely enamored by the Knockdhu 2006 16 Years from Hidden Spirits, but the price is a little more difficult to swallow. At approximately 185 euro this far surpasses what I would expect to pay for a 16-year-old from a relatively unknown distillery. Then again, it's such a quality dram that it just might be worth it.
9