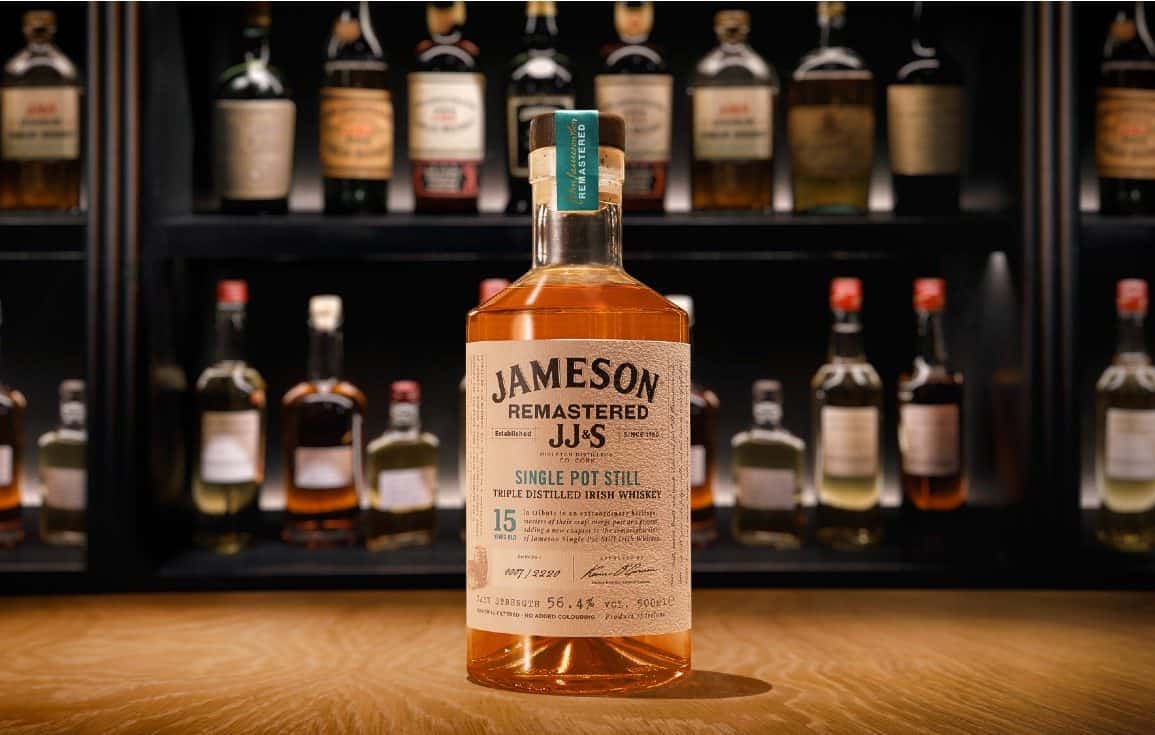 Midleton Distillery has announced the Jameson Anthology series. It will be kicked off with the new Jameson 15 Years Single Pot Still, part of the first volume called Jameson Remastered. The new Anthology series draws “inspiration from the past as well as imagining new possibilities.”

The Jameson 15 Years Single Pot Still is a reinvention of an old classic which was last produced in the year 2000 as a limited offering. However, contrary to the previous 15-year-old, this is bottled at a high strength of 56.4%. The new release is comprised of three different Irish pot still whiskey styles, spanning 15 to 17 years in age. The whiskey has matured in American bourbon barrels and Oloroso sherry butts.

The soon to be released second volume of the Anthology Series, Jameson Remixed, will “explore and experiment with new tunes from Jameson for an altogether different take on the classic Irish icon.”

Master distiller Kevin O’Gorman is responsible for the new Jameson 15 Years Single Pot Still. He says: “It’s been more than two decades since the last Jameson 15 Year Old was created and it has been a great opportunity to remaster this classic whiskey.

“For this limited-edition bottling, we seized the opportunity to combine the traditional single pot still style with the strong influence of the sherry casks, which was integral to historic whiskey production. We’re confident to have developed a contemporary iteration of Jameson 15 Year Old that pays tribute to the torch bearers who put Irish whiskey on the map, whilst nodding to the current generation of talented craftspeople at Midleton Distillery. We can’t wait for Jameson fans to sip, savour and enjoy it to the very last drop.”

Nose: Rich nutty tones, dark berries and ripe orchard fruits mixed with sweet woodland spices. Underlying hints of oak combined with dried herbs and traditional pot still flavours, all wonderfully balanced and complex.
Taste: Robust and spicy with the pot still influences to the fore accompanied by the oak’s tannins alongside silky, textured layers of sweet dairy fudge and vanilla. Soft fruit notes of cherry are intertwined with fig and plum.
Finish: A rich and lasting finish with the duo of fruit and spices lingering before the toasted oak’s drying tannins have the last word.

The Jameson 15 Years Single Pot Still Remastered comes in a 500ml bottle and will retail for €300. Only 2,220 bottles are available through two online ballots. The first ballot will open to members of the Barrel Club Midleton Distillery at 9:00am (IST) on April 4th. The second ballot will open to the general public on 2:00pm on April 8th. You can enter the ballot here.