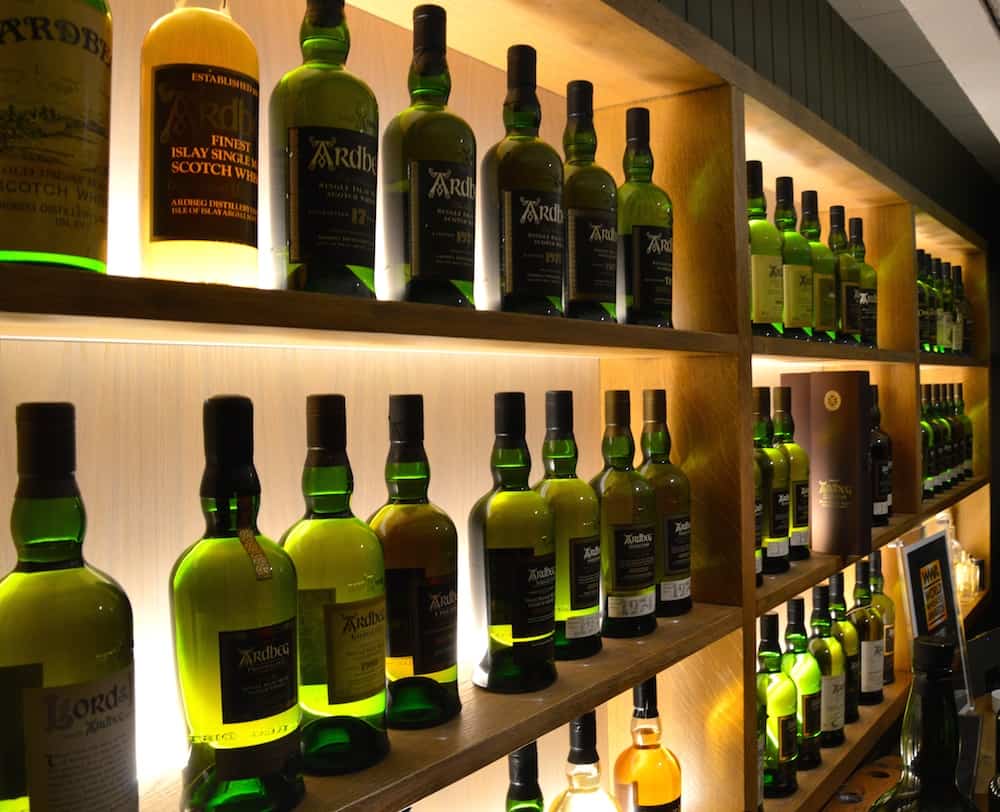 Islay Visit: Going On A Hike To Ardbeg

There are connoisseurs who log every whisky they have, either in a spreadsheet or in a little notebook. Or both. I don’t do that. So I can’t state this with 100 percent accuracy, but I’m 99 percent positive that Ardbeg Ten was the first ever peated whisky I drank, and definitely the first peated whisky of which I owned a bottle. I’m not kidding when I say that I was blown away. My god, what a sensation that was.

Nowadays I’m not that big a fan of peated whiskies anymore. I only have a handful of bottles at home and if I do drink a smoky whisky, I tend to go for the more gentle ones. That being said, when I visited Islay last June, Ardbeg was obviously one of the places I wanted to go. My preference may not lie with them anymore, but it is still one of the most iconic whisky brands in the world.

Since our ship, the Thalassa, was moored in the Port Ellen Islay Ferry Terminal, going about by foot was the best option for our little group of whisky lovers. The short hike from Port Ellen to Ardbeg is highly recommended, especially for the whisky enthusiast. It’s about four miles and takes you past two other Islay icons: first Laphroaig and then Lagavulin. You walk on or alongside a road that is also used by cars. When I was there, they were in the midst of constructing a path for pedestrians all the way from Port Ellen to Ardbeg. I’m guessing that it’s finished by now, and if not (they might take their time, who knows), it’ll certainly be finished when the busy season of 2015 starts.

There was a light drizzle the day we visited Ardbeg, which, to be honest, only added to the experience. Islay (and Scotland in general) is wonderful when the sun shines, but sometimes some proper Scottish weather really does the trick. The giant wooden structure of the World Cup-trophy was still standing in the middle of the parking lot when we arrived. It was two days after the celebrations of Ardbeg Day, and the trophy was used for the introduction of their World Cup-themed whisky, the Auriverdes.

Our guide Heather was feeling the after-effects of the big celebration. She, as did others on the Ardbeg-staff, still sounded a bit hoarse from all the partying. I guess we should’ve been there 48 hours earlier. As a consolation for us, Heather then proceeded to pour some Ardbeg 1974/2002 from cask 3498. Coming late to the party paid off after all. This particular cask was supposed to be for the Italian market, but during bottling they accidentally added too much water, bringing the alcohol percentage down to 40,1 percent. So now they use this whisky for distillery visitors. Since we tasted it outside in cold weather (far from ideal tasting circumstances), all I can say about this Ardbeg 1974 is that it was a great way to start the tour. And if the good people at Ardbeg ever accidentally water down a 1974 again, I don’t mind being accidentally sent a bottle of the stuff.

The first stop of the tour was at the Boby-mill, which originally dates back to 1913, making it over a hundred years old. It was installed at Ardbeg in 1921 and used to be powered by steam. The ancient apparatus can mill up to 72 tonnes of grain per week, at batches of 4,5 tonnes per time. The malt, maybe not surprisingly, comes from the nearby Port Ellen Maltings and is peated at 50/55 parts per million. The six washbacks of Ardbeg are made from Oregon pine and hold 23.500 liters of wort. The fermentation period at Ardbeg takes about 55 hours after which the wort is turned into a beer-like liquid called wash, which has an alcohol percentage of about eight percent.

The most interesting part of Ardbeg is the stillroom. Much to my astonishment, there are only two stills at Ardbeg. The wash still holds a maximum of 18.000 liters, while the spirit still holds a little less at 16.000 liters. The maximum capacity is only 1.3 million liters of spirit per year, a lot less than I expected for a brand this size. Since a washback holds more wort than the stills can handle, only half of the content of one washback is distilled at a time.

Ardbeg is the only Islay-distillery with a purifier, attached to the lyne arm of the spirit still. This purifier catches the heavy phenols and redistills them, which, according to our guide, is what makes the Ardbeg spirit so light and fruity. After distillation, the spirit runs through the spirit receiver, which gives me a chance to give you one final nerdy tidbit of information. The foreshot at Ardbeg, the most volatile first part of the spirit, takes only about ten minutes. Then the middle cut, which is what’ll actually go into the cask, goes on for about five hours. The feints, the final part of the spirit, then runs for another four hours.

We finished the tour at Ardbeg with a wee tasting, which didn’t really pan out the way we hoped. The teeny tiny tasting room at Ardbeg was way too small for our party. Our group counted about 24 heads, so I’m the first to admit that’s rather large. But if I were to take a guess, the maximum capacity of that room is about eight. Considering the spacious visitor centre (the mens room was literally three times bigger than the tasting room), the people at Ardbeg would be wise to invest in a bigger place for tasting whiskies.

All in all a very nice visit to a distillery that is beautifully located and is a lot more quaint than I expected. Guide Heather was also kind enough to take a group picture, which I think is a nice way to end this blog post.

Previous
Glenglassaugh 32yo from Villa Konthor