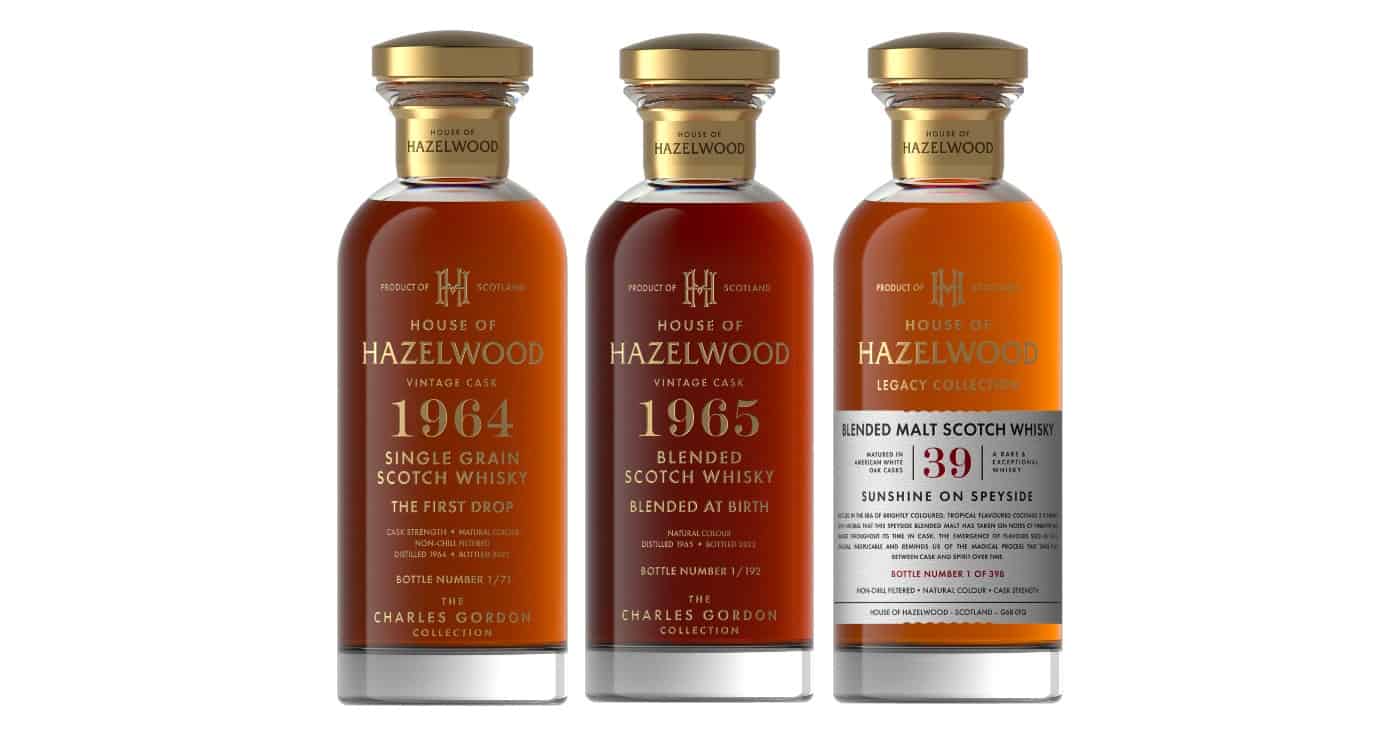 Earlier this summer House of Hazelwood launched a new collection of whiskies. A total of eight blends, blended malts and grain whiskies were announced, three of which I’ll review today. There’s The First Drop, a 58-year-old single grain; Blended at Birth, a 56-year-old blended Scotch; and Sunshine on Speyside, a 39-year-old blended malt. Impressive, no?

You might’ve come across House of Hazelwood before. In 2016 there was a trio of art deco inspired Scotch whiskies carrying this name (now discontinued). I’ve seen them on shelves of whisky shops, but I don’t believe they were received particularly well – or at least not to the extent that my interest was peaked. This is going to sound snobby, but blended whiskies bottled at 40 percent and sold for a premium? Meh. There’s plenty of other fish in the whisky pond.

However, the House of Hazelwood that I’m writing about today is completely separate. The brand owned by the Gordon family, but even though they’re massively influential, they aren’t talked about often, so I wouldn’t expect you to know who they are.

However, I’m confident that William Grant & Sons rings a bell. Indeed, it is the company that owns distilleries such as Glenfiddich, The Balvenie, Kininvie and Girvan. And who owns William Grant & Sons? You guessed it, the Gordon family. As the story goes, they’ve carefully laid down stocks of whisky for special occasions and personal consumption. And now they’ve decided to make some of their personal stock available to the public.

House of Hazelwood is named after the family’s Dufftown home, Hazelwood House. The House of Hazelwood inventory is held in warehouses across Scotland, with fresh stocks laid down each year. But prior to bottling a small proportion of the stocks are held in traditional dunnage warehousing near Dufftown. This is how an anonymous representative of the Gordon family explained it.

“For almost one hundred years my family have been laying down stocks of whisky to mature for future generations to enjoy, with the collection growing in scope and stature as the decades have passed. For the first time, this once-private collection is being offered to those outside the immediate family in small batches hand-selected for release. These are the most compelling whiskies that the inventory has to offer – a bridge between the past and the present, each issue remarkable by virtue of its character, history or method of production.”

I was contacted a few weeks ago if I were willing to review some of the House of Hazelwood releases. And that’s how we got here, with a trio of precious whiskies begging to be consumed. Let’s not wait any longer.

On 8th January 1964 the first drops of new make spirit were produced at Girvan Distillery in South Ayrshire. That makes this release a piece of Scottish whisky history.

Nose: Butterscotch, beeswax and furniture polish with a hint of leather, as well as tobacco leaves. There’s also tropical fruits, such as apricots and peach, accompanied by a tinge of orange zest and coconut. Maybe even a hint of soot.
Taste: An interesting hint of smoke is complemented by burnt caramel, toffee and cigar tobacco, as well as sandalwood and breakfast tea. There’s a sliver of dark chocolate complimented by marzipan, resin and coconut.
Finish: More resin, some lingering cracked black pepper corns, but mostly sweet toffee, fudge and charred oak. Medium in length.

Conclusion
An extremely rich, slightly darker than expected single grain, this Girvan immediately jumps to the top of my favourite single grains. And while it has the lowest abv of the three I’m tasting today, it certainly doesn’t behave like it. Bold stuff.
9

The components of this blended malt are unknown. There’s a good chance at least some Glenfiddich or Balvenie made its way into the recipe, but who’s to say the Gordon family doesn’t have casks from many other distilleries in their own personal collection?

Nose: Surprisingly light and somewhat grassy, there are subtle notes of apple peel, charred pineapple and grainy pear, but the cereal influence is noticeable too. For instance, there’s some chaff and pot ale, but it’s accompanied by a light touch of rose water.
Taste: Somewhat thin mouthfeel, especially in this lineup. A sweet arrival with touches of vanilla, mango, meringues and processed sugar, but there’s also an oak-y bitterness, subtle tannins, some crushed mint and chalk. The soft floral influence makes an encore.
Finish: Just a touch of smoke, some lemon zest and sweet mango. Lingering tannins and bitterness. Short to medium in length.

Conclusion
It gets penalised slightly for the shorter finish, but overal there are elements of this blended malt that remind me of a traditional Lowlands profile. From the official tasting notes you’d expect this to be quite the fruit bomb, but I didn’t find that to be the case.
8.6

Distilled in 1965, this blended whisky was married as new make and matured in an ex-bourbon American oak cask. Again, there’s no information about the components, but there’s a good chance this includes some combination of Girvan, Balvenie and Glenfiddich.

Nose: Full on rancio. Musty cellars, mushrooms, balsamic vinegar and walnuts. There’s marzipan, polished shoes and orange liqueur as well. Then some plums, figs, cassis and tinned peaches in the background. Bold and rich.
Taste: Creamy mouthfeel. There’s a hint of mead, more balsamic, mushrooms, some blackcurrants and a pinch of black pepper. Whispers of mint, espresso and aniseed too. It also has some Jamaican funk (almost).
Finish: A lingering herbal, minty finish with some grilled pineapple.

Conclusion
Just an extraordinary whisky that surpasses my expectations. And really, it's quite unlike any whisky I've ever tasted. There's elements of long-aged brandy and mature rum in House of Hazelwood's Blended at Birth.
9.2

Such a privilege to work my way through these rare whiskies, but that doesn’t mean I believe they were all outright winners. Each very different from the others. As a blended malt, the Sunshine on Speyside should theoretically be most in my wheelhouse, but reality proved otherwise.

The First Drop, but especially the Blended at Birth were both remarkable whiskies. After nosing (and not yet tasting) the latter I even found myself checking its price to see if it would be attainable for me. It isn’t, but it’s an indicator of how good I think it is. 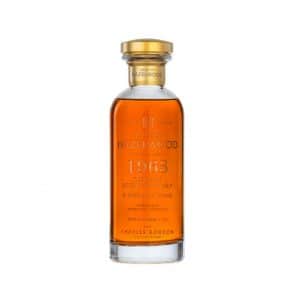