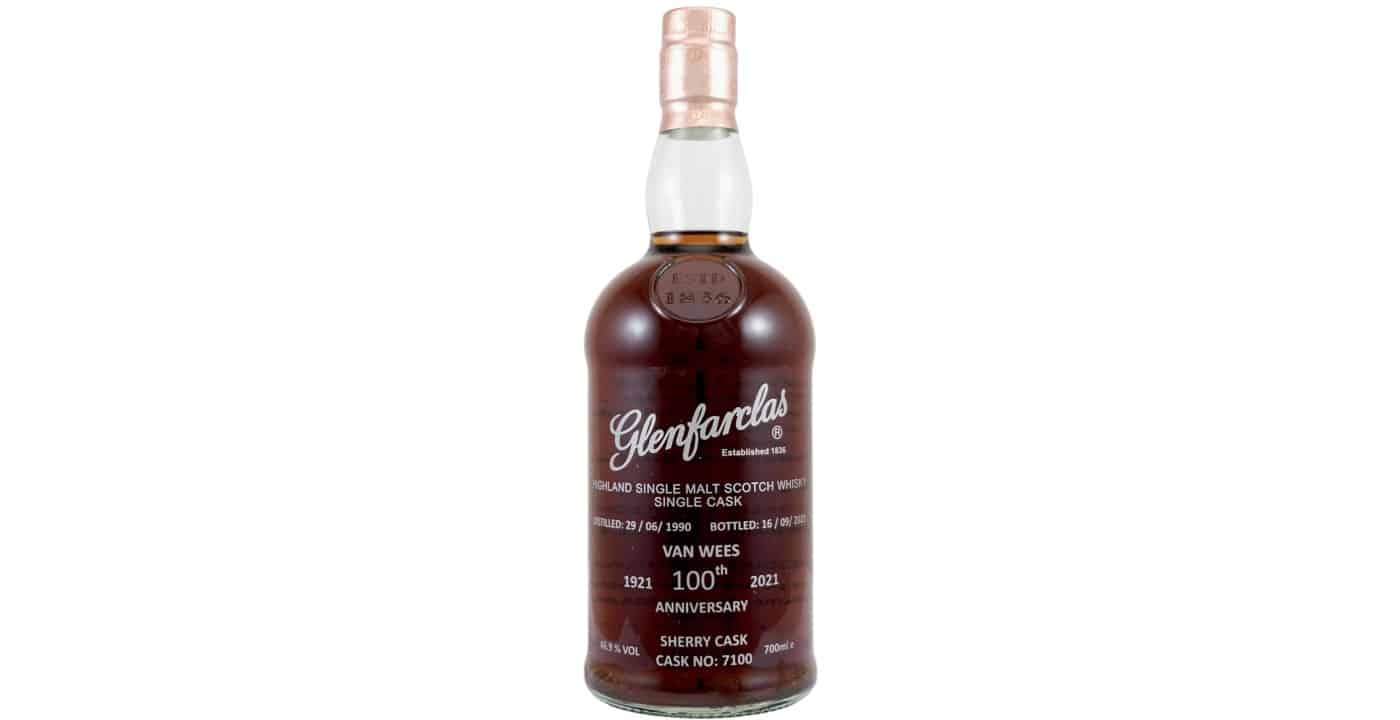 It’s been a sherry-forward week on Words of Whisky, as each of the bottlings for Van Wees’ 100th Anniversary matured in pretty active sherry casks. Today’s Glenfarclas 1990 31 Years is no exception. All signs point to it being the absolute highlight of this Dutch importer’s centenary line-up.

Glenfarclas and Van Wees are a perfect match. The Scottish distillery is family-owned, leans traditional and has an excellent reputation amongst whisky drinkers. Pretty much the same can be said for Van Wees. While the Grant family has the Van Wees family beat by about six decades, both have been involved in their business for multiple generations.

Van Wees was founded by Hubertus van Wees in 1921, originally selling tobacco. His sons Han and Ben joined him officially on January 1st, 1954. But the two brothers had been helping out in their father’s store since long before. However, the tobacco business was trending down, which is why Han van Wees decided to become a licensed spirits retailer not long after joining his father’s company.

There was one issue: there were only a limited number of licenses available in the City of Amersfoort. Showing his entrepreneurial spirit, Han came up with a clever ruse. According to the regulations he was allowed to start selling liquor unlicensed, as long as he sold more than 10 litres per transaction. So that’s what he did. And he never looked back.

Han’s son Maurice has been working in the business since 1987. He’s currently the managing director of Van Wees. And the fourth generation has entered the company as well, Julie and Joël — Maurice’s children and Han’s grandchildren. It looks as if the future of the company will be secure for many more decades to follow.

But back to the Glenfarclas 1990 31 Years. I rarely comment on packaging (unless it is ridiculous), but I can’t help but love the glass printed label for this 100th Anniversary bottling. It gives it a lot more cachet compared to the regular Family Cask label, while being priced similarly.

Nose: There’s notes of espresso and mocha, but also aged balsamic and touches of burlap and tobacco. A very traditional, old-school style that’s heavily sherried indeed, but far from over the top. Raspberry jam and fresh strawberries, then some bitter chocolate, peaches and tinned pineapples as well.
Taste: Lovely notes of black pepper, chocolate and mint, but also linseed oil and cherry liqueur. Then classic notes of prunes, dates and figs, followed by tobacco raisins and a cough medicine. It’s not without some spicy ginger and cloves too. It could sometimes be mistaken for a properly aged Armagnac.
Finish: Long with lingering stone fruits, as well as some apple, mint and breakfast tea.

Conclusion
This Glenfarclas 1990 31 Years for Van Wees' 100th Anniversary is firing on al cylinders. Undeniably one of the better whiskies I've had in recent memory. It's heavily sherried but never too narrow, swaying in different directions while never losing sight of its balance.
9.2