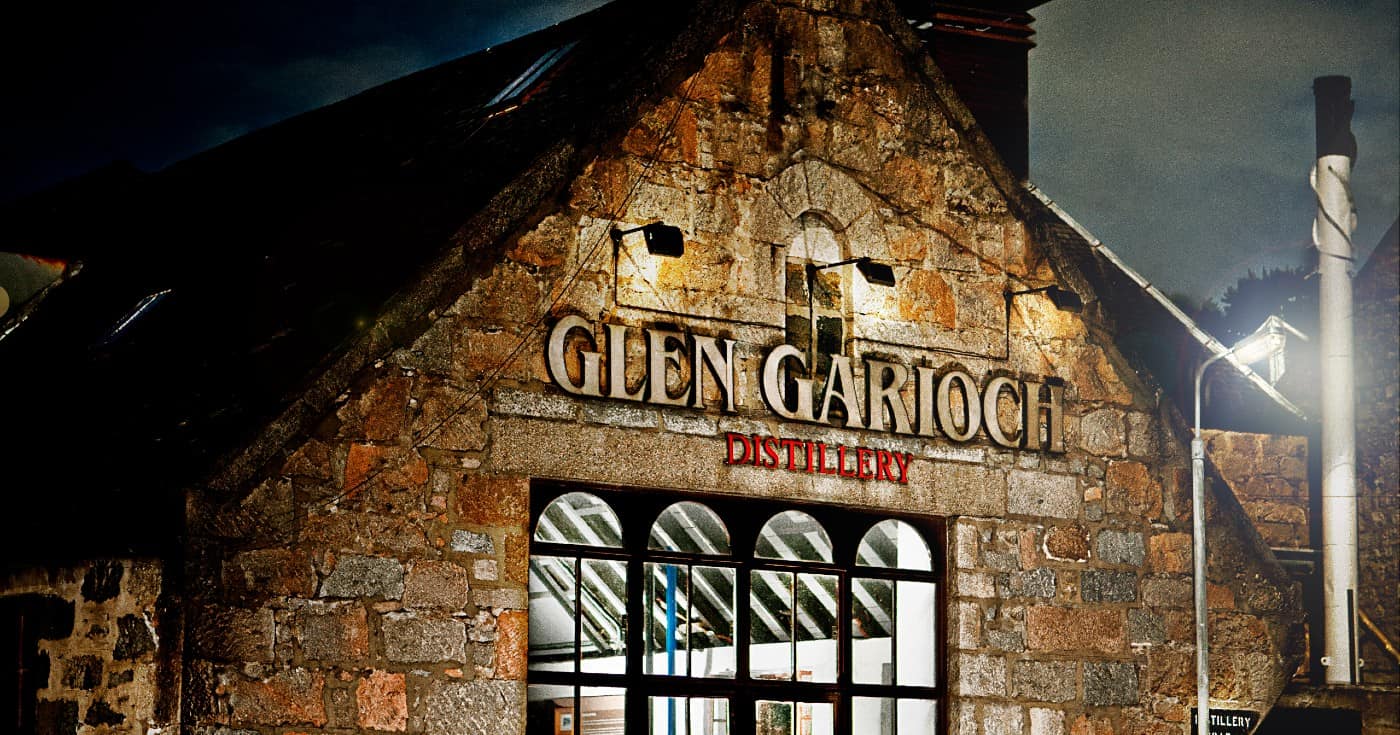 Thanks to a £6 million investment by owners Beam Suntory, Glen Garioch returns to traditional production methods, most notably a direct-fired wash still and floor maltings. I recently spoke in-depth to Distillery Manager Kwanele Mdluli about the changes at Glen Garioch. If you’re into nerdy details, you’ll love this.

It’s been almost a year since the restoration and upgrades of Glen Garioch were announced. The announcement was as surprising as it was remarkable, because installing a direct-fired wash still and reviving the floor maltings isn’t something you expect from one of the largest spirit companies in the world.

Even more so if you consider that they’d be reversing their own decision from the mid-90s. Shortly after acquiring Glen Garioch in 1994, Beam decided to shut down the floor maltings and to convert the pot stills to an indirect heating system. They also stopped using peated malt. And yet there it was in black and white on Beam Suntory’s own website. Glen Garioch would be going back to traditional methods. Whisky drinkers are a nostalgic bunch, so the announcement was applauded by pretty much everyone.

Distillery Manager Kwanele Mdluli was gracious enough to explain the thought-process behind the upgrades at Glen Garioch. Initially for an article in Whisky Passion, a Dutch magazine, but with his permission I’ll now also share other parts of our conversation that were left on the cutting room floor.

Kwanele Mdluli has been involved in the Scotch whisky industry for well over a decade. He is a biochemist and food scientist, and has previously worked for Diageo as manager of Glen Elgin and their Burghead Maltings. For the past three years he’s been working at Glen Garioch. Here’s part of our conversation, lightly edited for clarity and brevity.

What has been the most important reason for reverting to traditional methods?

“The primary driver for reintroducing the direct-fired still at Glen Garioch is all centred around enhancing the quality of the spirit that’s made. The process is still the same in terms of boiling up wash and making low wines out of it. But the key differences lie in the temperatures that are involved in the process.

“With an indirectly-fired still, the one that we had before the upgrade, we had steam coils in the wash still. They had a pressure of around 2,5 bar. Steam at that pressure has a temperature between 130 and 145 degree Celsius. Now that we are direct-fired, the temperature that we get in the furnace gets up to over 1000 degrees Celsius. So, we apply more heat to the process.”

What are the advantages of that extra heat?

“During the first distillation you have a famous chemical reaction taking place, the Maillard browning reaction. The ingredients that you have for that reaction are primarily the sugars that are left over from fermentation, as well as the product of the breakdown of proteins that are both in the wort that we extract, and the yeast cells.

“By the time we do our distillation the yeast cells have started to die. They release the contents of the cell. One of the things they release are proteins and the enzymes that break them down into amino acids. The left-over sugars and amino acids are the key ingredients you need for Maillard browning.

What is the importance of Maillard browning in whisky production?

“I mentioned the temperatures at the beginning. For every ten degree increase in temperature that you supply to a chemical reaction, you more or less double the reaction rate. In a direct-fired still we get more chemical reactions taking place to form the flavour compounds that are key for the caramel flavour you get in new make spirit. That carries through to your second distillation and ultimately to your new make spirit. It survives the maturation process very well over a number of years.

“In a nutshell, the main driver for returning to direct-firing is to get a more full-bodied spirit, but also the browning reactions giving you the compounds that are associated with relatively high temperatures and therefore enhancing your spirit quality and flavour.”

Why is only the wash still direct-fired, and not also the spirit still?

“Your reducing sugars and amino acids are not volatile, so they don’t get carried over into your low wines in any appreciable quantities for them to then be available for the second distillation. There’s very little Maillaird browning in the second distillation, because you simply don’t have the ingredients for the chemical reactions.”

It was mentioned that Glen Garioch’s direct-fired distillation method is state-of-the-art. In what way?

“Historically most distilleries in Scotland used direct-fired stills. There was a concerted move away from that for a number of reasons, including one that relates to spirit quality, which is a bit ironic because we now return to it for quality reasons.

“What used to happen before is that there wasn’t a means to control the boiler. When they turned on the direct-fire, either gas or oil, there would be so much heat supplied that the wash would boil over into the lyne arm and ultimately into the spirit safe. In turn they would basically turn the fire right down to try and stop the wash from coming over. That would reduce the boil-up rate, as it were, and distillation rate would be severely reduced. So, your constantly battling to get your distillation process into a steady state.”

How have you solved this issue for your new direct-fired wash still?

Finally, if the third and highest probe in the wash still is activated, the gas burner is completely killed off. We’ve sort of overcome that problem of ever having too much heat or not enough heat by using new technology that wasn’t available back in the day.”

“When you place the new make spirit right up against the old Glen Garioch from pre-direct firing, there are differences. You get more caramel notes, more burnt flavours and sweet notes coming through compared to what we had before. Which is more or less exactly what we were looking for.”

Have you started using peated malt at Glen Garioch again?

“No, we’ve not started using peat. We’ve had a number of trials using lightly peated malt that has been sourced from third parties. At the present moment, when we’re reinstating the floor maltings, we have no confirmed plans to return to peating on site. As things stand it is not part of the scope of the project.

“In early August we did a trial with lightly peated spirit, but I’ve not yet seen the result of the nosing for that. We have people on site that are capable of nosing, but the trained sensory panel is based in Springburn.”

Glen Garioch’s carbon footprint has been reduced despite now using more traditional methods. How is that possible?

“The direct-fired still is part of a new heat-recovery system that was installed at Glen Garioch. You might’ve expected us to become less energy efficient with the direct firing, but this system has made the site more energy efficient. When everything is running as well as it should be, which it has for the last six months, we’ve seen close to a 15 percent reduction in energy usage.

“The heat-recovery system utilizes the waste heat from the wash still burner to heat up water. That water is then used to heat the charges to your wash still and spirit still, as well as providing a significant heat requirement to your mash house.

“Before the cooling system was what is called a once-through system for both the wash and spirit still. The wash still is now a closed-loop system. The wash still condenser produces hot water that is connected to the heat-recovery system.

“We’ve seen a 46 percent reduction in the total amount of water used to make a litre of alcohol. Almost halving the amount of water that we’re using by simply converting that condenser. It is definitely a template for what Beam Suntory could do on other sites.”

Why is it important for Glen Garioch to bring back the floor maltings?

“Again, it relates to the spirit quality of Glen Garioch. In this day and age you can get your malt from commercial maltsters that produce thousands of tonnes per week. I think there are key differences in quality compared to your own malted barley. The process is the same; you steep barley, let it germinate and kiln it. But the levels of maltification in floor maltings are different from what you get in a commercial maltings.

“The primary purpose is to make starch available for enzymes in the grain to break down into sugars, which are then fermented by the yeast. Because you don’t have the same degree of control in floor maltings, you can argue that the maltification isn’t as good as in commercial maltings. It means that you could have a slightly higher protein content in your malt, because it isn’t broken down as much.

“But remember when I was talking about the Maillard reaction? The breakdown of proteins into amino acid is a key ingredient. So, because of the floor maltings you have more of the ingredients that you need for the flavour compounds that you’re looking to create in the wash still. That’s how it all comes together.

“The malt is less efficient in terms of yield, but the trade-off is the quality of the spirit that you are then making. You could argue it is then slightly more superior than what you otherwise would have.”

How do you use the knowledge of sister distilleries Laphroaig and Bowmore?

“Once our floor maltings our completed [in the early part of 2022, Ed.] we’ll be relying heavily on the knowledge of our sister distilleries. We’ve recently employed four maltings operators. We sent them across over to Islay to spend time at Laphroaig and Bowmore to see how they do the floor malting process.

“When our floor maltings are ready, we’ll be going through another adjustment period. Obviously, we have to get our new maltings operators up to speed with how to make the malt. The second part of the challenge would be how we then make adjustments to for instance our mill. We would have to be very watchful to how we do the grind of our floor malt and get the most out of it. Yes, there may be losses in yield, but of course we want to optimize our process to get as much out of it as we possibly can.”

Massive thanks to Kwanele Mdluli for sharing his wealth of knowledge. Talking to him (and others like Kwanele) is always such a pleasure and incredibly educational.