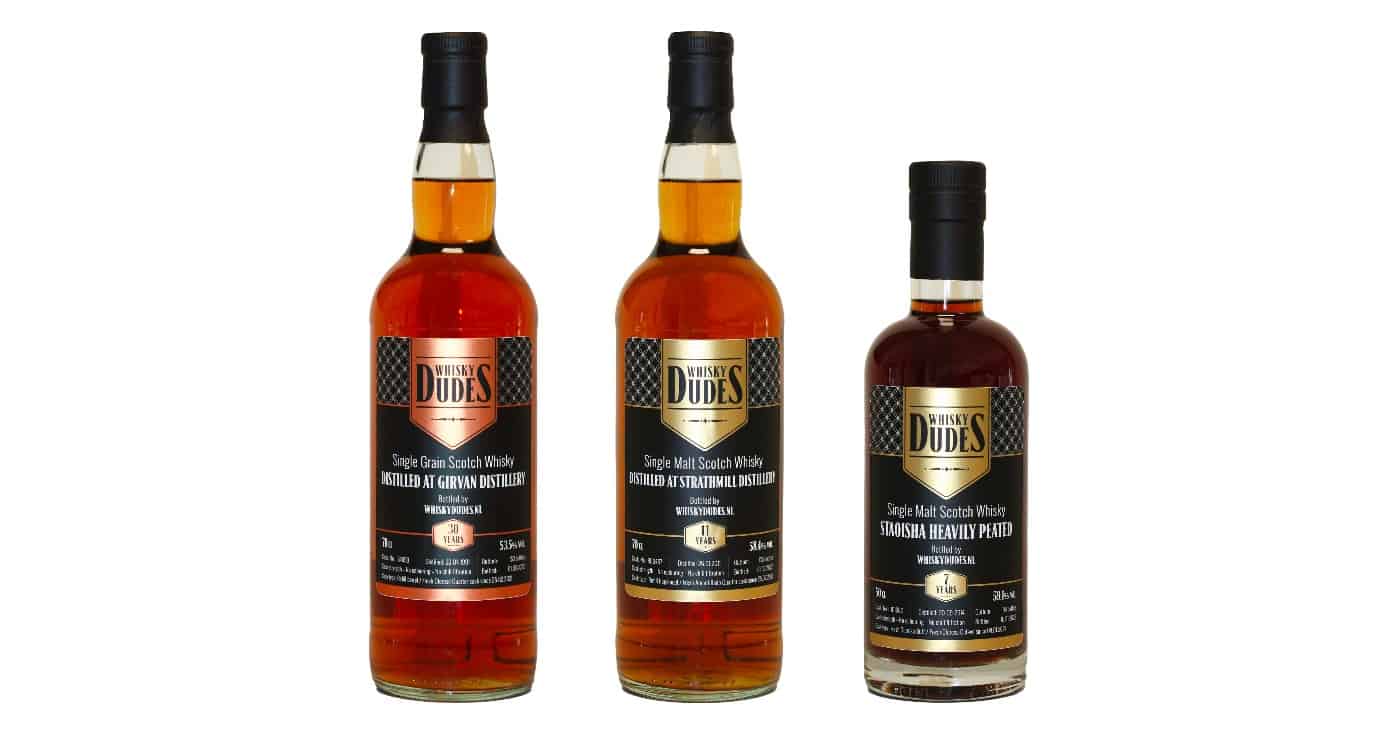 It doesn’t even seem that long ago since the previous batch of releases from the Whiskydudes arrived. And yet here’s another trio from this small independent bottler from The Netherlands: an 11-year-old Strathmill, 7-year-old Staoisha and 30-year-old Girvan. So far I’ve enjoyed most of their releases and have been impressed with Edwin’s ability to make the right decisions about which casks to re-rack his whiskies into.

A single grain whisky from the Lowlands, this Girvan 1991 30 Years first matured in a refill barrel, but was re-racked into a fresh Oloroso sherry cask on 25/02/2021. It was then bottled a year later. Only 153 bottles are available.

Nose: Zesty oranges and wood glue, which is somehow a trademark for pretty much every Scotch grain whisky – in my experience at least. Hints of toasted oak and some resin, followed by meringues, Werther’s Original and fudge, but also a whiff of roasted coffee beans. Finally a sliver of dried peaches and sultanas. All in all quite appealing.
Taste: A good amount of oak spices on the arrival (cloves, cracked black pepper corns), but also sweet treacle, cappuccino, a whiff of mocha, and some herbal touches too. Think sage and maybe even some fennel seeds. Did I mention the creamy mouthfeel? It’s excellent and seems even more creamier after adding water.
Finish: Lingering spices, herbacious and somewhat grassy even. Medium in length.

Conclusion
I always have a hard time with Scotch grain whisky, because I find its flavour spectrum to be somewhat limited compared to malt whisky – no matter the age or at which grain distillery it is made. This Girvan 1991 30 Years from the Whiskydudes is no exception, but it is undeniably good at the same time.
8.8

A whisky rarely bottled as a single malt; this is only the second Strathmill review on Words of Whisky. After initially maturing in a refill hogshead, this Strathmill 2011 11 years was re-racked into a fresh Amontillado quarter cask on 25/02/2021 and bottled a year later. Only 135 bottles are available.

Nose: A touch of hops accompanied by luscious fruits – classic orchard vibe with apple peel, pear skin and quince jelly, but also whiffs of apricots, yuzu and brown sugar. Given time there’s the slightest hint of umami, even some soy sauce, and water brings out gentle floral touches and honey.
Taste: A sweet, somewhat buttery first impression followed by a peppery, ginger-y arrival. There’s walnut skins and hazelnuts, but it is lacking the fruitiness of the nose. It might just be a little hot. Water brings some balance though. It highlights the barley, but brings out some sweet pastries and stone fruits as well.
Finish: Soft fruits, a hint of chalk and minerals and finally a whiff of toffee. Medium in length.

Conclusion
While the nose shows an unexpected maturity and is rather gentle, I can’t say the same for the palate, which might not be the most polished. However, adding water clearly worked well for me. It restored some balance and lifted the entire experience. I can see this Strathmill 2011 11 Years from the Whiskydudes developing rather well throughout its lifecycle in the bottle.
8.3

You might remember the Whiskydudes bottled another Staoisha (distilled at Bunnahabhain) from a refill sherry butt a little while ago. The rest of that cask was divided amongst an assortment of smaller casks, of which this new Staoisha 2014 7 Years is the first to be bottled. It spent its final year of maturation in a fresh Oloroso octave cask. Only 98 bottles (0.5 litres) are available.

Nose: Grilled beef, cured meats and a touch of rubber with a sliver of bitter chocolate. There’s some spent matches here, but pushed more into the background compared to the previous release. Finally a nice coastal influence and maybe even a quick hit of iodine, but also whispers of blackcurrants and dates.
Taste: The oily, thick mouthfeel immediately stands out. There’s a sliver of rubber and gun powder, but it works with the peat and sherry. A nice salinity, pinch of pepper, and liquorice too. And there’s tar, diesel, bitter chocolate and burnt toast as well. Maybe even a medicinal touch. Add a good splash of water and it brings out cereal notes and some fermented mash.
Finish: Lingering notes of sulphur, a drop of iodine and more meaty touches as well. Long.

Conclusion
A little darker and more intense than its younger brother, and just as bold and in-your-face. Not exactly the same but it clearly shares a big chunk of DNA. If you liked the previous Staoisha by the Whiskydudes, there’s no reason you won’t enjoy this too.
8.7

All finished in small sherry casks, but these are three very different whiskies from the Whiskydudes. There’s a clear market for the Girvan and Staoisha. Well-aged grain whiskies usually find an audience, as do sherry-matured peat monsters.

I’m not entirely sure about the Strathmill. The amontillado certainly adds some welcome elements and I feel has enhanced the spirit. I enjoyed it, but maybe it would’ve benefited from a slightly lower abv? Then again, I also respect Edwin’s choice to bottle it at cask strength and leave such a decision up to the drinker. 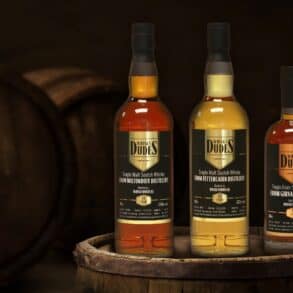