Fun Tasting, Too Bad About The Fake Whisky

The Dutch Usquebaugh Society celebrates its 25th anniversary this year, and I don’t believe I’ve written anything about it yet. As a member, I should’ve blogged about this earlier. But as I wasn’t able to attend celebratory tastings held earlier this year, I thought I’d wait for the official anniversary tasting, which was held about a week ago. But now that I finally do write about the anniversary, it’s not exactly an uplifting post. Although all the attendees of the anniversary tasting had a fun afternoon (proof is in the photo above), sadly one of the whiskies turned out to be a fake.

Top notch
The tasting was wonderful. I want to state that first and foremost. We tasted top notch stuff. Clynelish 1982 from A.D. Rattray, Tomatin 1980 from Getränke-Weiser, our own Glen Garioch 1990/2015, which to be honest isn’t exactly my favourite, but Serge seemed to like it, scoring it 90 points. And also the Talisker 25yo (2006-edition), Bunnahabhain XXV, Caol 1979 from Blackadder, and this years Feis Ile-release from Lagavulin. All for 40 euro.

But what should’ve been the highlight of the tasting, turned out to be the low point. The Springbank 25yo, bottled in 1998 as part of the exclusive and rare Millennium Collection, certainly looked very promising. And my first impression was also one of intrigue. It smelled nothing like any other whisky I ever had. A strange, but interesting burned edge with lots of coffee notes. At first I found the whisky to be promising. I wondered what else it had to offer. But the nose stayed pretty much the same. Not much depth there. And when it came to tasting… eww!

Baby’s first fake
It quickly became clear that this Springbank was a fake whisky. Everybody agreed that the liquid inside the bottle probably wasn’t whisky. Was it even a spirit drink? I doubt it. Since I don’t often taste exclusive older bottlings such as this Springbank, this was my first ever encounter with a fake. So in a way it turned out to be an interesting experience. Baby’s first fake 😉 But all kidding aside, fakes are a real problem. 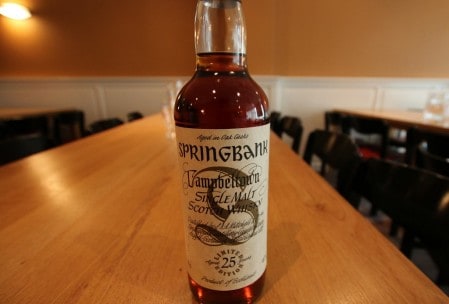 The anniversary tastings of the Usquebaugh Society have been done using the same format since 2010: 20 year old whiskies for the 20th anniversary, 21 year olds for the 21st, etc. Our board decided that starting next year it will no longer possible to do these kinds of tastings with the quality of whisky they want. To explain, we started the anniversary tasting looking back at the lineup of the 2010-edition. No disrespect to the lineup of this years tasting, but it couldn’t hold a candle to the one from five years ago. To illustrate, this incredible 20yo Rosebank was one of the whiskies tasted. It now sells for 1250 euro at auction, if you’re lucky. There’s no way the Usquebaugh Society can include whiskies like these in their current tastings.

Whisky fakers
The above goes to show how much more expensive whisky has gotten. Which you of course already know, assuming you’ve been drinking whisky for longer than six months. But why are we talking about whisky prices? Because the influx of fakes and the rise of prices are directly related. If 100 euro is all you can get for a fake bottle of whisky, than the incentive to risk a fine or jail time even, isn’t very high. But if your profit rises to hundreds or even thousands per bottle, now that’s an incentive. Especially considering that lots of collectible bottles will never be opened, making the risk of getting caught pretty low.

Fakes have been around for a long time, and they probably won’t go anywhere soon. Serge Valentin for example started his war on whisky fakers years ago. There’s not much we can do except warn each other whenever we can and inform the authorities if necessary.  What’s left for us is to be careful when buying older bottles, especially from premium distilleries with lots of collectible bottles, such as Macallan and Springbank. Buying via a respected whisky auction helps, but even then you’re at risk. Whisky fakers sometimes work on an almost professional level, and there are plenty of fakes that are really hard to spot, even for very knowledgeable people.

All that’s left to say is: beware of whisky fakers!