While last week I took a closer look at the younger siblings, it is now finally time to examine and (hopefully) enjoy the new 17 and 21 year old Barrel Aged Genevers from Filliers. As you don’t often encounter a genever of such a respectable age, reviewing two in one post is actually quite decadent.

Like I explained previously, these genevers are made from 100 percent maltwine. The malt wine is distilled from corn, malted barley and rye, before maturing in American oak ex-bourbon casks. The only botanical used for these expressions is juniper, which is added (in very small quantities) after maturation.

Nose: Quite a bit of oak, with aromas of furniture polish and vanilla, as well as pine needles and a pinch of juniper. There’s a hint of grapefruit here as well, accompanied by a mossy, heathery quality.
Taste: Sweet and creamy at first, before transcending into menthol and cough syrup territory. It has a spicy quality too, with a subtle chili heat, as well as ginger.
Finish: Lingering aniseed, with gentle sweetness.

Nose: A whisper of chocolate with burnt peanut skins, as well as candied raspberry and strawberry, accompanied by a whiff of orange, vanilla and fudge. There’s an edge of pickled ginger to it.
Taste: Lots of warming spices, such as cinnamon and cardamom, accompanied by a whiff of juniper, cigar tobacco, and some caramel sweetness. Finally a touch of mandarin liqueur.
Finish: Lingering sweetness, as well as some menthol.

Two properly aged Genevers like you won’t encounter too often. You really can’t go wrong, but I enjoy the 17 year old just a little better. In a way it reminds me of some Irish pot still whiskies (which is a good thing). 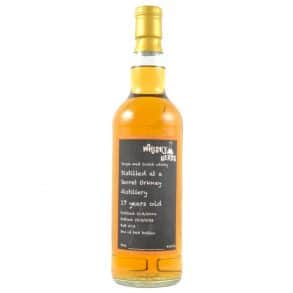