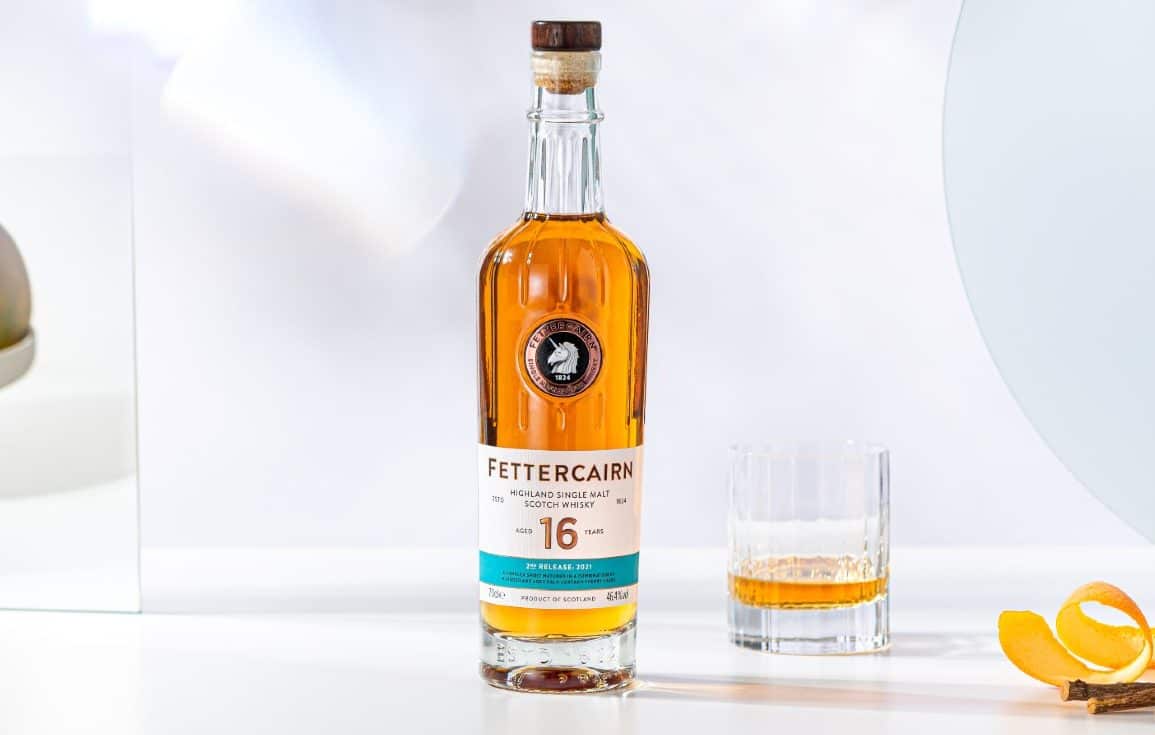 The recipe for the new Fettercairn 16 Years 2nd Release combines both sherry-matured and sherry-finished whisky, including first-fill and refill Oloroso casks, as well as first-fill Palo Cortado sherry butts. According to the distillery the Fettercairn 16 Years 2nd Release has retained the tropical house style of the distillery, while taking on the “bold sweetness of the dark and nutty Oloroso […] complemented by refined vanilla and citrus notes from the aged Palo Cortado butts.”

While I’m always glad to receive fairly detailed information on cas usage, there’s no mention at all about the barley, which is what made the 1st Release so interesting. It matured in first-fill ex-bourbon and was finished in sherry and port casks, but was distilled from chocolate malt (more commonly used by brewers). That means the malt is kilned at much higher temperatures.

There aren’t many, but one of the more well-known single malts made from chocolate malt is the Glenmorangie Signet. I would’ve loved it if Fettercairn had build upon their barley focused 1st Release, but instead the Fettercairn 16 Years 2nd Release relies only on cask types for differentiation. I shouldn’t be too surprised, because creative cask usage is kind of Whyte & Mackay‘s modus operandi.

Anyway, here are the prepared statements from some of the people involved in crafting the new Fettercairn 16 Years 2nd Release. (Just skip to the end if you’d like to know the price and when it will be available.

Gregg Glass, Master Whisky Maker, said, “This one-off Fettercairn 16 Years Old limited edition was borne from fully-matured Sherry casks combined with hand-selected, rare and old, Oloroso and Palo Cortado Sherry butts. For me, this was about retaining the natural beauty and balance of our Fettercairn tropical house style while elevating the pure beauty and refinement of select, aged Palo Cortado and Oloroso casks. Combining these elements allow us to share another aspect and dimension to our truly unique warehouse stocks at Fettercairn.”

Kirsteen Beeston, Head of International Malts at Whyte & Mackay, said, “The enthusiasm and love we saw for our first 16 Years Old reinforced our desire to create whiskies inspired by our enlightened whisky making philosophy. This 16 Years Old reveals finely balanced tropical and soft spice flavours and showcases the approach we take to making single malt.

“This time around, we’ve called on rare Palo Cortado which is an elegantly dry Sherry alongside the dark richness of Oloroso, to add a special flair to this single malt and showcase the excellent maturation expertise coupled with the ripe tropical distillery character when the spirit reaches the late teen years. We are confident that this year’s 16 Years Old will be another Fettercairn release that excites and enthrals whisky drinkers.”

The Fettercairn 16 Years 2nd Release is available across Europe from December, including France, UK, the Netherlands, Germany and Belgium. It’s bottled at 46.4%, natural colour and non-chill filtered. The recommended retail price is £69.

Previous
The Macallan A Night On Earth In Scotland (2021)