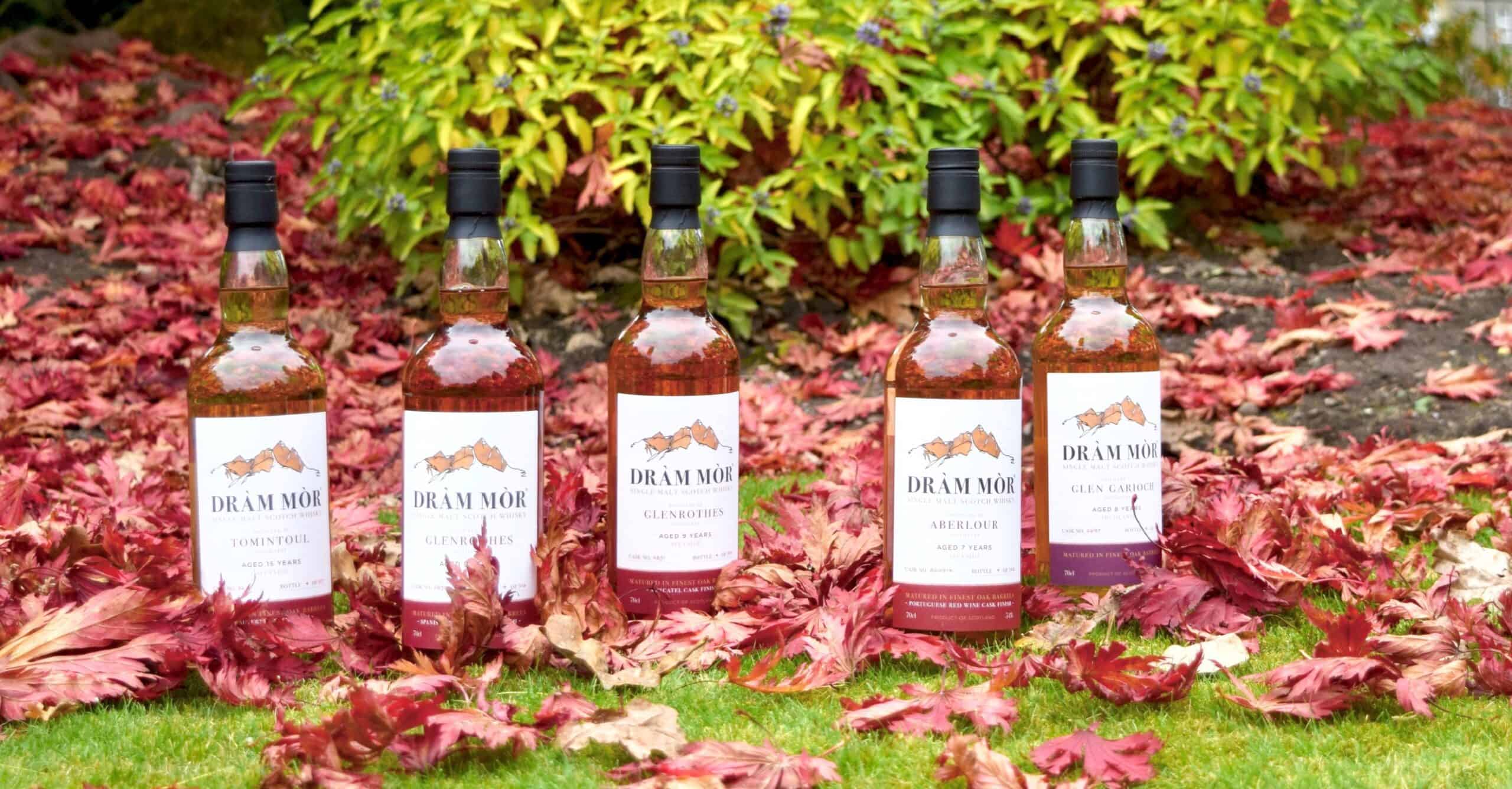 Apologies, because these reviews have been long overdue. I received samples of Kenny and Viktorija MacDonald’s latest releases in early October, but due to a variety of reasons (including a nasty cold and participating in the Blind Tasting Competition), I had trouble finding time to properly sit down for this selection of single malts from Dràm Mòr’s important “second album”.

Their inaugural batch of whiskies featured some very nice picks, including a wonderful Ben Nevis and fun BenRiach. For their latest batch of single malts they’ve chosen to apply finishes to four out of their five offerings. One of them (the Aberlour) went a little longer then they would’ve liked, due to COVID restrictions. Their bottler worked with less staff, so instead of a three month finish, the Aberlour stayed in a Madeira cask for an additional five weeks.

Enough of a preamble. Let’s get to it!

Matured in a refill bourbon hoghead.

Nose: Fruity, green and vanilla-led with a touch of brown sugar and olive brine, but also some furniture polish. Some soft chalky notes, red apple skin and a whisper of conifer and oak shavings too. Attractive and balanced.
Taste: Big spicy arrival (black pepper, nutmeg) with a grassy touch and orchard fruits, but also some light green veggies. A gentle sweetness led by honey and vanilla. Soft touches of charred oak.
Finish: Lingering orchard fruits.

Initially matured in a refill sherry butt for 15 years. Finished in a 1st fill Sauternes barrique for 4 months.

Nose: It’s light and citric, with notes of Greek yoghurt and lemon zest catching my attention. A whisper of cookie dough too, as well as honey and a touch of star anise. Finally some lovely sweet stone fruits. Gentle and enticing.
Taste: A creamy mouthfeel and rather spicy at first (white pepper mainly). Also somewhat herbal, but quickly followed by soft red fruits as well as a touch of vibrant lemon zest and Port stewed pears. Finally a whiff of honey.
Finish: Lingering spices and a touch dry. More of the above.

Initially matured in a refill bourbon cask for 8 years. Finished in a 1st fill Moscatel wine barrigue for 4 months.

Nose: Gentle red fruits and some notes of pickled oranges, but also vanilla pods, chalk, a gentle menthol aroma and charred oak. Finally some oat cookies. Really rather good and well-integrated.
Taste: The oakiness vibes well with the vibrant fruitiness. Lots of sweet, candy-esque lemon, clementines and oranges, presumably from the Moscatel cask. Some chili heat in the backgrounds.
Finish: Ginger, pepper and jammy oranges. Long.

Initially matured in a refill bourbon cask for 8 years. Finished in a Spanish red wine barrique for 4 months.

Nose: Gentle spices like cinnamon and a whiff of cracked black peppercorns, but also a profound nuttiness; mainly roasted peanuts. There’s touches of fresh raspberry and strawberry syrup as well. Finally some oak shavings.
Taste: Quite a dark, intense red wine influence that I quite enjoy. Maybe a touch of sulphur, but pretty much negligible in such a way that it rather adds to the complexity of the dram instead of taking away from it. Red dried fruit, orange peel and tannins with some soft spices.
Finish: Spicy, a tad drying and bitter oranges. Long.

Matured in a bourbon hogshead for 7 years and 6 months. Finished in a Portugues red wine cask for 4 months (Madeira barrique).

Nose: Notes of rhubarb and lager, which may sound weird but it’s actually quite enjoyable. Also touches of vanilla pudding. There’s cloves here, as well as a whisper of cocoa powder and ripe red apples. Finally some pear skin.
Taste: Clearly a mixture of young, bourbon matured Aberlour with a veneer of red wine influence. Gentle spices, soft notes of star anise and some cranberry as well. Quite enjoyable.
Finish: Lingering notes of honey, some oak spices as well.

Quite an eclectic mix of single malts from Dràm Mòr. While I’m usually an advocate for clean, naked whisky’s without too much of a cask influence, I can completely see the value of the finishes applied by Kenny and Viktorija on some these younger malts.

I found it worked especially well with the red wine finished Glenrothes, which is my favourite of the bunch. On the other hand, the refill bourbon matured Glen Garioch certainly has a lot of redeeming qualities, even after only 8 years of maturation. Surprisingly, the oldest of the bunch rated lowest for me. I’m not quite sure if the Sauternes finish added much, maybe it even took away some.

If you’re interested in any of Dràm Mòr’s offerings, here’s a list of retailers you can check out.