Words of Whisky will have a theme this week: sherried whiskies! That of course, is a very broad theme that literally gives me thousands of reviewing options. So let me narrow things down for you, so that you know what to expect over the next seven days.

The Sherry Project started out as a simple head to head tasting, but has now turned into a comparison between five cask strength sherry drams. All of them (except for maybe the Glengoyne) are considered benchmark whiskies and are (or used to be) very affordable. By doing this comparative tasting I’m hoping to find out which one is the ‘benchmarkest’ of them all. Let me tell you how this project came about.

A couple of months ago I bought the Glengoyne CS Batch #1. It wasn’t a high profile buy for me, and expectations weren’t particularly big. But when I poured myself a glass back home, I was pleasantly surprised by this excellent whisky. Up until that moment, Glengoyne had flown below the radar for me. But now I wanted to know more, particularly about this cask strength batch I had bought. After some Googling, I quickly found out that Serge Valentin shared my enthusiasm. One thing in his review stood out: “I think I should do a HtoH with the new Glendronach CS one day”, he wrote.

So yeah, I stole my idea of doing a head to head tasting between the Glengoyne CS and the Glendronach CS. Since I also have the Glenfarclas 105 at home, I decided I could just as well make it a comparison between three great sherry whiskies. Then a couple of weeks ago, fellow blogger Michael Bendavid posted this on his excellent blog Malt and Oak. Turns out he also had plans of analyzing a couple of sherry staples, and he reminded me I shouldn’t forget the Aberlour a’bunadh. To be honest, I should’ve thought about that classic myself. Either way, my little project had now grown to a comparison between the Glengoyne, Glendronach, Glenfarclas and the Aberlour.

For those of you who can count up to five, you know that there is still one whisky missing. If there is one brand that is synonymous to sherry, it is The Macallan. Many will say that in recent years they have been surpassed by Glendronach, but they (used to) make great sherried whiskies. Case in point. So I added the Macallan 10yo CS to complete the quintet of whiskies to be reviewed for The Sherry Project. It has been discontinued for some time now, but it will be nice to see if the modern sherry whiskies can keep up with what has been the brand for sherry matured whiskies.

To be as unbiased as possible, I’m tasting all five blind. I’m going to share my findings with you in the coming week: one whisky every workday, in alphabetical order. And the weekend after that I’ll post a round up in which I declare one whisky the winner of The Sherry Project. I hope you’re excited. I sure am! 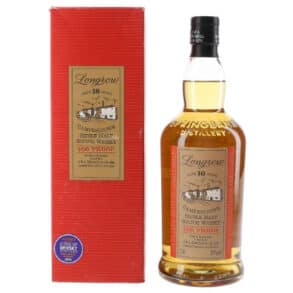