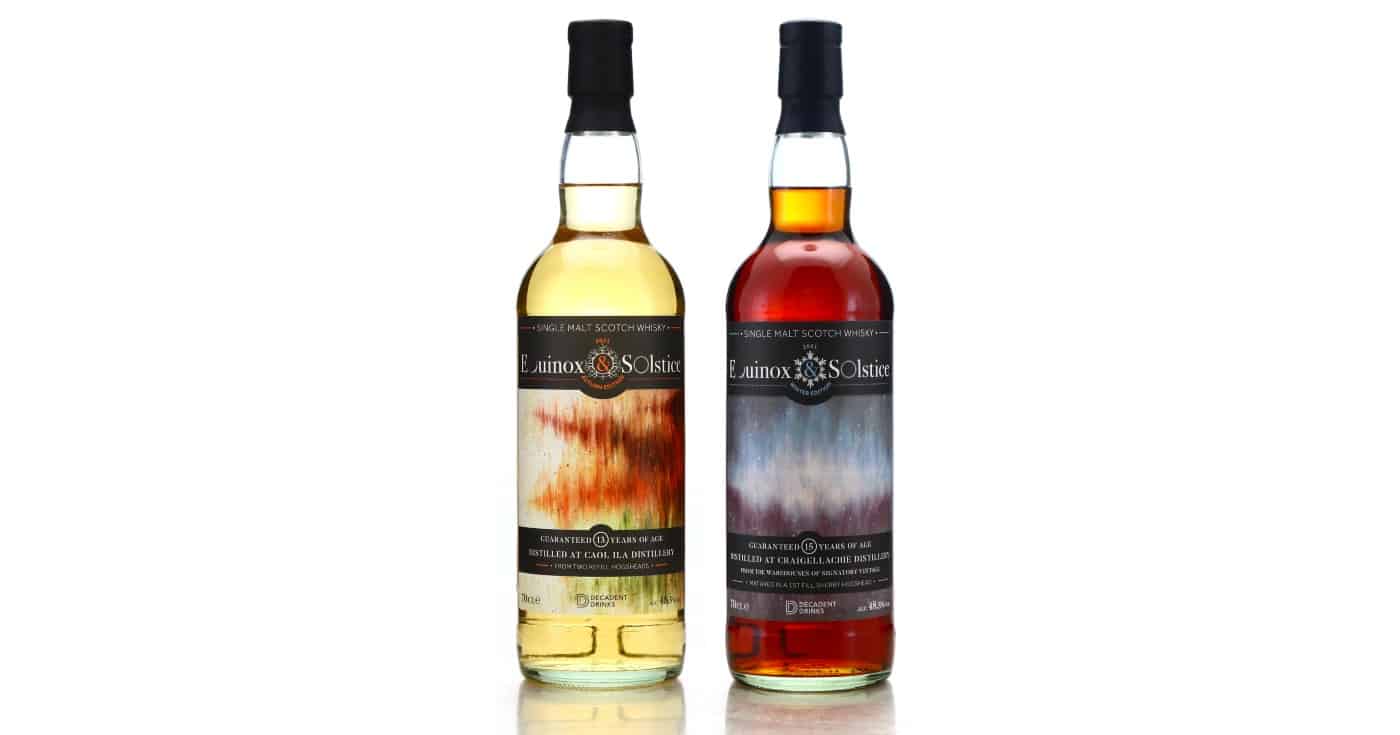 The release of the Craigellachie 2006 15 Years brings the first Equinox & Solstice series by the Decadent Drinks to an end. This seasonal and philosophically minded series of independent bottlings were designed to be uncomplicated and easily quaffable. Since I was still sitting on a sample of the Autumn release, I figured I would review the Caol Ila 2007 13 Years as well.

Each of the Equinox & Solstice releases is bottled at a slightly lower strength of 48.5 percent, which fits the easy-drinking theme. The amazing artwork (I truly love this style!) is designed by E K Fitzgibbon. I’ve no idea who he is, but I’ll certainly be following him on Instagram from now on.

Decadent Drinks have already announced the series will return for a second run at the Spring Equinox in 2022.

Matured in a first-fill sherry hogshead, the outturn for the Craigellachie 2006 15 Years Equinox & Solstice was 412 bottles.

Nose: Fairly polished and well-behaved with notes of cocoa powder, cassis and cinnamon, as well as raisins and prunes followed by just a whisper of burlap. Finally a touch of aniseed.
Taste: A somewhat spicy arrival with cracked black peppercorns and cinnamon, followed by mocha and cappuccino, as well as a a hint of crushed mint leaves. Sweeter notes linger in the background, such as a touch of marzipan and ripe forest fruits, but there’s some burnt toast and bitter chocolate as well.
Finish: More of the above. Medium to long.

Nose: Fairly clean, unadulterated Caol Ila. Coastal notes with kippers, tar, creosote and plaster. But also peanut skins, olive brine, and seaweed. Then ozone and wet pebbles as well as pickled lemons. You can’t really go wrong with Caol Ila, now can you?
Taste: Thick, creamy mouthfeel with some vanilla custard, but also seaweed and a nice salinity. Some proper wood smoke, as well as charred lemon peel and limes, but also interesting floral and grassy notes. Much more atypical than the palate.
Finish: Lingering citrus notes with lavender and faint wood spices.

Caol Ila 2006 13 Years Conclusion
While the nose of this Caol Ila 2007 from the Decadent Drinks is pretty straightforward, the palate is very eclectic and different from anything else I've tasted from this distillery. A very unique addition to the Equinox & Solstice range.
8.7

The Caol Ila 2007 13 Years and the Craigellachie 2006 15 Years perfectly represent the seasons that they were picked for. While the Caol Ila is not a textbook example from this distillery, it works great with autumn weather. The same can be said for the Craigellachie, which doesn’t show much distillery character due to the heavy sherry influence, but is perfect for the wintery festive season.