The best whisky tasting in the world. Now that’s quite the statement. But after taking it for the second time late last year, I’m convinced that the Cadenhead Warehouse Tasting fits that bill.

The quality of the whisky the Cadenhead people put in front of you, is of a very high level. And the surroundings in which they do it are just awesome. And the host is top-notch too. Man, I still dream of the 19 year old Springbank that was part of the line-up.

Okay, so you really can’t get a better tasting anywhere in the world? Of course you can. Well, maybe not you. Unless you have great connections within the whisky industry. Or if you’re blessed to count a couple of generous collectors among your circle of friends. Maybe you are such a collector yourself.

I do have some connections, but not nearly enough to get unlimited access to whichever distillery I want to visit. And I’m too young to have secured a stash of rare and old whisky in time before the incredible price increases of the last 6 or 7 years. And I’m certainly not rich enough to do it now. What I’m trying to say is, for us regular whisky folk, the Cadenhead Warehouse Tasting is top of the bill.

But what the hell is so special about the Cadenhead Warehouse Tasting? I feel there are a couple of components that, when combined, make it a truly unique experience. You taste straight from the cask. You do so in Warehouse No. 9, an old-fashioned, mouldy dunnage warehouse. There’s plenty of time for the tasting. When I did it, it lasted almost three hours. 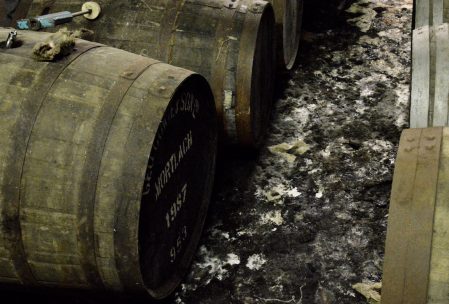 You taste 6 or 7 whiskies from Cadenhead’s portfolio, meaning whiskies from different distilleries instead of one distillery, which is the case when you do a warehouse tasting at a distillery (such as the Lagavulin Warehouse Demonstration). Total cost? 30 pounds. Unless of course you decide to bring home one or more of the whiskies. Because that is probably the coolest feature, as you can buy bottles of the whiskies you liked best. You fill them straight from the cask.

Am I starting to convince you? Good! Let me convince you some more, by letting you join me in the experience I had during the Cadenhead Warehouse Tasting.

The first time I took the Cadenhead Warehouse Tasting was in 2014, as part of a rather epic sailing trip along the Scottish isles on the West coast. It was the absolute highlight of a trip that basically was a string of highlights. So when I returned to Campeltown two years later – this time by rental car instead of a tall ship – I was rather looking forward to a renewed acquaintance with Warehouse No. 9.

The party starts right in the middle of Campbeltown, just outside Springbank Distillery. It’s there that my girlfriend and I wait for Mark Watt. There’s three Americans and two Scots waiting as well, they’ll also be participating. Mark Watt is a whisky nerd extraordinaire, except he also is general manager of Cadenhead’s.

Mark is known to be quite outspoken. It’s a reputation he quickly confirms when greeting us. ‘I’m in a bitter mood today’, he says. I don’t believe I mind, because I love when industry people don’t censor themselves. Especially when it comes to more controversial subjects, like No Age Statement, caramel coloring or chill-filtration.

We follow Mark to a remote corner of the Springbank site, to a sanctuary also known as Warehouse No. 9. Upon entering the room I immediately get transported back to my first visit. The smells are so recognizable. Everybody who has set foot in an old, musty dunnage warehouse knows what I’m talking about. 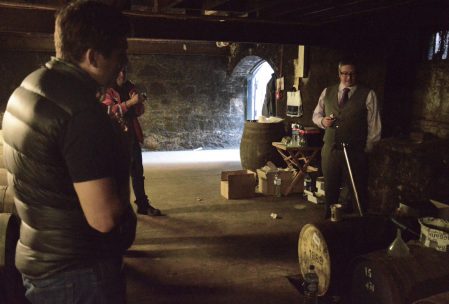 The aromas of the angels’ share, the damp oak, and the earthen floor. And mould everywhere. Not just the infamous black fungus you often see in the vicinity of whisky warehouses, but also layers of thick, white fungus. Which might sound disgusting in any other setting, but it is a lovely sight when inside a warehouse.

Mark points to an exceptionally furry patch of fungus on the ground. ‘Watch it. Last week a lady slipped and fell. We never found her again.’

Butts, hogsheads, puncheons, barrels. Mortlach, Caol Ila, Springbank, Caperdonich. This warehouse is packed with candy for adults. Mark leads us to an ex-bourbon cask, filled with Glentauchers 1989. ‘You know, it’s actually kind of boring to bottle Ardbeg, Springbank or Highland Park?’, he says. ‘It’s often great whisky, but you’ll sell it regardless because of its reputation. The real challenge is to find hidden gems, like this Glentauchers.’

He is obviously proud of this particular whisky. Although… ‘The first whisky of a tasting often isn’t any good, because you’re taste buds still need to warm up.’ Why then let us taste this Glentauchers first? Whatever the case, Mark is right. While certainly a tasty whisky, at 55 percent this Glentauchers is a bit much as a starter.

During the Cadenhead Warehouse Tasting, Mark is there to provide entertainment. Not by bombarding us with an endless stream of jokes, but by being blunt an honest when talking about the current state of the whisky industry. An unfiltered version of Mark, if you will.

‘I grew up with Macallan’, he says. ‘We lived right around the corner of the distillery. It used to be MY whisky, but currently Macallan is more of a disappointment. And now I just found they demolished the house I grew up in for their new Teletubby-distillery.’

The next cask opened up contains whisky with a more familiar name. Mortlach is a favourite among many whisky enthusiasts, although the luxury 50cl perfume bottles it comes in nowadays don’t particularly help in that regard. It’s a development not lost on Mark. ‘You don’t drink packaging, right? That’s why we don’t spend too much money on it.’ 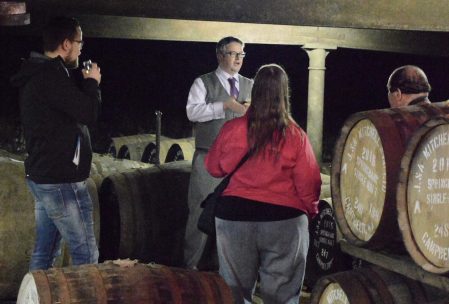 Almost 30 years this Mortlach has been resting, as it was filled into an ex-bourbon cask in 1987. The long maturation period has somewhat tamed the Beast of Dufftown. Although it still provides quite the attack on the taste buds. In a good way! Yep, the tasting has really taken off now.

Next up is whisky from a now demolished distillery. ‘Closing a distillery is the best way to give your sales a boost’, says Mark. While probably true, there’s not much hype surrounding the more recent Caperdonich bottlings (from the nineties). It’s popularity does not begin to compare to Littlemill, for example.

Has Caperdonich really become that much more attractive since it was closed? The Caperdonich tasted in Warehouse No.9 is admittedly excellent. Distilled in 1996 and filled into an ex-bourbon cask, it has spend the last three years in an ex-sherry hogshead. The balance between bourbon and sherry influence is spot on. If this is what Caperdonich can be, than maybe a new hype will materialize sooner rather than later.

Mark doesn’t feel like sharing how many casks of whisky are owned by Cadenhead’s, except that it is a significant amount. To illustrate, Hedley Wright (chairman of J&A Mitchell & Company, the company that owns Cadenhead’s) recently handed Mark a list of 500 casks. None of those casks were on Marks’ radar (‘A bit strange when you’re the general manager’), but have been property of Cadenhead’s for years.

It’s an example of Wright’s easy-going management style. As is the fact that Mark apparently doesn’t have any hard sales targets, somewhat of a foreign concept for someone with a sales background. And something that was unheard of at his previous employer, independent bottler Duncan Taylor.

‘I still had that sales mentality when I started my job at Cadenhead’s. I noticed that we had so many casks of one particular distillery, that we could release multiple single cask bottlings every year for forty years. So I decided to see if they wanted to buy some casks back. But Wright stopped me. He said I had to lose my sales mentality. Which is great, because it means I can really focus on quality.’

Meanwhile we’ve arrived at an Auchentoshan 1999. Not just any Auchentoshan, because it was transferred into a ex-Chateau Lâfite cask in 2009, which makes it interesting, to say the least. Not my preferred flavour profile though, as it is quite sulphured, an element that sometimes adds some depth to a whisky, but in this case is more of a distraction. The influence of the wine cask overshadows the light Auchentoshan spirit. Not my favourite.

But after this relative low point of the Cadenhead Warehouse Tasting, we move on to the highlight. From the moment we walked into the warehouse, I’ve had my eye on this cask. I had already read about it on Diving for Pearls, one of my favourite whisky blogs, which basically described it as pure heaven. I’m talking about a Springbank 1997 from a re-charred sherry butt. 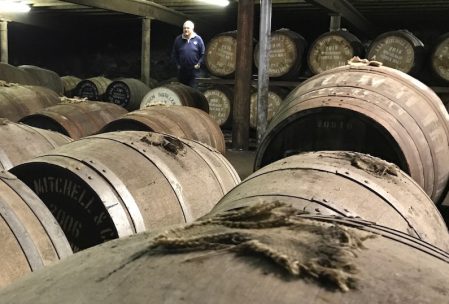 It is the Springbank distillate at its best, combined with a restrained influence from the sherry cask. A religious experience almost. The whisky gods took excellent care of this cask. Mark: ‘People sometimes think Cadenhead must own a lot of Springbank casks, simply because we’re part of the same company. The truth is, we only have about twenty.’ That’s too bad, because Mark might find it boring to bottle Springbank, I wouldn’t mind if he could do it more often.

The Cadenhead Warehouse Tasting is not very structured. Informal is actually a better description. Mark just talks about whatever comes to mind, also leaving a lot of room for questions. I wonder about the scarcity of whisky available for independent bottlers, and Mark is happy to give some insight.

‘For a while it’s been difficult to buy good casks and good whisky. But lately I notice the situation is improving. I focus on buying casks that contain young whisky, somewhere between three to six years old. The supply in that segment is pretty good. And we are fortunate enough to be able to give that whisky more time to mature. It also gives us a chance to monitor the development of the whisky ourselves.’

We end the Cadenhead Warehouse Tasting with a short trip to Islay. First up is a Caol Ila that matured for over 25 years in a bourbon hogshead. I’m of the opinion that old, mature Caol Ila is among the best that Islay has to offer. An opinion shared by Mark. ‘I’m not a fan of young peat bombs with all their smoke and iodine. I get the appeal, especially if you’re at the start of your whisky journey. But no, it’s not subtle.’

Luckily, this particular Caol Ila is exactly that. Glorious subtlety. Only a mild peat and smoke influence is left after a quarter of a century. And it’s very creamy too! Our final dram is a Bowmore, the youngest of the afternoon, but still a respectable 15 years old. A lovely, fruity ending, although it doesn’t reach some of the heights already visited earlier. 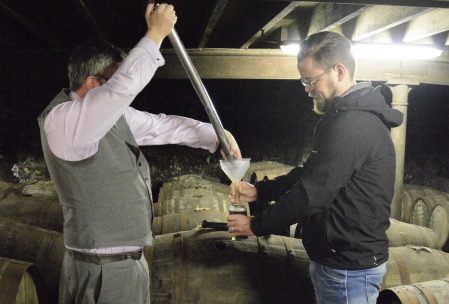 Probably the best moment of the day arrives now. In a corner of the warehouse awaits a pallet with empty bottles. Time to grab a few and fill ’em. I’m going to take some of that Springbank home, for sure. But the Mortlach and Caperdonich are also more than deserving of making the trip home to The Netherlands. The best thing about the hand-filled bottles? Every time I pour myself a dram from one of these bottles, it takes me back to this glorious afternoon in Campbeltown.

I don’t know what to do if you’re still not convinced about the Cadenhead Warehouse Tasting. Maybe you should visit Campbeltown and experience it yourself? I’m absolutely guaranteed that you won’t be disappointed!

A Dutch version of this article previously appeared in the magazine Whisky Passion. 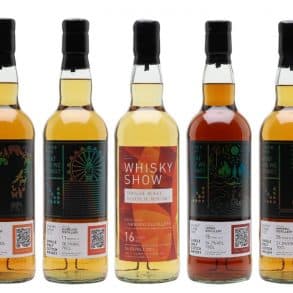 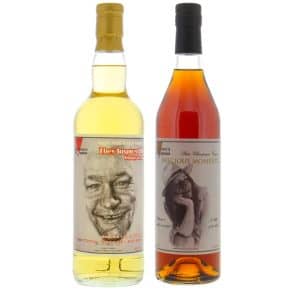